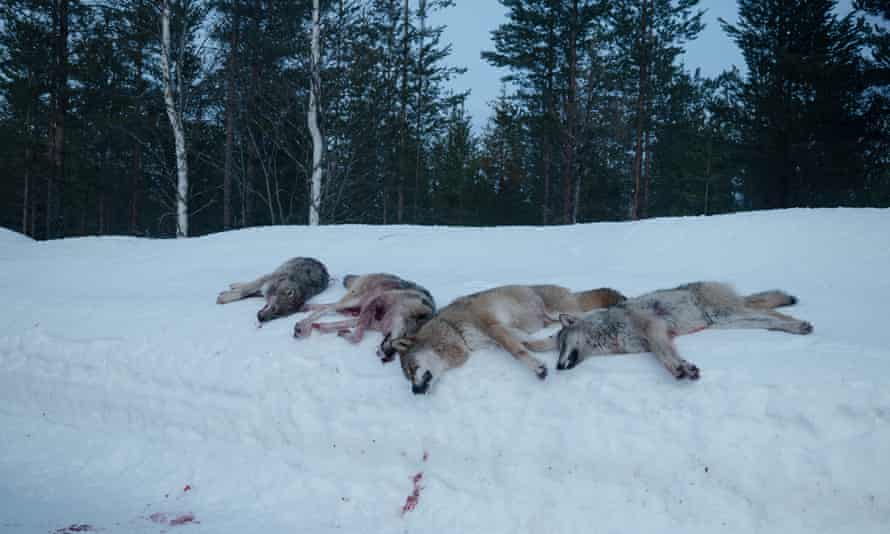 Set against a snow-capped landscape, a group of hunters wait to hear if the government will permit their yearly hunt, while the environmentalists grow ever more fearful of what lies ahead.

With violent threats voiced on both sides, this film takes a detailed look at how the presence of the wolf affects the lives of different communities.

With unique access to remote communities in the snow-capped landscape of Norway, this film follows characters on either side of a fierce debate on whether to cull the wolf population.

For decades the topic has split political parties, families and communities across the country, with environmentalists world-wide criticising Norway for how it handles its tiny population of critically endangered wolves.

Here, a group of hunters await news from the government on whether their yearly hunt will be permitted, while the environmentalists anticipate the worst.

With angry threats on both sides, the film takes a deep dive into what’s at stake for both groups, as well as the wider world

What inspired you to make this film?

I have been fascinated by the amount of conflict wild predators create in Norway. Over the years I’ve seen comment sections filled with raging debates, and I was curious about what created that amount of hatred and emotion on both sides.

Much of the news stories I could find were shallow, and I wanted to dig deeper into the topic and try to understand it better.

How did you come across this story and these characters?

I had a few months looking through news articles, talking with people on both sides of the conflict and meeting different hunters.

The hunters have a strong hierarchy, so it took a few months gaining their trust in the project. As far as

I know, it’s been around a decade since a film or news crew have been allowed to document the wolf hunt in Norway, so they are a bit secretive.

And that is also because the hunters receive so many threats.

What was your creative vision for this film?

I wanted to take both sides seriously and try to equally understand both. Wolf hunting is one of the most polarised topics in Norway, probably next to immigration and climate change.

I wanted to make the debate a bit more nuanced and show how the conflict affects real people on the ground.

What was your most memorable shoot day?

Everything had been leading up to whether the government would allow the wolf hunt or not that year.

The decision came 13 hours before the hunt was supposed to start, and as a filmmaker I was keen on showing the wolf hunt.

So I was kind of relieved from a professional point of view. The hunt was on 1 January 2020, so I spent New Year’s Eve with the hunters, and a few hours after the rockets were sent up in the sky, they headed out into the forest.

Sitting still for a few hours in the snow waiting to see if we would see the wolves, was very interesting and a day I will not forget easily. And yes, it was freezing!

You dig deep into both sides of the debate – were you persuaded towards one side more than the other?

Coming from the big city, where wolves are not present in our lives, it’s easy to think that humans should stop interfering with nature.

But after hearing the hunters’ descriptions on how it affects their life, I also had a lot of sympathy for that point of view.

So I’m going for the most boring answer: I think I’m somewhat in the middle now.

What’s the current status of your characters? Are there any updates?

Both Tore and Ola are relieved since they really put themselves out there in a heated debate.

They have received positive responses from their community, and many have expressed how they are glad that the documentary shows a more nuanced picture of the situation.

But the hunt is still ongoing. On 1 December this year the hunt began outside of the designated wolf zone. And on 1 January 2021, it might begin again within the wolf zone.

That will definitely stir up a lot of emotion.

A year on from when you filmed this, has the government changed its policy?

But what’s interesting is that a political party in Norway, Senterpartiet, has gained a lot of voters lately is are now the second biggest political party, according to the polls.

Their leader has expressed that he would like to get rid of all the wolves in Norway.

If they gain power in the election next fall, that could have a huge impact on the political debate around wolves.

This article by Kyrre Lien was first published by The Guardian on 9 December 2020. Lead Image: After the hunt, in the film The Wolf Dividing Norway Photograph: Kyrre Lien/The Guardian. Kyrre Lien is a visual journalist based in Oslo, Norway. His long term projects and assignments mainly focus on humanitarian issues, conflict and challenges in our society. In 2017 his documentary The Internet Warriors was featured in the Guardian. Lien has also worked for The New York Times, Der Spiegel, Bloomberg, Aftenposten and VG. In 2017 he was named by Forbes Magazine as one of 30 young media entrepreneurs “defining the ever-shifting world of news and content”. He has won several awards nationally and internationally for his work.