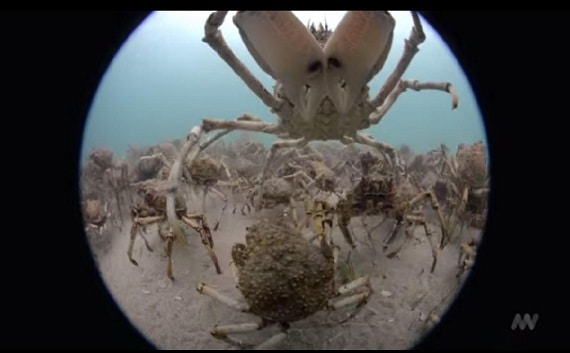 Australia is famous for its teeming, colorful biodiversity like sea turtles, giant clams, and coral, but it’s the Great Barrier Reef that often receives the most attention for its wildlife.

Of course, other areas around Australia boast an incredible amount of unique wildlife, like the Ningaloo Marine Park along Australia’s West Coast, for example, that hosts whale sharks each March and April as they come to feed.

In a new video released by Museum Victoria, located along the southern coast of Victoria, Australia, new footage provides a glimpse into even more of Australia’s magical diversity – this time off the lesser-known Victorian coast.

In the video, senior curator of marine invertebrates at the Museum, Julian Finn, uses a fish-eye lens to film dozens of marine animals, including playful harbor seals, curious fish species, and – arguably the highlight of the short clip – the astounding migration of thousands of giant spider crabs.

Every year, hundreds of thousands of giant spider crabs congregate in Port Phillip Bay, Australia to migrate together to shallower waters to molt. By marching in such large numbers, the giant spider crabs are able to better protect themselves from hungry predators like seals and rays, according to Museum Victoria. They simultaneously molt in about an hour, reports The Dodo.

Finn shot the video for Museum Victoria’s Underwater Backyard, a video exhibit where underwater footage plays on a dome screen and gives visitors an idea of what’s occurring off their coast.

This article was first published by Oceana.org on 24 Nov 2014.