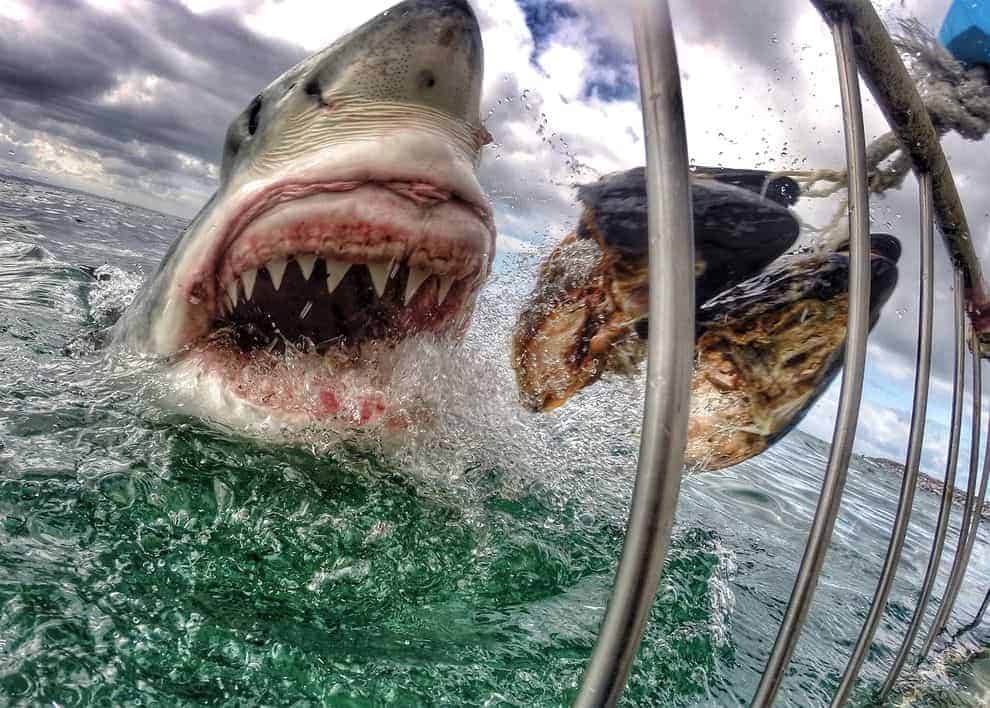 A schoolteacher’s dramatic photo of a great white shark has gone viral, inspiring a lively Internet debate about whether it’s ethical to bait sharks, many of which are threatened species, so that tourists can see them up close.

The buzz-worthy photo, which shows the shark lunging for fish bait, looks like a frame from a Steven Spielberg movie. But it was made by a young New Jersey teacher who spent the month of August cage diving in South Africa.

The amateur diver and photographer, Amanda Brewer, 26, took the photo of the female great white shark off Seal Island in Mossel Bay, South Africa, then uploaded it to National Geographic’s Your Shot community.

The primary school art teacher from New Jersey told National Geographic that she was serving as an intern with the eco-tourism company White Shark Africa. (White Shark Africa has not responded to requests for comment.)

“I wasn’t afraid at all,” Brewer says of her encounter while cage diving. “Once you see them up close, you gain an enormous respect for them. They’re beautiful, powerful, and intelligent, and it erases all the fear.”

Brewer said she made the image with a GoPro camera she had purchased just before her trip. The camera’s fish-eye lens made the shark seem closer and more menacing than it was in real life, she noted. After she posted it online to Instagram and Your Shot, people started sharing it heavily, perhaps because of the photo’s intense sense of action. (The image was also featured in Your Shot’s Daily Dozen.)

A Shark in Danger?

Some observers have expressed concern about how close the animal appears to the cage.

Ricardo Lacombe posted on the White Shark Interest Group Facebook page: “Bait usage is fine in my book as an attractant, but dragging it at the cage like this is asking for trouble for the shark. So disappointed this shot is getting so much coverage … but a chance to try and educate people I guess.”

Responding to the criticism, Brewer told Grind TV that White Shark Africa never pulls bait into or even directly toward cages.

“The person was pulling the bait around and out of the way of the cage [to Brewer’s right] so that shark wouldn’t go near the cage at all,” she said. “That’s one thing that we learned right off the bat, is that you never want the shark to make contact with the cage.”

Gregory Skomal, a senior fisheries biologist who studies sharks for the state of Massachusetts, told National Geographic that fears about this shark hitting the cage are probably overblown. “In my opinion, it’s not likely the shark would be injured by the cage,” he says.

“These are remarkably tough animals,” he adds. “I have seen them heavily scarred up by each other, with parts having been bitten off, and they have an amazing capacity to heal.”

Are Shark Cages and Baiting Harmful?

A more important question, says Skomal, is whether the use of diving cages could injure sharks in the long term, by teaching them to associate human beings with food.

Most sharks find people alien to their environment and tend to avoid them, the scientist says. But if sharks begin to associate people with the scent or presence of bait, aka food, they could become more aggressive or start to approach fishers, looking for a meal. (See “Scientists Track a Great White Across the Atlantic for the First Time.”)

Trouble is, there is very little data to support that hypothesis, so Skomal says that has left the scientific and conservation communities to speculate and debate.

“It’s a little like the debate over zoos,” he says, “with some people saying they don’t think caging animals is good for them and others saying there is a benefit to education.”

Dolphins sometimes get into trouble by becoming too friendly with people, says Greg Stone, a marine biologist and executive vice president of Conservation International who has studied dolphin behavior around humans. He has not studied the same process in sharks but says that it’s logical to think it could happen. (Stone has received two grants from National Geographic over the years, the most recent in 2000.)

As for whether baited sharks start to associate humans with a meal, Brewer told reporters that White Shark Africa takes care to ensure sharks don’t actually get to eat the bait. “You don’t feed the sharks; that’s not what we want to do,” she said.

But, Stone says, “whether they get the bait or not, if you are providing them with scent or bait you are altering their natural system.” He notes that he has been on dives in which people baited sharks “and they got aggressive.”

“So I’m not a big proponent of baiting sharks,” he says.

Still, there are exceptions, Stone says. “I’ve been out with National Geographic photographers in remote areas and they needed to get pictures, so they used bait. But it was probably the first and last time those sharks ever experienced that, so it’s not a big deal. But if you do it routinely, you alter the system.” (See “Great Whites Thriving in U.S. Waters.”)

National Geographic underwater photographer Brian Skerry said via e-mail, “The reality is that with very, very few exceptions, a person/diver/photographer will never see a shark up close without attracting it.” Exceptions include certain schools of scalloped hammerheads, nurse sharks resting on the bottom, and whale sharks, he noted.

“But nearly every other predatory species has little interest in approaching humans and certainly never on a predictable basis,” Skerry noted. “So a powerful image will simply never happen without bait.”

A study of tiger sharks in 2012 found no evidence of harm to sharks that were being routinely fed on tourist dives in the Bahamas, Skerry added.

But Stone cautions that the number of operations and cages in the water may be too much. “I think some of those sharks are probably getting habituated,” he says.

“Citizen science is a great idea, but I’d rather see people count seals along the coastline or collect other types of data that are really needed,” says Stone. “I’m not sure if going out and swimming with the dolphins or diving in a shark cage in a place where everybody has studied great whites is going to add anything.”

The response to the viral photo “has been enormously positive,” says Brewer. “It’s getting a lot of people talking about sharks.”

This article was first published by National Geographic on 08 Oct 2014.