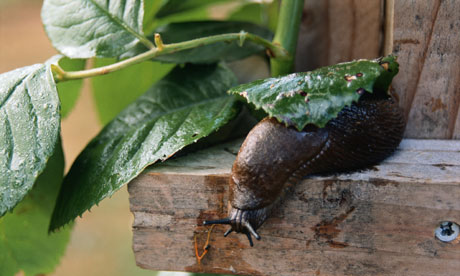 Last month, it was revealed that levels of a toxic pesticide more than 100 times the EU limit were present in a source of English drinking water. The discovery of record levels of metaldehyde – a chemical used in slug pesticides – was reported by Natural England and the Environment Agency at the River Stour, which supplies water to homes in Essex and Suffolk. There’s currently no treatment method available to extract this chemical from drinking water – once it’s there, we’re drinking it.

This isn’t a sudden unexpected situation. The same problem occurred in many areas across Britain last autumn – when slug numbers exploded after the wet spring and summer, conditions that we’re seeing emerge again. The problem was identified in autumn 2007, when new analytical techniques allowed testing for metaldehyde, and since then a voluntary stewardship programme with guidelines for the use of the chemical has been instituted. Yet this clearly isn’t working.

The obvious source – and use – of slug pellets is gardens, but what many may not know is that huge quantities of this chemical are being used to grow rape seed oil, winter beans, sugar beet and brassicas such as broccoli. That’s reflected in the fact that the NFU offers a briefing on the issue. But one disturbing thing about that briefing is its focus on the chemical’s use and alternative chemicals. The idea of integrated pest management does not even get a look in.

The main predators of slugs in the UK are hedgehogs, frogs and wild birds, while microscopic predatory nematodes and carabid beetles can also be important.

Given the increased slug population, we might expect populations of those animals and birds to have increased. In fact, the reverse has happened. The People’s Trust for Endangered Species reports that hedgehog numbers have fallen by more than a third since 2004 – and have collapsed from more than 36m in the 1950s, to fewer than 1m today. A number of factors are likely to have contributed to this, including loss of hedgerows, greater number of roads and increased housebuilding in areas of countryside (all issues that require urgent attention in the UK).

Nonetheless, the juxtaposition of these two facts – about slug poison being slung around and slug predators dying out, is telling. It’s hard to imagine a single situation that better illustrates the dangers to human welfare and the environment posed by our current approach to farming, as well as the lack of understanding of our precarious environmental situation, and the paucity of research and action to deal with it.

As this useful Clean Rivers Trust briefing on the issue indicates, while nematodes might offer excellent biological control, there’s a paucity of research around their use, and potential for serious problems arising from it. And advice to farmers is concentrated on chemicals – not how they might encourage frogs, hedgehogs and wild birds to their benefit, and that of us all.

Understandably, local media coverage of the metaldehyde in drinking water has focused on potential impacts on human health, but the water company fairly points out that you’d have to drink roughly 1,000 litres of water a day to be seriously poisoned.

The current voluntary system isn’t working, we’ve got a threat, if hard to quantify, to human and ecosystem health. It’s clear that regulation to protect both is needed.

Further, we clearly have to take a broader view of farms as part of our environment, and understand that they have to work with and support our natural ecosystems, not attempt to manage unfavourable aspects of them with chemical blankets.

We’ve already seen the government dragged kicking and screaming to an EU ban on neonicotinoids (despite opposition from our own secretary of state for the Environment, Owen Paterson), the pesticide linked to alarming rates of bee death across the western world. And triazoles could be next.

Farmers are currently backed into a corner. Food buyers, particularly the largest supermarket chains, have cut the amount they pay to those who produce the food we all rely on, which has forced farmers to ‘industrialise’. Government advice to farmers too pretty well amounts to “get big or get out”. The NFU takes the same approach.

Yet it’s clear that industrial agriculture, vast fields of monoculture that are wildlife deserts, are not sustainable. We need to work towards a new form of agriculture, one that works both environmentally and economically to give us secure, affordable food supplies – and which by bringing down the scale and reshaping the landscape could also provide many more jobs along the way.

And for gardeners doing battle with slugs? There are alternatives, too: beer traps for one. And if a dog gets into a beer trap, well you’ve just got a happy dog, unlike the case with metaldehyde pellets.

This article was written by Natalie Bennett for the Guardian UK.

Frightning and this is an agent in the U.K.s barren countryside for sure. Pesticides slung around!

Frightning and this is an agent in the U.K.s barren countryside for sure. Pesticides slung around!