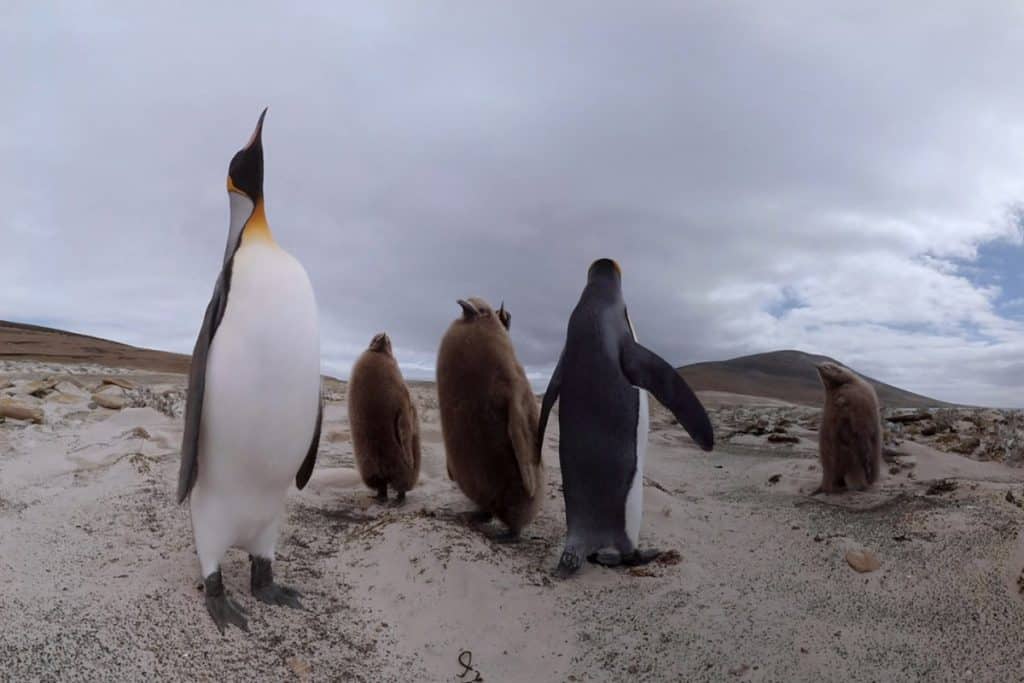 For the first time, you can instantly transport yourself to a sub-antarctic island and immerse in the lives of penguins—thanks to a new 3D 360-degree film launched today

Walk with Southern Rockhopper, King, Magellanic, and Gentoo Penguins on a remote island, in a new short film produced with Visualise for BirdLife International’s “Protect a Penguin” global campaign, to raise awareness that over half of the world’s penguins are threatened with extinction.

Amidst the sound of trumpeting parental calls, with wind buffeting against its fluffy feathers, a King Penguin chick walks right up to you and stares you in the eye. You duck your head as an albatross soars overhead, whilst another nests on a rock ledge just above you.

As penguins squabble for a shower you feel almost splashed by water, and you sense the exposure as you peer over a cliff and watch a line of Southern Rockhoppers Eudyptes chrysocome jump up the steep slope to their colony.

When you take off the virtual reality headset, with a bit of a dizzy wobble, you feel like you have seen the world from the perspective of a penguin—and it’s a tough realisation.

BirdLife has worked with virtual reality producer, Visualise, to create Walk with Penguins, an engaging 3D 360 short nature film—the first of its kind—to bring the daily challenges and lives of remote penguin colonies to you, and to raise awareness about threats to penguins, the second-most threatened group of seabirds (after albatrosses).

You can watch online in high-quality 360 video on YouTube (embedded above—click to view full-screen), or for the full experience, watch via the YouTube app or Google Cardboard app, using a cheap cardboard frame that allows you to use your phone as a virtual reality headset. The only thing that is missing is the smell of a real colony…

Despite being loved the world over, over half of the world’s penguins are threatened with extinction (ten out of 18 species) due to competition with fisheries, bycatch, marine pollution, disease, habitat disturbance and climate change. Urgent action is needed to better protect them, but public awareness of their situation is low, so on 10 April, we launched our campaign Protect a Penguin.

Richard Grimmett, Director of Conservation, BirdLife International, said: “BirdLife Partners across the globe are already working to tackle some of the threats to penguins, but the size of the challenge demands that efforts are redoubled. Using 3D 360 film, we can get people closer to penguins and give people that magical feeling of being with them—and ultimately that can lead to a greater support for their conservation.”

During the five-month project to capture penguins in their native habitat, the Visualise production team travelled to the Falkland Islands in November 2016 (during the breeding season) and filmed incredible scenes using the Google Jump stereoscopic camera system in 3D 360, which provides unfettered, intimate action with penguins and their offspring.

Filming proved a major challenge, using untested camera rigs on precipitous cliff faces and in remote environments with no infrastructure. The team had to balance the necessity of getting near to the penguins, to ensure great 360 shots, without upsetting the birds in their natural habitat, and the net result is one of the world’s first nature films shot using 3D 360 technologies—never before has the action of penguins been captured in such immersive detail.

Will McMaster, Head of Virtual Reality at Visualise said: “We have loved working with BirdLife and the penguins they are supporting on this project. This film is one of the first nature documentaries created in stereo 360. While most 360 film is shot monoscopic, and therefore has no depth, stereo 360 means that the viewer can see the physical depth of the scene. This means that audiences will be able to feel even more like they’re there, like they could almost reach out and touch the penguins, rocks and the sea. We hope this unique level of immersion will provide an emotional connection with audiences and generate greater support for the campaign.”

“As the sun sets on the penguin colony within which you stand, and you learn of their plight through the voice over, you can’t help but feel an emotional connection”, said Grimmett.

This article was first published by BirdLife International on 19 Apr 2017.