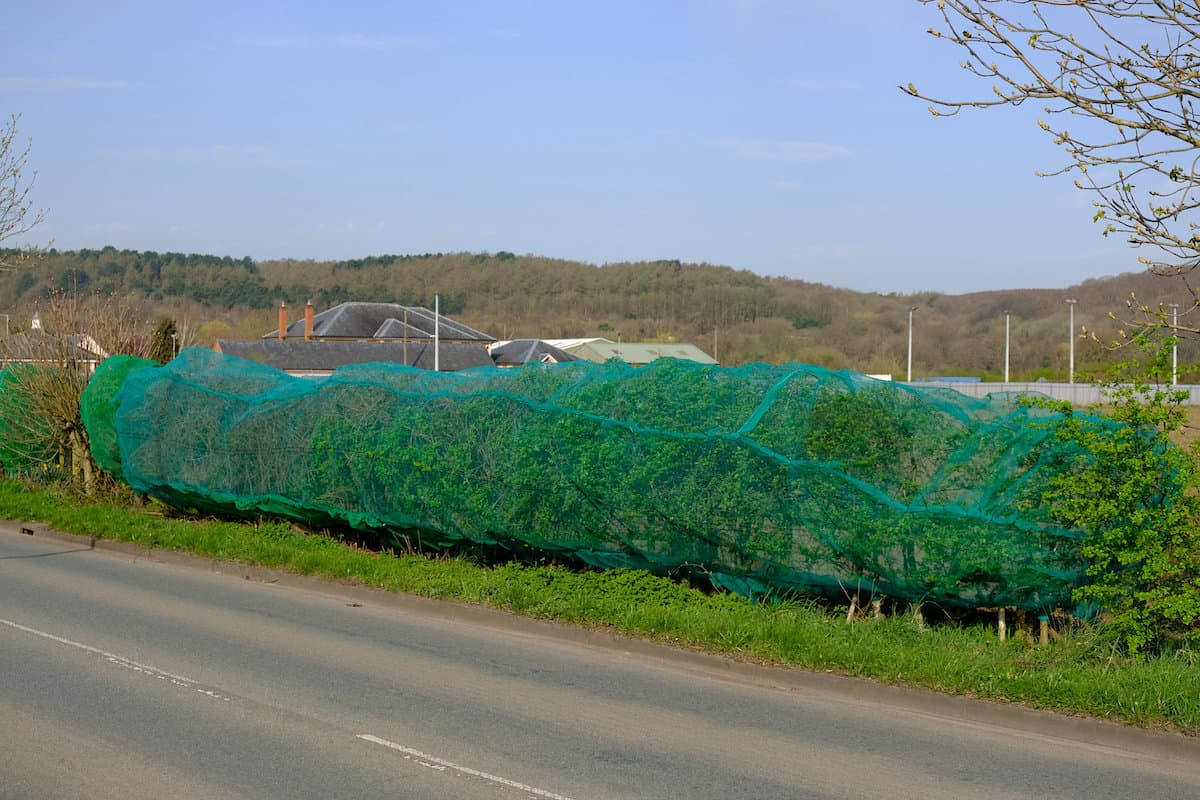 “The Royal Society for the Protection of Birds (RSPB) has criticised the move as well as local residents who have branded the practice “cruel” and unnecessary”.

Housing developers have been blasted by conservationists for setting “death traps” for wildlife after wrapping bushes in plastic NETS to stop birds from nesting.

The large green plastic netting has appeared near the site of a new housing estate being built along Cotton Lane, in Tamworth, Staffs.

Maplevale Developments have gained planning permission to build 141 brand new houses on the land and have placed the netting where the entrance street will be.

Under the Wildlife and Countryside Act 1981 it is against the law for trees containing nesting birds to be disturbed or cut down.

So housing developers sometimes erect the meshing in Spring as a way to avoid delays to work taking place, which is legal to do.

But the Royal Society for the Protection of Birds (RSPB) has criticised the move as well as local residents who have branded the practice “cruel” and unnecessary”.

The controversial nets have also previously been condemned by BBC wildlife expert Chris Packham who described the tactic as “outrageous” and “brutal ignorance”.

A RSPB spokesperson said: “We cannot keep trying to squeeze nature into smaller and smaller spaces or demanding it fits in with our plans.

“This is an issue we are talking to the Government about as they look at what needs to happen over the next 25 years to stop our wildlife from continuing to vanish at an alarming rate.

“In the UK we have lost over 40 million birds in the last 50 years.

“So we are looking to the Government to not just ask planners and developers to think about whether it is necessary to remove the trees and hedgerows that are vital for supporting our wildlife, but to ensure that developers replace what they take away.

“If the work is absolutely necessary, then the use of netting could be avoided by tree and hedge removal being completed outside of nesting season.

“And, if it is used it is important to remember there are legal responsibilities to do it properly.

“This means checking for birds and other animals when the netting is fitted, and then ongoing regular checks, as wildlife often finds a way to get under the edge of a net and then get stuck.

“And, this should be backed up by a commitment to plant new trees and hedges as no one wants to live in a neighbourhood where the sights and sounds of nature have been driven out.

“While the practice of netting is legal, the RSPB would like planners and housing developers to take some important points into consideration.

We are also sending more detailed, technical guidance to all housebuilders so they can follow this best practice and contact us for any advice.”

Residents living nearby also expressed their anger at developers for erecting rows of “unsightly” green nets around the bushes marking the perimeter of the site.

Dad-of-two Arthur McKeown, 44, said: “I just think it is cruel to deprive birds of their natural habitat, when they are erected badly they can trap birds and kill them.

“But on top of that they are garish and unsightly, and I believe they are completely unnecessary. All this to save some businessmen a few quid.”

So we can then take the hedges out in the coming months without disturbing any wildlife. We’re very keen that we don’t want to cause any disturbance in the area. We are extremely responsible and whilst it has caused some queries we have fully complied and it’s what every other developer does in the country.

We are a responsible developer and fully understand our obligations to protect nesting birds. We will continue to regularly check the nets throughout the nesting season to ensure compliance. We have kept the local planning authority informed over the timing of the netting and its location throughout.”

This article was first published by The London Economic on 31 March 2021. Lead Image: Credit: SWNS.