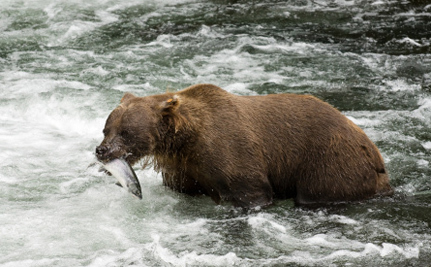 You already know that it makes much better sense environmentally to watch bears than to shoot them. Now it turns out that it also makes better sense from an economic standpoint: there is much more money to be made in looking at bears than there is in hunting them.

Visitors are flocking to the Great Bear Rain Forest in British Columbia, Canada, just to see the bears. That’s great news, especially because a study conducted by the Centre for Responsible Tourism, a research institute at Stanford University in Washington, D.C., and funded by the conservation organization Tides Canada, concluded that bear-related ecotourism is exponentially more profitable than trophy hunting.

“We found that the bear viewing is generating 12 times more in visitor spending than is bear hunting, and over 11 times more in direct revenue for the B.C. province,” said lead researcher Martha Honey.

Ecotourism, including bear viewing, has grown rapidly over the past decade on B.C.’s Central Coast, said Honey. People from around the world come to the Great Bear Rainforest in the hopes of seeing black, grizzly and kermode bears in their natural habitat.

Here’s how the World Conservation Union defines it: “Environmentally responsible travel to natural areas, in order to enjoy and appreciate nature (and accompanying cultural features, both past and present) that promote conservation, have a low visitor impact and provide for beneficially active socio-economic involvement of local peoples.”

Most tourism in natural areas today is not ecotourism and is not, therefore, sustainable. Ecotourism is distinguished by its emphasis on conservation, education, traveler responsibility and active community participation. Specifically, ecotourism possesses the following characteristics:

•    Conscientious, low-impact visitor behavior
•    Sensitivity towards, and appreciation of, local cultures and biodiversity
•    Support for local conservation efforts
•    Sustainable benefits to local communities
•    Local participation in decision-making
•    Educational components for both the traveler and local communities

While the report from British Columbia concluded that ecotourism was on the rise, it also found that trophy hunting is on the decline.

The Centre for Responsible Tourism is calling on the government of British Columbia to reconsider its hunting policies in light of these findings.

Here’s one of the Centre’s very cool findings: researchers discovered that companies involved in bear viewing employed 510 people in 2012, while 11 people worked for guide outfitters in the same year. Enough said!

However, a Ministry of Forests spokesperson said the ministry is disappointed in the report, claiming the study creates an artificial divide between bear viewing and hunting, which are not necessarily mutually exclusive activities.

Oh yes, they are.

Bear viewing implies a respect for nature and an acceptance that we are all part of nature together; bear hunting implies that humans have the right to take dominion over nature and destroy wantonly whenever they see fit.

It is this attitude that has allowed mountain tops to be destroyed, and entire species to be wiped out, amongst other atrocities.

By contrast, President Richard Nixon declared in 1973, when signing the Endangered Species Act into law:

Nothing is more priceless and more worthy of preservation than the rich array of animal life with which our country has been blessed. It is a many-faceted treasure, of value to scholars, scientists and nature lovers alike, and it forms a vital part of the heritage we all share as Americans.

This is the attitude we should endorse. Government of British Columbia, are you listening? Why not go for saving the economy and the environment at the same time?

This article was written by Judy Molland for Care2.com