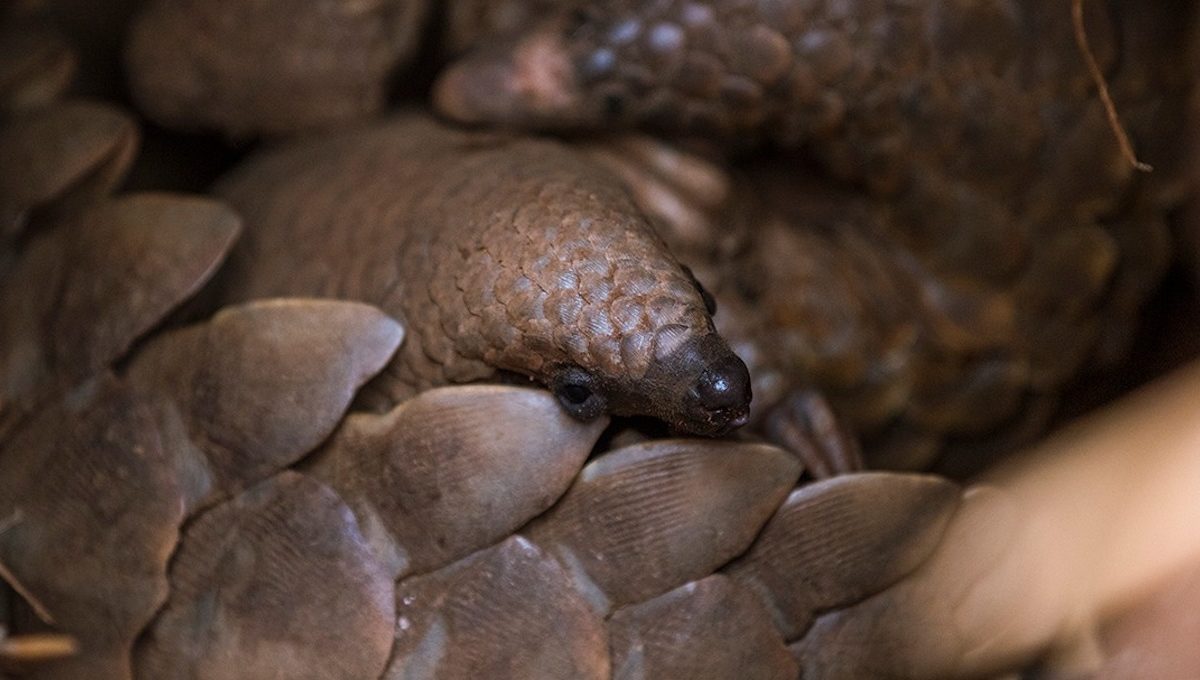 Ally arrived at the veterinary hospital the way most rescued pangolins do: underweight, dehydrated and suffering from pneumonia. But a routine ultrasound revealed that Ally wasn’t a typical patient — she was also pregnant.

In April, officials working for the South African Police Service’s Endangered Species Unit managed to rescue Ally, a wild Temminck’s pangolin (Smutsia temminckii), from people attempting to traffic her for her body parts. Pangolins will not eat or drink while in captivity due to extreme stress, says Ray Jansen, chairman of the African Pangolin Working Group (APWG), so her health had quickly deteriorated while in the hands of the traffickers.

“You’ve got this incredibly innocent animal with no natural predators being exposed to loud music, smoke, alcohol, taxis,” Jansen told Mongabay. “It’s just absolutely horrific. I’ve got videos of them being picked up by their scales, being hit with … machetes, being kicked around, thrown around. They’re severely abused. So you’ve got to deal with that mental trauma, as well as the … illnesses they pick up in the trade, and the starvation and the dehydration.”

The eight species of pangolins are considered to be the most commonly trafficked animals in the wildlife trade. They are mainly traded for their scales, which continue to be a key ingredient in some Chinese traditional medicines, even after China enacted a ban on pangolin scales in June. Pangolin meat is also considered to be a delicacy in many countries, which is another factor driving the trade.

Karin Lourens, a veterinarian at the Johannesburg Wildlife Veterinary Hospital, said it was essential that Ally didn’t experience undue stress while being rehabilitated so she didn’t miscarry. However, any captive situation, including a rehabilitation program, could prove stressful for a wild pangolin, so the vet staff had to treat her very carefully.

“[I]t is a very fine line between making sure the mother is healthy enough to release and not keep[ing] her too long,” she told Mongabay in an email.

Very little is actually known about pangolin reproduction biology, so the veterinary staff couldn’t determine the age of the fetus, or when Ally might give birth. But they worked hard to help Ally get better so she could be inducted into APWG’s release program, which has been introducing Temminck’s pangolins into South Africa’s KwaZulu-Natal province, where the species has been “ecologically extinct” for the past 30 or 40 years. The team is also releasing pangolins in the Limpopo and Mpumalanga provinces. It would be much better for Ally and her pup, they realized, if the birth happened in the wild.

As soon as Ally had gotten over her illness and gained enough weight, the APWG team transported her to a release site in the Limpopo Valley on the northern border of South Africa. Like all pangolins in the APWG program, Ally’s release was gradual and closely observed. During the initial stage, caretakers accompanied Ally as she explored and foraged for food, then moved her back to a safe, enclosed space each night. At first, Ally tried to flee the area, which indicated that she was stressed. But on the other hand, the caretakers saw that she was eating well and maintaining a steady body weight.

The team decided to move Ally to another location, and this proved to be a good decision: she was much more relaxed in the new place. Not long after settling into the new place, the team fully released her, but kept close tabs on her via her radio and satellite transmitters, and camera traps outside of her favorite burrows. They only physically checked up on Ally when absolutely necessary.

In August, a camera trap showed that Ally was no longer alone — she’d given birth to a tiny, healthy pup. This is the first time a Temminck’s pangolin rescued from the wildlife trade has ever done this, according to Jansen.

“What makes this very special is that she gave birth as a wild and free pangolin,” Jansen told Mongabay in an email. “She has bonded with the pup and both are doing very well. Usually, when pangolins give birth in the trade or in captivity, even when they are in the hospital, they abandon the pup.

This is the first account I have heard of where a pregnant Temminck’s pangolin has been retrieved from the trade, hospitalised, rehabilitated and released and successfully given birth and bonded with her pup.”

A month later, Ally and her baby are still doing extremely well, according to both Jansen and Lourens.

“We have since seen the pup again and it is healthy and growing like a weed,” Lourens said. “We are all ecstatic!”

This article by Elizabeth Alberts was first published on Mongabay.com on 21 September 2020. Lead Image: A pup born to a pangolin that was rescued from the wildlife trade, and released in South Africa. Image by Francois Meyer.