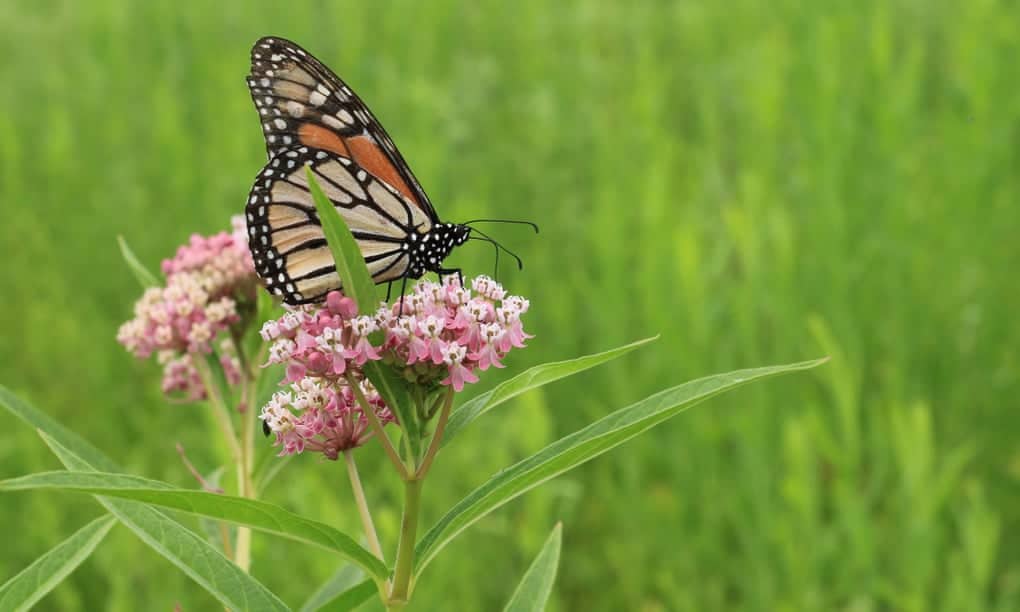 In one of the biggest mobilizations of resources and talent ever organized to save an insect, the state of California is teaming with conservation groups, biologists and scores of citizen scientists to rescue the western monarch butterfly from the brink of extinction.

To do this, they are placing their hopes on an unassuming, poisonous plant called milkweed.

Monarch butterflies, known for their distinctive orange and black pattern, once flocked to California in the millions, spending the winter clumped on trees as they migrated to and from the state’s central coast.

But the population has sharply declined from 4.5 million in the 1980s, dropping to nearly 200,000 in recent decades before taking a precipitous dive in 2018. That year, the population fell to nearly 30,000, and when volunteers counted again in November, it had dropped to fewer than 2,000 – representing a 99% collapse in the last three decades.

“It was really grim,” says Angela Laws, an endangered species conservation biologist with the Xerces Society, which conducts the November population counts using an army of volunteer naturalists.

“It’s alarming that the numbers are so low. But we still have time to save these butterflies.”

Horrified conservationists are scrambling to plant 30,000 of the native milkweed plants, which are crucial to the butterflies’ life cycle, providing food for monarch larvae and adding the touch of poison that makes monarch colors so bright. Monarch caterpillars are entirely dependent on milkweed for two weeks of their life cycle, munching through about 30 leaves before they transform into jade green chrysalises to eventually emerge as butterflies.

“Collectively, it’s a lot of great brains trying to figure out what, if anything, we can do,” said biologist Hillary Sardiñas, who serves as pollinator coordinator for the California department of fish and wildlife. “Monarchs are incredibly iconic. It would be horrible to lose these incredible butterflies that have captured people’s imagination for hundreds of years.”

The state is providing $1.3m for the restoration group River Partners to restore 595 acres (240 hectares) of monarch habitat along rivers and streams in California – while biologists enlist the help of gardeners, nurseries and backyard scientists to do their own plantings and help catalog monarch sightings.

While it is not completely known why the monarch population has collapsed so suddenly, scientists have speculated that the species might be suffering a “death by a thousand cuts”, said Sardiñas.

Over recent decades, there have been thousands of acres of lost wildland habitat, both in their wintering habitats in such famous butterfly sites as Pacifica and Pismo Beach, and in the agricultural Central Valley of California, through which migrating butterflies must pass in their spring and fall migrations.

Increased use of herbicides has also reduced the amount of milkweed available for monarchs to lay their eggs. The emerging caterpillars feast on the poisonous milkweed, which is what gives them their bright colors of adulthood and makes them poisonous to predators.

In addition, insecticides used in agriculture may be harmful to the monarchs themselves in ways scientists are still struggling to understand. A 2020 study by the Xerces Society and the University of Nevada, Reno, studied various samples of milkweed from around the central valley and found an average of nine different pesticides on each plant.

The species may also be facing threats from global heating. Scientists have found they are emerging from their wintering sites earlier in the spring. Yet the milkweed they need to survive their migrations may not be blooming yet. The vast fires and unusual freezes that have accompanied the climate crisis may also be affecting their life cycles.

“It’s really difficult to pinpoint exactly what is the one thing affecting them most,” said Claire Pavelka, a biologist who is working on the project for the non-profit River Partners. She noted that the problems faced by the monarchs could also be harming other insect species important to human survival.

“They’ve been likened to a canary in a coalmine,” she said. “Monarchs are so well studied; they’re really charismatic and really well known. But the fact that they’re declining so fast is probably an indicator that a lot of other pollinators, and bees and other butterflies are also declining.”

But Cheryl Schultz, a professor of biology at Washington State University who will be studying the effects of California’s habitat restoration to understand how well the techniques work and how they might be improved to save more monarchs, said butterfly populations are amazingly “bouncy”, varying dramatically from year to year.

“Monarchs are incredibly resilient,” said Schultz, who has studied butterflies in many settings. “I have lots of hope that they can bounce back.”

So while River Partners are planting large sites with milkweed in the Central Valley, the organizers are encouraging everyone to plant milkweed and pollinator-friendly native flowers in their communities with guides offering tips on which varieties to plant. Citizen scientists, who want to help out, can help study the locations of milkweed and monarchs with the Western Monarch Milkweed Mapper or join the annual Thanksgiving count.

“People don’t always show a lot of sympathy for insects,” said Laws. “But everybody loves monarchs. It’s great to see people rallying to save these animals.”