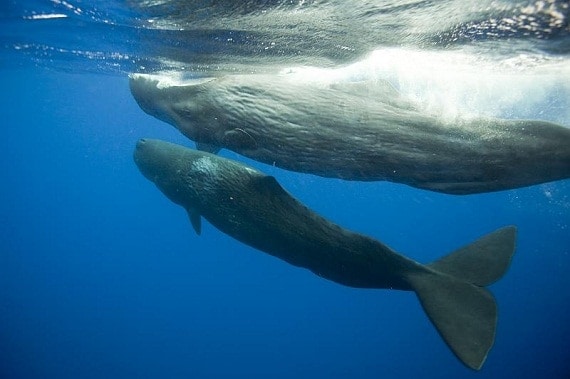 In June, researchers found that whale poo is highly beneficial to marine ecosystems in the Southern Ocean since it is rich in iron. Now, new findings show that whales’ contribution to the sea goes far beyond just their excrements.

In a paper released earlier this month, University of Vermont conservation biologist Joe Roman and a team of other biologists found that baleen and sperm whales—referred to as great whales—are what Roman calls the “ocean’s ecosystem engineers.” The study revealed that whales have a positive effect on the oceans from global carbon storage to the overall health of commercial fisheries—contrary to some claims that whales provide competition for fishermen.

The scientists found they play a large role in ocean functionality, particularly when it comes to the food chain: Great whales eat a wide variety of fish and invertebrates, act as prey to other predators like killer whales, and distribute nutrients throughout the water. And, long after they’ve died, these whales even continue to benefit ecosystems as their carcasses provide food and habitat to an abundance of marine creatures, many of which rely exclusively on the carcasses to survive. The large carcasses also store a significant amount of carbon in the deep sea.

For centuries, whale populations have been devastated by overhunting, bycatch, vessel strikes, and pollution—and it’s estimated that great whales have declined by at least 66 percent, but possibly by as much as and perhaps as high as 90 percent. In the study, Roman and his colleagues write that the decline in great whale numbers in particular have likely altered the function of the oceans, but recovery is possible and in some cases already beginning.

“The continued recovery of great whales may help to buffer marine ecosystems from destabilizing stresses,” Roman wrote in the press release. “As long-lived species, they enhance the predictability and stability of marine ecosystems.”

The paper is a compilation of research made by Roman and his team over several decades on whales from all over the world. Using technology like radio tagging, the biologists were able to directly observe and study the roles of whales—something that wasn’t fully possible without these new resources.

Oceana fights to protect whales through a number of campaigns, like reducing whale bycatch, combatting overfishing, and most recently, working to stop seismic airgun testing, whose loud blasts could injure, kill, or deafen whales and other marine mammals.

This article was written by Madeleine Simon for Oceana.org