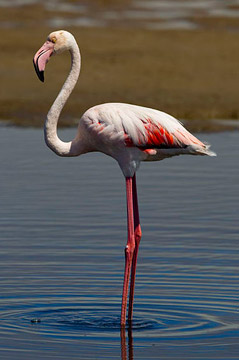 When you think of flamingos you think of the great flamingo migration, a sea of pink in Tanzania, or maybe even a funny cartoon with these dancing, lanky creatures but the last thing you would think of is Mumbai. Strangely, this modern chaotic city provides a temporary home to these lovely coral-colored birds. They visit the mudflats of Mumbai every year in the winter (January – May) and provide a treat to casual bird-watchers, ornithologists and regular citizens alike. The Bombay Natural History Society (BNHS) also organizes a flamingo watching festival during this period to encourage people to observe these birds.

The Sewri jetty is said to be the prime spot for flamingo watching, as well as many other specices of birds that are attracted to the mudflats. But according to the BNHS, this annual treat may soon be a thing of the past. Dumping of garbage, urban development and destruction of mangroves could damage the habitat completely. This year, an estimated 10,000 flamingos flew into the city. Every year this number varies between 8,000 to 11,000 but unchecked dumping of garbage along stretches of mangroves in the city has bird lovers concerned.

Both lesser and greater flamingos flock to Sewri, Thane creek, Mulund, Bhandup, and the stretch from Airoli to Vasai. According to BNHS, the Sewri jetty is the largest flamingo habitat in the city running for 10 km and about three kilometres wide. The next largest is the Thane creek. These sites are notified among the important bird areas (IBA) worldwide.

“But the biggest threat to Sewri comes from the proposed Nhava Sheva sea link, which will run straight through the mudflats. This will destroy the mudflats where flamingos and many other migratory birds feed,” said Dr Asad R Rahmani, director, BNHS.

However if this sea link is moved by a few metres, this jetty could be saved and flamingos will continue to grace the city with their presence.

This article was written by Akhila Vijayaraghavan and published by Mongabay.com

I am a resident of Mumbai and a frequent visitor to the mudflats at Sewree (a suburb of Mumbai) where these flamingos can be seen till the monsoon starts.It is said that some of them are resident birds and some of them migrate to Mumbai from the adjoining state of Gujarat.Some of the snaps of these lovely birds and some other birds at this locality can be seen here on this link.