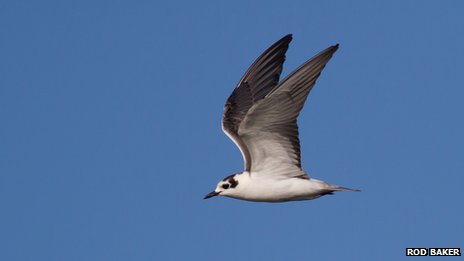 A rare bird usually found in Central Asia and Africa has been discovered at a nature reserve in Nottinghamshire. The white-winged black tern has attracted more than 800 birdwatchers to Attenborough since it was first spotted on Thursday.

Experts said the bird could have been blown off its migration course as it would normally spend winter in the southern hemisphere.

Mr Sexton said: “It first appeared on Thursday but news didn’t get to us until late so it was too dark to go out looking for it.

“An anxious night followed and at first light on Friday I arrived at the reserve and within minutes, had relocated the white-winged black tern.

“It’s so rare in the UK because it breeds in the far east of Europe, Central Asia and East Africa.

“It over-winters in southern Africa, South Asia and as far away as Australia.”

The tern normally breeds in marshes and areas of wet grassland, and it is thought this is why the bird has settled at Attenborough’s network of ponds and lagoons.

The birds picks up food like insects and small fish from the surface of the water, rather than diving for fish like common terns.

Mr Sexton said: “Seeing the bird was a life tick, and on my own patch.”

The arrival of the bird was the highlight of a weekend which also saw sightings of a rare marsh harrier, an osprey and a great white egret.

This article was written and published by BBC News Nottingham.