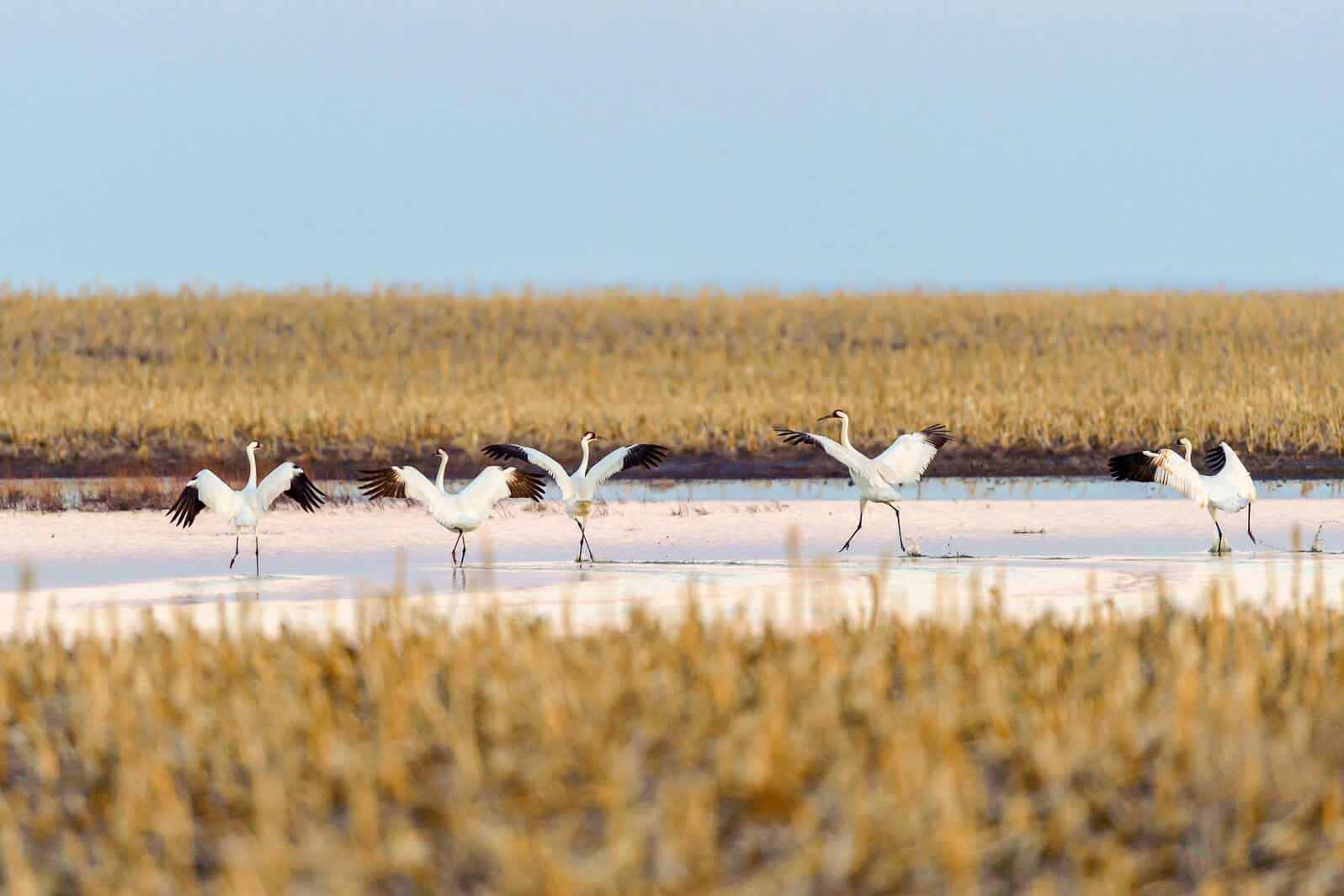 Standing five feet tall and with a wingspan of nearly eight feet, the charismatic Whooping Crane is the tallest bird in North America. It also looms large as a conservation symbol. More than 800 Whooping Cranes survive in North America today—a monumental increase from a low of 16 in the 1940’s, when the population plummeted thanks to the one-two punch of over hunting and destruction of wetland habitat. Of those 800 birds, the wild descendants of the original population comprise some 500 individuals which migrate each year along the same ancient pathway their ancestors once did through the Great Plains of North America. They spend the winter in southern Texas near Corpus Christi and then fly north to breed in northern Alberta, Canada.

In winter as well as during the summer breeding season, cranes are fiercely territorial, spending their time in mated pairs or in small family units and shrieking at other cranes that venture too near. But during migration they congregate in larger groups as they stop to rest and forage in wetlands along their route. Spotting 10 or 20 Whooping Cranes at a time would have been remarkable as recently as the 1990’s. “Up until 2000, there were very few groups recorded over 10 birds, and zero over 30,” says Andrew Caven, director of conservation research at the Platte River Whooping Crane Maintenance Trust. “In recent years, we’ve recorded a much higher frequency.” Indeed, birdwatchers and biologists have witnessed groups of more than 70 individuals gathering in Kansas wetlands. A flock of 151 cranes was observed in 2018 in a single agricultural field in Saskatchewan, representing nearly a third of the wild, migratory population.

This might sound like a positive: The population is recovering, and so Whooping Cranes now gather in larger flocks. There’s just one problem: When so many animals are clustered in just a few locations, a single mass mortality event—disease or a terrific storm—could impact the entire population. For an endangered species, that could make the difference between continued recovery and a return to the precipice of extinction.

To find out why the birds seemed to be gathering in such large groups, Caven and his team turned to a database of public crane sightings managed since 1942 by the U.S. Fish and Wildlife Service, giving them 77 years’ worth of records. They discovered that the frequency of large groups—defined as flocks of seven or more Whooping Cranes—increased at a faster rate than the growth of the population overall. That suggested to him that something else was rousing the endangered birds to assemble. The findings were published April 2 in the journal Heliyon.

When Caven looked at where exactly these larger flocks tend to gather, he often found them in well-protected wetlands in regions where good crane habitat is otherwise hard to find. “We saw a higher frequency of large groups in high-quality wetlands within landscapes that were relatively depauperate of wetland habitat,” he says. This pattern was particularly strong in the southern Great Plains, which stretches south of the Platte River from southern Nebraska through Texas. Starting in the 1950’s, many of the wetlands in this region were drained and their fertile soil was converted to farmland. Now, only a few healthy wetlands remain, like Salt Plains National Wildlife Refuge in Oklahoma and Quivira National Wildlife Refuge in Kansas. All the birds have no choice but to gather together in those few sites.

Even in areas with relatively more wetlands available, though, the birds still clumped into larger groups than Caven would have expected. He attributes this pattern to the cranes’ social instincts. “These birds are likely using each other as an indicator of habitat quality, as well as potentially for group vigilance,”he says.

A mass mortality event within a flock of 70 Whooping Cranes would instantly wipe out a large proportion of the species.

From one perspective, these trends reflect a rare conservation win in a world facing an increase in extinctions and a decrease in expanses of healthy and well-connected wildlife habitat. “The downside is that in some of these isolated wetlands, there’s occasionally outbreaks of things like avian cholera,” Caven says. In 2018, some 50,000 Eared Grebes were lost to avian cholera in Utah; meanwhile, 2,000 snow geese died in Idaho from the same illness. The year before, also in Idaho, 4,200 ducks and geese were felled by the bacterium.

The infectious disease is just one of several that can result in the deaths of tens of thousands of waterfowl when they congregate in close quarters. Add extreme weather events like hail or ice storms, which can also wipe out thousands of birds at once, says Caven, and the list of potential threats grows longer, even while any one of them remains fairly rare. A mass mortality event within a flock of 70 Whooping Cranes would instantly wipe out a large proportion of the species along with its genetic diversity, undoing decades of hard-won conservation success, says Caven. “Even something happening to 20 Whooping Cranes would be a loss of really valuable genetic material.”

“There’s always reason to be concerned if part of the time they’re occurring in groups that could suffer some catastrophic event,” says Virginia Tech biologist Kate Langwig, who studies the transmission of white-nose syndrome in bats and was not involved in this study. The fungal disease, which has killed millions of bats in North America, has been known to kill up to 90 percent of bats within a single cave. “We’re seeing in history now [with the spread of the SARS-CoV-2 virus] why we have to sometimes be concerned about one-off events,” she says.

The best way to mitigate this problem is a practice all too familiar to people living through the coronavirus pandemic: social distancing. There’s no way of coaxing wild birds into staying put in small groups, of course. But restoring wetland habitat throughout the migration pathway could achieve the same goals. If Whooping Cranes had more high-quality habitats to choose from, the birds could spread themselves out over a broader area, reducing the chances that a quarter or a third of the entire population could succumb to a pathogen or a storm in one fell swoop.

If the drive to protect endangered Whooping Cranes can stimulate more wetland restoration, they can serve as an umbrella for all the other species that rely on those habitats, too. “If we can help Whooping Cranes and we can do what we need to do for wetlands, we will help so many other things: boreal chorus frogs, tiger salamanders, innumerable aquatic insects and plants,”Caven says. But for him, the impetus is far simpler. “These 500 white birds traversing Texas to northern Alberta every year, I think they’re more for our spirit than anything. I think people feel better knowing that there are still wild things in a human dominated world.”

This article was first published by Audubon on 2 April 2020.