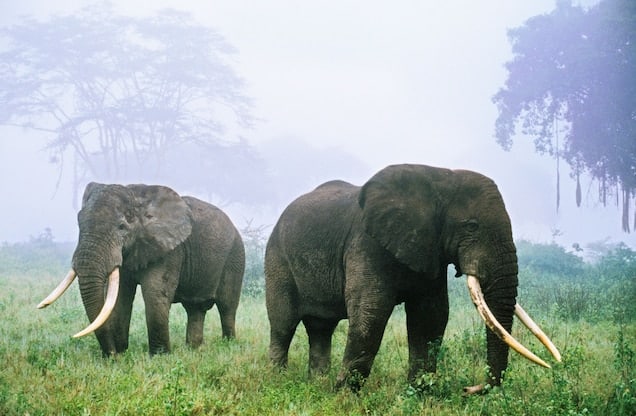 Tanzania’s elephant population has plummeted by more than 60 percent during the past five years, the country’s government announced this month.

Tanzania’s Minister of Natural Resources and Tourism, Lazaro Nyalandu, says the drastic decline might be because elephants had migrated into neighboring countries. The ministry, he said recently, is trying “to find out what happened to these elephants.”

Mary Rice, Executive Director of the Environmental Investigation Agency, an environmental watchdog group, says that response suggests that Tanzania is still not serious about tackling the real root of its elephant crisis: corruption and official collusion with Chinese-led transnational criminal gangs, according to EIA. (Tanzania’s Foreign Minister has denied that government officials are involved in ivory smuggling.)

Rice leads EIA’s elephant campaign, which has been investigating the flow of illegal ivory from Africa to China and other countries, mainly in Asia, for the last decade.

Speaking from her office in London, she says the Tanzanian government has long ignored actionable information about ivory smugglers.

What’s your reaction to the announcement that Tanzania’s elephants are being killed at such an astounding rate?

It’s a dramatic decline of the population. And it indicates a major problem that may be ongoing—we don’t know, because this count was done last year.

But, you know, it’s not a surprise to anyone who’s been looking at and investigating and documenting what’s been going on in Tanzania over the past decade. There have been repeated reports and exposés from international NGOs and journalists, but also from within Tanzania. Tanzanian journalists raised the alarm in 2009.

So it’s not a new story.

The Ministry of Natural Resources and Tourism says that it’s planning to “launch an extensive operation” into what happened to 12,000 “missing” elephants. What’s your reaction to that?

This [2014 aerial elephant] census report was in government hands at the end of last year. We’re now in June. If they’re going to do an investigation, why have they not done the investigation already?

I don’t think saying that those animals have migrated is a sensible response. Obviously, there are animals that do migrate across borders, but not to this degree.

It’s fair to say that the government know they have a major problem. They’re focusing massive effort on the ground , but it’s not stopping it.

If the best efforts by Tanzania’s wildlife rangers are failing, why is that?

Because the main activity of moving ivory and shipping it out and trafficking it happens in an entirely different space outside of the wildlife areas.

The transportation of the goods along the roads, the stashing of goods in safe houses, the people involved in pulling together containers and getting false documents and paying corrupt officials, police, customs, border people to facilitate this—that’s not where the enforcement effort is happening. And that’s where it needs to happen.

Is part of the problem that it’s hard to get evidence against people who are higher up in the chain of ivory trafficking?

I don’t think so. The failure is largely about following the process through. We first identified problems to the authorities back in 2007. We provided them with intelligence and information about specific individuals operating and where they operated and the sorts of things they were engaged in.

We met with the then-minister of the environment and gave him video footage we had of the people involved—what they were saying and who they were implicating—people involved all the way along the trade chain.

Individuals working in shipping, for example, as well as people, including senior individuals, working within the Wildlife Department.

The minister was clearly very unnerved by it. He asked us what we planned to do with the information.

We said, “Well, that very much depends on what you do.”

The upshot was that [Tanzania’s] proposal to down-list their elephants [to a less-protected status] was withdrawn. And we didn’t release the information into the public domain because we thought, well, okay, if they have an opportunity to put their house in order, that will be a positive result.

So we revisited, and this time we released the information we had at the CITES meeting in March 2010.

Just to clarify, CITES is an agreement among governments around the world to regulate trade in imperiled species.

We did provide confidential briefing documents to the enforcement authorities in the countries involved, which were Tanzania and Zambia, but also to the CITES Secretariat.

And again, we waited to see if anything would happen.

By the time we got past the CITES meeting in 2013, it was clear there was very little positive impact on anything that Tanzania said it was doing, despite all its commitments, and despite all the money that’s been thrown at Tanzania to assist it in tackling this problem.

So we decided that we needed to put the situation in Tanzania in context, which is why we did [2014’s] “Vanishing Point” report, which covers a decade, effectively, of systematic failure, corruption, and abuse.

They’re not operating in isolation. They’re working with locals. The only way that they can work successfully in the manner that they do is with the collusion of local people.

All the way through the chain. From the taxi drivers to the officials, people in customs, in the airports, in the freight companies, in the shipping companies. And then out in the bush, where people transport goods, where people hide goods and stash goods.

Every single step of the chain is facilitated by Tanzanians. So, it’s not an isolated Chinese venture. It’s a joint venture. But the people who are up front and at the most risk of being caught are the locals.

Can you tell us a bit about how EIA investigations work?

It isn’t like the movies, let’s put it that way. The films make it all seem very sexy and glamorous with all these gadgets and wonderful travel and all the rest of it, but it’s not like that at all. It’s a lot of hard work, often staying in really awful places, away from your family for weeks and weeks on end.

It’s been six months since the “Vanishing Point” report came out. Has the Tanzanian government responded in any meaningful way?

No, it hasn’t responded publicly in any meaningful way.

There are really good people on the ground sweating blood to try and stop this, good people with real soul and concern about what’s happening to their resources. But they’re being undermined by a system that repeatedly fails them.

Not really, no. It’s predictable. It’s the way these things work sometimes.

It’s a bit like the FIFA thing… it’s one of those situations where everybody has known that there has been corruption and who the people are. But we haven’t been able to actually nail those people.

So, [the FIFA scandal] fills me with hope that eventually the right thing can happen.

This article was first published by National Geographic on 12 Jun 2015. Lead Image: A new report shows that poaching has reduced Tanzania’s elephant numbers by 60 percent during the past five years, from almost 110,000 to just over 43,000. Photograph by Frans Lanting, National Geographic Creative.