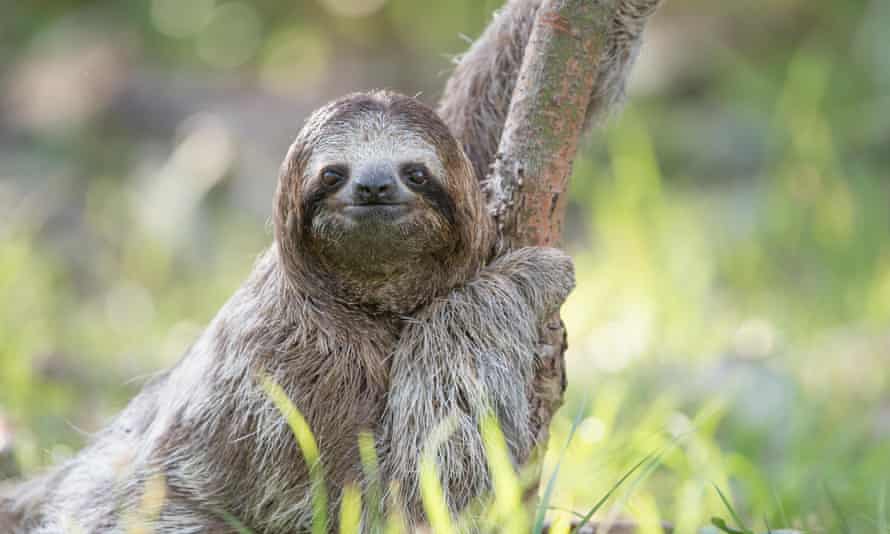 Nobody seems to know quite how the sloth became the rock star of the animal kingdom. From high in the Latin American rainforest, the absurd mammal is the focus of a frenzied obsession that shows no sign of abating. Sloths are on bank notes, adverts, T-shirts, internet memes and Instagram fan pages.

“People are obsessed,” says Costa Rica’s president, Carlos Alvarado Quesada, when asked why people have fallen in love with the creature. “The sloth is quite a unique animal. It’s also very related to the forest. I believe it’s the elegance of the movement.”

But as with many examples of anthropomorphised wildlife, the trappings of fame have started to cause problems for the humble sloth. They are among the most “selfied” animals on the planet, according to wildlife charity World Animal Protection. An analysis of Instagram images by the organisation found that 70% of selfies with sloths– from the Brazilian Amazon to Central America – involve hugging, holding or using them as props.

The stress of constant handling and noise for a creature that spends most of the day asleep in the wild can have damaging consequences.

“If people are just seeing their images but not really thinking of them as wild creatures, then it could do more harm than good because it’s feeding the frenzy,” says Sam Trull, who runs the Sloth Institute, an organisation that rehabilitates the animals and reintroduces them into the wild in Manuel Antonio, on the Pacific coast of Costa Rica.

The brown-throated three-toed sloths and Hoffmann’s two-toed sloths that hang from the rainforest in Manuel Antonio are a reassuring part of life in the national park area. The sight of a grey ball of fur clutching a cecropia tree lifts the darkest of moods. Yet the urge to climb into the canopy and give the dozing mammal a cuddle has gone too far. Adoring tourists have become a threat.

“The photo-prop trade is a really big problem, where people take sloths out of the forest and charge money for people to hold them and take pictures with them. That’s the negative side of them being popular. Anything that increases their popularity in a shallow way could be dangerous,” Trull says during a virtual tour of the sanctuary, where sloths are recovering from car accidents, dog attacks and exhaustion from the heat of the dry season.

In response to the problem, the Costa Rican government has launched the#stopanimalselfiescampaign to crack down on the practice. Although human and wildlife interaction has been illegal in the country for more than a decade, the 2017 World Animal Protection report said Costa Rica ranked seventh in the world for “cruel” animal selfies.

“These interactions don’t just put wild animals at risk, they put tourists at risk too. Animals can transmit zoonotic illnesses through biting and scratching,” says Shirley Ramírez Carvajal, a wildlife biologist who works on the campaign.

The problem with wildlife selfies is not limited to sloths. Instagram has also been alert to the issue and has introduced warnings about the abuse of wild animals on popular hashtags such as #koalaselfie, #elephantride and #monkeyselfie, which are often filled with beaming images of tourists and wildlife.

“We have a law that bans direct contact with fauna and feeding wildlife. In this way, animals maintain wild behaviour in the best possible way. Almost always, when animals get used to being fed or become comfortable around humans, there are accidents which can be quite serious,” Ramírez Carvajal adds.

Alongside the eight-point code on ethical wildlife selfies, the Costa Rican government is encouraging tourists to report illegal behaviour. The consumption of food meant for humans by monkeys and racoons in some national parks has caused issues with tooth decay, obesity and bone problems. It is hoped the campaign will raise awareness and reduce the number of such interactions.

Once Covid-19 travel restrictions are lifted, thousands of tourists are expected once again to travel to Costa Rica, many of them hoping to catch sight of a sloth clinging to a tree in the rainforest. It is an unlikely turnaround from the reaction of Spanish colonists, who dismissed them as ugly and useless.

“I think that they are a really good example of balance. Maybe this is one of the reasons why they are popular but this is also a reason why I think they should be popular with humans. A lot of people don’t have a lot of balance in their lives,” says Trull.

“Sloths are a really good example of how everyone should be living. I honestly think if more people were like sloths, we’d have world peace already. They are excellent role models for all of us.”