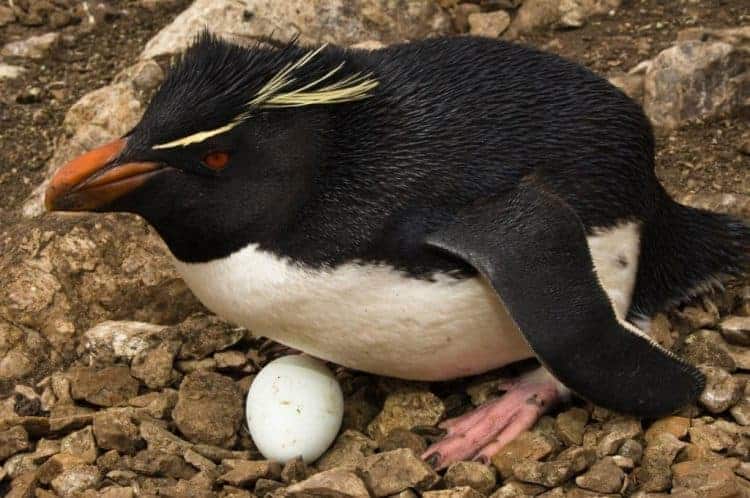 With their elaborate yellow eyebrows, crested penguins are both unmistakable and slightly clownish.

But to see the strangest part of these birds, such as the macaroni and rockhopper penguins, you shouldn’t look to their comical plumes. Instead, you need to watch what happens when they lay their eggs.

They produce two in any given breeding season. The first—let’s call it the A-egg—is always smaller than the second, or B-egg. It’s smaller by between 18 and 57 percent, a greater difference than in any other bird. Because it’s smaller, the A-egg is almost always doomed. The mother penguin might kick it out of her nest. She might refuse to incubate it. On the off-chance that both eggs hatch, only one of the two chicks ever survives to become a fledgling, and it’s invariably the larger B-chick.

Evolutionary biologists have been puzzling over this bizarre trend since the 1960s. Why is the A-egg so much smaller than the B-egg? And since it almost always dies, why would crested penguins bother producing it at all? Why not simply concentrate their efforts on a single egg, as the famous emperor and king penguins do?

“For many years, biologists have argued that there must be some adaptive basis,” says Glenn Crossin from Dalhousie University. Some thought that the A-egg is insurance, in case the B-egg is accidentally snatched by predators or accidentally damaged by squabbling males. Others believed that the A-egg might be an “OCCUPIED” sign that tells other penguins that a nest is full. “None of these explanations have stood up to experimentation, however,” says Crossin.

In 1990, Tony Williams from Simon Fraser University suggested a different idea. He noted that while most penguins spend the Antarctic winter close to ice, crested penguins head out into the wide open ocean. For six long months, they never come onto land. Instead, they swim quickly and continuously over two million square kilometers of frigid waters, searching for food on what has to be one of the longest foraging trips made by any animal. And it’s during these epic voyages that the females start ovulating, and making their A-eggs.

Specifically, they start making the yolk for their eggs while at sea. This process takes 16 days, and female macaroni penguins will lay their eggs just seven to 14 days after finally making landfall again. In 2010, Crossin and Williams showed that the female macaronis who reproduce most quickly once arriving—and thus spent the longest time making yolk while at sea—also had the greatest size difference between their A-eggs and B-eggs.

They reasoned that it’s hard for females to both make eggs and swim fast. Both are intense activities that burn a lot of energy. If females are forced to be speedy swimmers, they can’t properly invest in eggs. Hence, their first egg—started while swimming—is small.

Once they’re on land, crested penguins can fully devote their energies to egg-making, which is why the B-egg is bigger. By contrast, other penguins begin making eggs weeks or months after they return to land. It’s only the crested penguins that have that unfortunate overlap.

To test this idea, Crossin and Williams gathered data for all 16 species of penguins that lay two-egg clutches. They found that among the six crested penguins, the species that reproduce quickest after arriving back on land also laid eggs with the most extreme size differences. But among the other ten penguin species, there’s no connection between these traits. Again, this supports the idea that the crested penguins are stuck with laying a tiny first egg because they spend so long at sea. The longer each species stays out, the feebler its A-egg, the team reports in a Royal Society journal.

“One would think that after several million years of evolution, the [crested penguins] would have eliminated the first ovulation leading to the A-egg,” says Crossin. Perhaps they haven’t because it’s the path of least resistance. It’s simpler to just evict, neglect, or destroy the stunted egg than it is to alter their reproductive cycles and restructure the biology of their ovaries.

This article was first published by National Geographic on 04 Oct 2016.

I agree with Mike’s reasoning. We tend to think of each species as fully evolved, just as it is. But in fact each is still evolving, slower or faster, as conditions change. Perhaps there is still hope that we humans will evolve into a wiser, more self-controlled species instead of becoming an evolutionary dead end. Fingers crossed!

Maybe their behavior has been altered in the near past, and from the 60’s to 1990 is too short a period to notice that the A-egg is getting smaller and may someday be phased out.