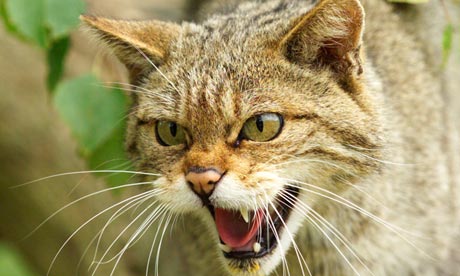 As Edinburgh Zoo’s panda freakshow continues to captivate the witless and the infantile, a real Scottish animal has been allowed to die. Under the noses of Scottish Natural Heritage, which likes to be known as the nation’s leading conservation body, the Scottish wildcat has all but been extinguished from the Highlands. The importance of this news may be deemed worthy of a mere footnote on the schedule of important issues with which Scotland is grappling but it ought to rank much higher. For the wildcat’s demise seems to be part of the neutering and emasculating of our wildest places. That which was previously held to be a quintessential part of what Scotland was originally meant to look like and smell like and sound like is now, it seems, unimportant.

Thus we allow golden eagles and our other great predators routinely to be executed by gamekeepers and farmers all over the Highlands. These wildlife crimes carry stiff penalties but no prosecutions are ever brought. After all, there are vast country estates to protect, mainly to ensure that Scotland remains the favourite country theme park of Europe’s aristocracy. And a decade after their filthy feeding methods gave the country foot and mouth disease, it seems we must trust that the farmers are right when they claim that their livestock is threatened by our most iconic birds.

And as an ancient species such as the wildcat is allowed to die, it seems, too, that 2013 will also mark the beginning of the end of the Gaelic. There are now fewer than 60,000 Gaelic speakers left in Scotland and, unless proper government financial intervention is forthcoming, the language will soon reach that point at which death becomes inevitable. All this, of course, doesn’t really matter if you remain indifferent to losing those natural treasures that make Scotland unique. Anything dangerous, wild, unkempt, ancient, jaggy and difficult to grasp thus becomes undesirable or of such a low priority in the drive to look and feel like everyone else that it is allowed to wither.

It’s nothing short of a national disgrace that the Scottish wildcat is probably now extinct. Conservationists have been receiving warnings about the mammal’s imminent decline for many years now. Last year, the entire conservation community was put on alert when it was revealed that only around 35 pure wildcats remained in the wild. Even then, the complacency and inertia that marked attempts to save the species was made apparent. Scottish Natural Heritage was still clinging to the hope that around 400 remained, even though it was known that this figure rested on unconfirmed sightings by passers-by. It was also known that earlier breeding programmes were probably contaminated by the genes of domestic breeds.

Scottish Natural Heritage, one of Scotland’s teeming community of heritage and cultural bodies, none of which is made to account regularly for their continued existence, had talked vaguely about an “action plan”. The Scottish Wildcat Association, along with other concerned bodies, has mapped out what any action plan ought to look like. Targeted wildlife management would enable wildcats to be trapped and then properly tested. The SWA has said: “If there are still pure wildcats left we need to create protected areas with proper management programmes to ensure feral cats in those areas are neutered to prevent further cross breeding.” Scottish Natural Heritage has estimated that any national wildcat conservation scheme would require around £2m over the next five years. Depressingly, it has also said that funding has yet to be finalised.

Thus Scotland’s skewed wildlife priorities are starkly exposed. For the want of a couple of million pounds, one of our most beautiful native species has been allowed to die. Meanwhile, we are spending £7m on a couple of inert and indolent black and white circus acts called Sunshine and Sweetie. These have been rented for 10 years from a regime that routinely murders its own people as a vanity project for a zoo that should have been shut down years ago.

I suppose, therefore, we should all be thankful that there appear to be advanced moves to reintroduce the lynx after a 700-year absence. This would be a grand move for this creature is also beautiful, ferocious and created by God to reside in the Highlands. The Lynx UK Trust is optimistic that SNH will permit a closely managed scheme.

Although, bearing in mind SNH’s lamentable performance in trying to protect the Scottish wildcat, perhaps we shouldn’t hold our breath. Any new lynxes roaming around the hills and glens might be in danger from over-zealous SNH officers in their belated attempts to save the wildcat.

Predictably, the National Farmers’ Union and the Scottish Gamekeepers Association have raised concerns about threats to their beloved coos and sheep, despite the fact that the lynx preys on roe deer, a species of which Scotland has such an abundance that it could meet the world’s venison needs. The Countryside Alliance also has worries, but these can be dismissed as coming from a body solely concerned in preserving the interests of the tiny minority who received their land windfalls through theft, murder and deception.

I’d like to see the return of wolves and bears to the Highlands too. These splendid animals were hunted to extinction several hundred years ago. And in an independent Scotland, I’d also be tempted to stick loads of them beside the big shooting estates so that they could prey on another of Scotland’s alien and pestilent species.

This article was written by Kevin McKenna for the Observer UK.