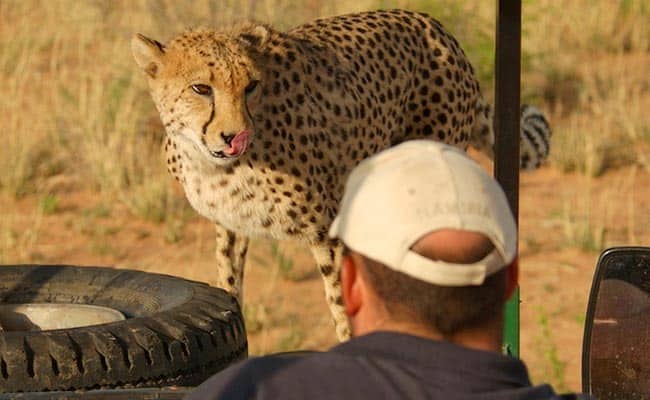 It’s estimated that just 7,100 cheetahs remain in the wild, thanks to years of habitat loss and poaching. Wildlife tourism can often help endangered animals flourish again, but new research suggests that may not be the case for heavily endangered cheetahs.

To make matters worse, they often find it difficult to thrive in captivity, meaning that if the wild population does dwindle further, there is no guarantee that breeding programs will be able to rescue the species. For this and several other reasons, cheetahs are listed as “Vulnerable” under the IUCN red list, with several of the sub-species classed as critically endangered.

Part of the way in which we have sought to help animals like the cheetah is to increase wildlife tourism. While some forms of animal tourism can lead to the horrific abuse of animals, strictly controlled safari-style tourism tends to be less invasive and sometimes even constructive.

Studies show that wildlife tourism can actually benefit many conservation efforts, because it makes the endangered animals into a resource that must be conserved for tourism to continue. As such, countries will invest in making sure endangered species are not poached and that their habitats are maintained precisely because they are financially viable business models or because they receive funds for these projects.

However, new research from the University of Oxford says that for cheetahs, wildlife tourism could actually be preventing cheetas from raising their young properly.

Studying cheetahs in Kenya’s Maasai Mara savanna during the 2013 to 2017 period, researchers observed that, if an area had a high amount of tourist traffic, cheetahs raised to independence an average of 0.2 cubs.

That’s an odd figure, but it’s important to repeat this is using averages with a high mortality rate. Compare this to low-tourism areas, where around 2.3 cubs survived to independence, and we see a significant difference.

So why is this? Well, one thing is for sure: it’s not tourists that are directly killing cheetah cubs. There were no observed incidents of such violence and no signs that this might be the case.

Furthermore, there was no evidence of cubs being accidentally run over because of tourist vehicles. That, in part, is down to cheetahs’ own natural wariness. There was no evidence that lion or hyena numbers, both of which are animals that prey on cheetah infants, might be affecting the cheetahs’ ability to thrive, either.

Dr Femke Broekhuis, lead researcher in this study, said that, on the contrary, something more passive might be occurring. “It is therefore possible that tourists have an indirect effect on cub survival by changing a cheetah’s behaviour, increasing a cheetah’s stress levels or by minimising food consumption.”

To illustrate this, the researchers note that at any one time there might be up to 30 vehicles around one family of cheetahs, all watching the animals.

Some animals appear to cope relatively well with this kind of activity. Lions do not seem to be affected in this way, and other large mammals, like elephants, have shown remarkable resilience, despite often being cruelly treated.

Broekhuis believe that for cheetahs however, this kind of high-volume tourism may prevent cheetahs from hunting successfully or might lead to a mother abandoning her kill due to the stress of being confronted with so many vehicles. As cheetah hunting success rates are low, this could mean the difference between her cubs eating that particular day or not, something that newborn cubs in particular cannot afford in the unforgiving savanna.

How We Can Protect Cheetahs

The research makes a number of recommendations to combat these problems,including strict quotas on how many tourist vehicles are permitted at any one time. It also says that minimum distance limits should be enforced to put the animals at greater ease and prevent unintentional interference with the animals’ behavior.

Others have called for off-road travel to also be banned to ensure disturbance is kept to a minimum and allow cheetahs and other animals to have “escape routes”, should they want to be away from the public. This could be part of minimum welfare standards.

These findings are important because, while they should be corroborated and explored with broader research, nothing is lost by enforcing these standards, and we may help protect vulnerable cheetah populations.

It is also important to note that wildlife tourism can sometimes be the difference between animals being conserved and being hunted, as it creates employment opportunities and teaches why conservation is critical.

Anything that can make tourism better for the animals we are trying to maintain and help flourish is welcome news, and these actionable steps should be adopted without delay.