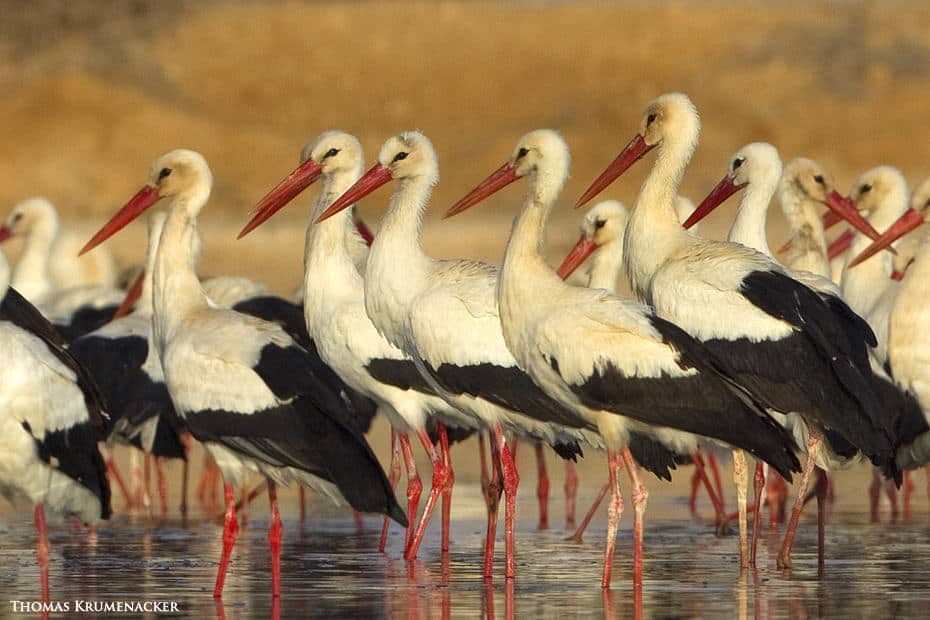 Israel is one of the most important bird migration bottlenecks in the world. Twice a year, when the call of warmer climes springs nature into action, an estimated 500 million birds make their spectacular odyssey: amongst them, the entire global populations of Lesser Spotted Eagles (~100,000) and Levant Sparrowhawks (~60,000), the entire European population of Great White Pelicans (~50,000), as well as impressive numbers of White and Black Storks. Yet, life on the migration highway brings its challenges for birds and humans alike.

Upon arrival in Israel, many species – already under pressure to find suitable habitats and food sources – are increasingly jeopardized by man-made obstacles stemming, in particular, from urbanization and agriculture. The Society for the Protection of Nature in Israel (SPNI), BirdLife’s Israeli partner, is working hard to coordinate the joint efforts of NGOs and government agencies (notably, the Israeli Nature and Parks Authority, INPA) to mitigate these risks with some very exciting projects.

Historically, the Eilat saltmarsh that once extended north from the Gulf of Aqaba was one of the most important stopover sites along the migration flyway: its unique position, at the northern tip of the immense desert region, offered essential respite to weary winged travelers. However, with the modern urbanization of Eilat city in Israel and Aqaba in Jordan, the saltmarsh all but disappeared. In its stead are man-made habitats – mainly cultivated fields, salt-production ponds and gardens – less hospitable to those with feathers. In recent decades, SPNI’s southern branch, the International Birding and Research Center Eilat (IBRCE) has been attempting to turn back the ecological clock, using careful management practices to restore sections of the saltmarsh. Birds are responding well to their new sanctuary and, excitingly, the IBRCE has recently secured funding to extend the project by a further 100 acres.

Understandably, the Israeli government is committed to developing renewable energy sources. While this in itself is a step forward, when it comes to wind power the matter is complicated by Israeli’s unique geographical position. Building wind turbines in a country that sits along the world’s busiest bird migration bottleneck is simply asking for bird collisions to happen. Currently, several large wind energy projects and their allied transport powerlines are planned for the most at-risk sites for bird collisions, Eilat and Hula Valley. SPNI experts are part of a national regulating team that tries to minimize the number of wind farms and divert them from the most compromised sites to safer alternative locations. This is a serious challenge; however, by using our decades of monitoring data we can provide a solid scientific basis to our efforts.

The march of time has also been unkind to Israel’s wetlands and swamps. Over the last century, almost all of these areas were drained, and many were converted to modern fish farms. Today, these man-made wetlands are key refueling stopover sites for huge numbers of migrating birds, leading to inevitable conflicts with fish farmers.

Great White Pelicans have been in the eye of the storm in recent decades. As the heaviest bird to take to the migration highway, it needs to consume large amounts of fish to fuel its flight across the Sahara to the Sudan marshes. Some European populations are declining due to the degradation of wetlands along the entire flyway as well as other forms of human interference. In Israel, flocks typically land for a week or two; this vital refueling stop is their last opportunity to feed before their long crossing of the desert. Here, the abundance of relatively secured food sources – offered most unwillingly by fish farmers – creates serious management challenges.

SPNI, in collaboration with INPA, the Ministry of Agriculture and fish farmers, has been leading a long-term conservation project to minimize this conflict. Allocated feeding habitats, stocked with non-commercial fish, have been established, allowing quick and effective refueling for the pelicans while simultaneously reducing pressure on neighboring fish farms. While there are still some local conflicts with farms, SPNI believes that close collaboration and communication between all stakeholders will allow sustainable management of the stopover sites.

Another conflict in these troubled waters stems from large nets erected by fish farmers to protect their stock from birds seeking much-needed food and water. Such nets, if not perfectly maintained, kill many birds annually, including significant numbers of Black Storks. In another collaboration with INPA and fish farmers, SPNI has been removing old and badly-maintained nets and rescuing trapped birds. The result has been a 90% decrease in bird mortality rates. In view of such success, SPNI proposes to extend this project to all net-covered fish farms in the country.

Sadly for their owners, due to global market forces, some fish farms are going out of business. But in collaboration with fish farmers and ecotourism operators, SPNI promotes several restoration projects in the Hula and Jordan Valleys, and along the Mediterranean Coast. Here, old fishponds are restored back to natural habitats, supporting both birds and ecotourism.

SPNI is delighted to share these stories of success in the hope that they inspire similar belief in ecological ‘second chances’ worldwide.

This article was first published by BirdLife International on 05 Oct 2016.