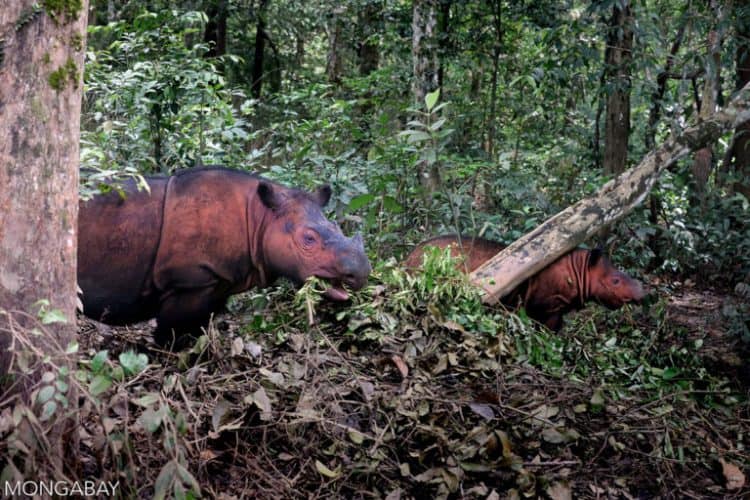 JAKARTA — Conservation officials in Indonesia have broken ground on a new sanctuary for Sumatran rhinos, part of ongoing efforts to breed the critically endangered species in captivity and stave off its extinction.

The groundbreaking for the facility took place on Nov. 11 inside the Leuser Ecosystem in East Aceh district, in Aceh province at the northern tip of Sumatra.

The new facility, the third in the Sumatran Rhino Sanctuary (SRS) network, is one of Indonesia’s top strategies to help prevent the Sumatran rhino (Dicerorhinus sumatrensis) from going extinct in the wild.

It is geared in particular toward the subpopulation found in the Leuser Ecosystem. The first SRS is in Way Kambas National Park in southern Sumatra, and the second in eastern Indonesian Borneo.

“The groundbreaking of the sanctuary is the beginning of a new momentum and our hope is that the construction process will go smoothly so it will be in line with our planned strategy of rescuing the rhinos,” Dedi Yansyah, program coordinator at the nonprofit Leuser Conservation Forum (FKL), told Mongabay in a phone interview on Nov. 12.

The SRS in Leuser will span about 130 hectares (320 acres) of an ecosystem that’s also the only place on Earth that’s home to rhinos, tigers, orangutans and elephants. The first phase of construction will see the establishment of four paddocks, a permanent boma, and a workers’ camp, and is expected to complete by March next year, Dedi said. “These are the basic requirements to have before we start to rescue rhinos,” he added.

Dedi said at least five rhinos will be captured from the wild and moved to the new sanctuary, where they will be part of the captive-breeding program. “These are isolated rhinos in the Leuser habitat,” he said.

Rhino experts around the world decided in 2017 that the captive breeding of Sumatran rhinos, from both Sumatra and Borneo, was the only viable option to save the species, which is now found only in Indonesia after the death of Malaysia’s last captive rhino in 2019. The species once ranged across South and Southeast Asia, from the Himalayas in Bhutan and India, to southern China and down the Malay Peninsula. But it has been devastated by a series of factors, from poaching to habitat loss and, more recently, insufficient births.

The initiative agreed to in 2017 mirrors a similar effort in the 1980s to capture Sumatran rhinos for breeding. That program, however, collapsed a decade later after more than half of the animals died without any calves being born. But a string of successful captive births in both the United States and Indonesia, and a growing consensus that the species will go extinct without intervention, have laid the groundwork for the latest captive-breeding effort.

Indonesia’s captive-breeding program currently has eight Sumatran rhinos in two sanctuaries: seven in Sumatra’s Way Kambas and one in the Kelian forest in Borneo. The Leuser Ecosystem is touted by experts as the most promising habitat for wild rhinos because it’s believed to have the largest population of the species, at about 12 individuals. (Estimates for the Sumatran rhino’s total population range from 30 to 80.) But conservationists still understand little about the mountainous area, and the incidence of poaching there is believed to be higher than elsewhere.

The Leuser sanctuary is prescribed in a decree issued by the environment ministry in December 2018, which also includes proposals to double the capacity of the Way Kambas sanctuary; partner with Malaysia, which has a stock of harvested eggs for fertilization; and boost efforts to capture more rhinos in Borneo and house them at the Kelian sanctuary.

Dedi said the establishment of the rhino sanctuary in Leuser would contribute to the full protection of the larger ecological landscape which, conservationists warn, faces the main threat of road development projects.

“We want to see the rhinos produced in the SRS being released back into the forests,” Dedi said.

This article by Basten Gokkon was first published by Mongabay.com on 12 November 2021. Lead Image: Sumatran rhinos in Indonesia. Image by Rhett A. Butler/Mongabay.