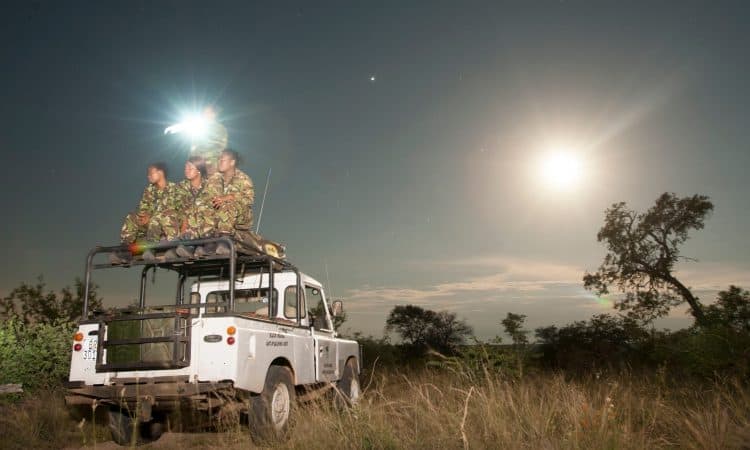 The battle against the poaching that kills a rhino every seven hours in South Africa has acquired a new weapon: women.

The Black Mambas are all young women from local communities, and they patrol inside the Greater Kruger national park unarmed. Billed as the first all-female unit of its kind in the world, they are not just challenging poachers, but the status quo.

The Mambas are the brainchild of Craig Spencer, ecologist and head warden of Balule nature reserve, a private reserve within Kruger that borders hundreds of thousands of impoverished people.

The private reserve’s scientists and managers have had to become warriors, employing teams of game guards to protect not only the precious rhinos but lions, giraffes, and many other species targeted by poaching syndicates. The Mambas are their eyes and ears on the ground.

When the poaching crisis started – in 2007 just 13 rhino were killed in South Africa – Spencer saw other reserves within Kruger “taking out the same old rusty tools that we fought this same old war with a hundred times over, rather than to say, Hey! Let’s get better tools, newer tools!”

He developed an approach that he says addresses the huge economic and cultural divide between the wealthy reserves and local communities, which he believes drives poaching.

Arrests in Kruger show that the poaching crews are not only foreigners but local South Africans from poor communities. Rhino horn is priced higher than the street price of cocaine and Spencer says cash from poaching turns communities against the park.

“The problem really is that there is this perception that has developed in the communities outside the park, they see a uniformed official and think we are the sheriff of Nottingham, they see the poachers as Robin Hood.”

“We are not going to police the problem away,” he says, standing in the shade of an acacia. “This war will never be won with bullets.”

In a bid to engage communities outside the park fence, the reserve hired 26 local jobless female high-school graduates, and put them through an intensive tracking and combat training programme. Kitted out in second-hand European military uniforms, paid for by donations, the women were deployed throughout the 40,000 hectare reserve, unarmed but a visible police presence, like a British bobby.

The numbers suggest the approach works. In the last 10 months the reserve has not lost a rhino, while a neighbouring reserve lost 23. Snare poaching has dropped 90%.

Leitah Michabela has been working as a Black Mamba game guard for the last two years. “Lots of people said, how can you work in the bush when you are a lady? But I can do anything I want.”

She stops traffic at a small roadblock where, a few days later, a group of poachers were arrested before they could kill a rhino. “Many other people, especially young ladies like us, they want to join us,” she says.

Michabela and the other 26 Mambas are looked up to by the young women in her village as heroes, within the same communities the poachers come from. “I am a lady, I am going to have a baby. I want my baby to see a rhino, that’s why I am protecting it.”

The reserve uses a team of 29 armed guards, 26 unarmed Black Mambas, and an intelligence team that seeks to stop the poachers before they can kill. The Mambas’ main job is to be seen patrolling the fence. They also set up listening posts to hear vehicles, voices and gunshots and patrol the reserve on foot, calling in the armed guards whenever they find something.

Collette Ngobeni sits quietly on top of the landrover with a spotlight under the light of the full moon. She and her team can be seen from miles away, a visual reminder to any poacher of this community’s commitment to protect their rhinos.

“If we work together as a community we can work this out. People need to open their minds, their hearts. It’s not about money, it’s about our culture, our future,” she says.

This article was first published by The Guardian on 26 Feb 2015.

If they don't it would be absurd and pointless. However if I decided to volunteer, I could take my rifle.

These mamba women need to be carrying rifles to protect themselves after having been trained how to fire them properly and safely. If people think that women patrolling an area witll stop poachers knowing the women are unarmed, think again.

I know that some people who read my comment will disagree with me, but I think these Mamba women should be carrying weapons too to defend themselves. The poachers have rifles to kill the rhinos. These women need to be carrying rifles as well to protect themselves from the poachers. Do you think ruthless poachers won't kill women ? think again.

Thank you girl's you make me proud to be a woman, I admire your courage and commitment.
I am sure if they could the rhino's would thank you for saving them from suffering and barbaric cruelty imposed upon them by poachers.

Your courage and determination to save these precious beasts brought tears to my eyes. What a role model you are for other women. Thank you for what you're doing not only for your community but for the world.