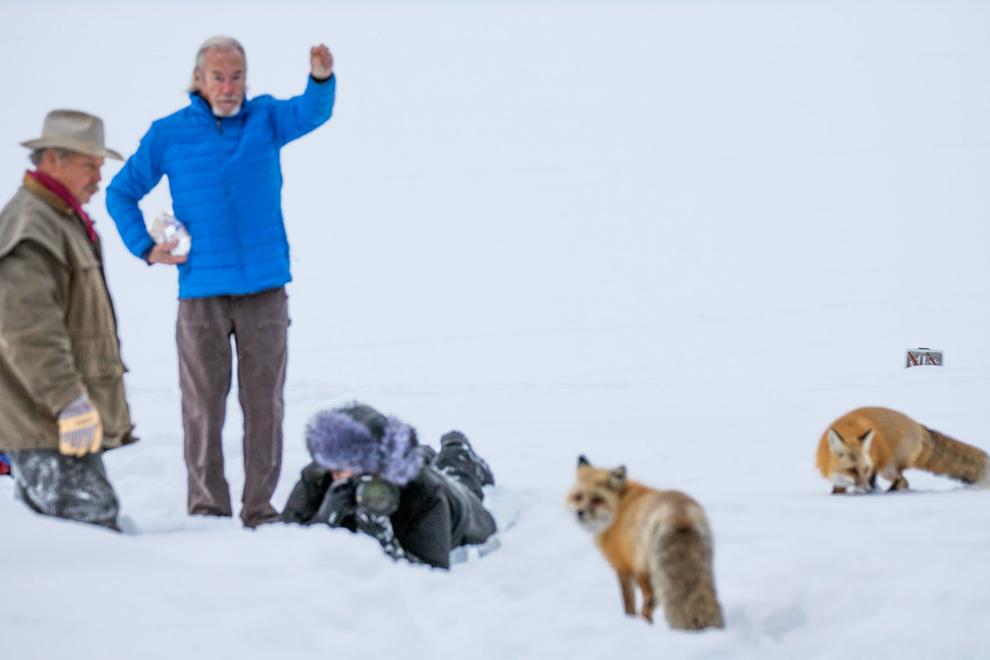 Tiffany Taxis thought it was strange to see a group of guys all dressed up like mountain men, wearing furs and carrying long guns last week near Colter Bay.

The young Jackson Hole wedding photographer is dabbling in wildlife photography, and she was drawn to Colter Bay by the habituated, brazen red foxes that frequent the area. When she spotted one of the canines, the animal was tailing the costumed crew, which was in the process of executing an old-timey photo shoot on the ice of Jackson Lake.

“I noticed that the fox was kind of following this man in blue,” Taxis told the News & Guide. “It wasn’t until I saw him drop things from a plastic bag that I realized he was feeding the fox.”

The man in blue, a Montanan named Tom Rosenthal, denied he was feeding the foxes. “I made a noise,” he said, “that’s all I did.”

Rosenthal said that if he threw anything to intrigue the animals it was cellophane wrapper from a pack of cigarettes.

Taxis, who was convinced she saw food, knew that feeding wildlife is illegal in the national park. But being all by herself she recalled being leery of confronting a group of men with firearms. She discreetly took pictures of the group manipulating the fox, and those images show Rosenthal positioned behind a photographer prone in the snow. Rosenthal, the images show, is holding some object and raising his hand to draw the food-conditioned animal in.

“The fox came running up and probably got about a foot away of the photographer,” Taxis said. “And then one of the men standing next to him said [to the fox], ‘You better do what I tell you to do or I’m going to shoot you.’”

Whether that remark was made in jest or not, Taxis was appalled. She stayed quiet other than telling the group, “I’d love to see them act together more naturally.” Her comment was met with silence. Later, Taxis did some social media sleuthing to try to figure out who it was she encountered.

Yarrow, reached on Tuesday, also didn’t perceive any wrongdoing. The British fine art photographer, who boasts nearly a half-million Instagram followers, is world renowned for images that incorporate wildlife and people, and his prints can fetch tens of thousands of dollars.

“I would vehemently deny feeding tame foxes,” Yarrow said. If the crew threw anything it was snow, he said. Yarrow made the point that he was at Jackson Lake for an unrelated shoot and that the foxes’ presence was happenstance: “The last thing on my mind was to photograph a fox,” he said. “It’s not what I’m interested in.”

Taxis reported what she saw to Grand Teton National Park’s law enforcement. Park spokeswoman Denise Germann confirmed that rangers are looking into a report of a photography crew feeding foxes in the Colter Bay area, which violates the park’s policies and has led to the bold, habituated foxes being destroyed in the past. But Germann declined to discuss specifics, citing an ongoing investigation.

One Jackson Hole wildlife photographer who knows Yarrow said that the rumor mill is running full bore about the Colter Bay incident and that the British photographer is being unfairly vilified. “I feel that people just want to trash David Yarrow because he’s successful,” Images of Nature Gallery owner Tom Mangelsen said. Mangelsen condemned feeding any wildlife in the national park. But any photographer who goes to Colter Bay this time of year is going to see the foxes, he said, and those folks — including people criticizing Yarrow — know well that the animals are accessible because they’re extremely habituated. “There’s so many people that have done that,” Mangselsen said. “To pick him out because he’s a celebrity photographer is bulls—.”

Yarrow has caught some heat for his wildlife photography techniques in the past. His use of game farm animals in Montana has been called unethical. In October, a photo he posted of a model with her back to elephants was rebuked by a number of wildlife photographers on the blog Fstoppers.com.

The blog post includes this sharp critique from International League of Conservation Photographers associate fellow Melissa Groo: “David Yarrow is infamous among wildlife photographers for his disrespect of wildlife and what’s best for them; both wild and captive animals.”

Yarrow issued a statement explaining and apologizing for the elephant photo. “I unintentionally put the message out there that it’s always okay to get out of the vehicle and be in such close range with a wild animal, and it’s not — that is when things can go dangerously wrong,” he said in a statement posted to Fstoppers.

Taxis, the eyewitness to the Colter Bay incident, said she was particularly bothered by Yarrow’s stature within the wildlife photography community, which suggested to her that he knew better. “If it was just a tourist, I would understand,” she said. “But David Yarrow knows what he’s doing, and he just doesn’t care and it’s not OK. … He endangered the life of an animal so that he could get a good shot, and it really rubs me the wrong way.”

Recent Grand Teton National Park telemetry research suggests that most foxes in the park stick to natural foods and stay out of trouble. Still, some animals have learned to key in on human foods and have paid for the behavior in the past. As with bears, the intelligent small canines learn to depend on garbage, ice fishermen’s unattended lake trout and other food that draws them toward people repeatedly. Four years ago a fox that tried to rip a garbage bag out of a woman’s hand was legally shot outside the park’s east boundary. Three winters ago Teton Park rangers euthanized a male fox that was seen jumping on vehicles and approaching people.

Rangers have been monitoring a similarly bold fox this winter: a collared and tagged fox that was at Colter Bay during the incident now under investigation, Germann said. “This particular fox is food conditioned, and I would anticipate that it will be euthanized,” Germann said. “This particular fox is becoming a hazard to visitors.” In Mangelsen’s view it’s not fair to pin the blame for that fox’s likely demise on any one person. “I’m not condoning feeding, but those foxes have been fed by the fishermen, by the tourists, by the Park Service garbage truck,” he said. “To isolate one person because he’s well-known is not right.”

This article by Mike Koshmrl was first published on Jackson Hole and News Guide on 3 February 2021. Lead Image: A photography crew draws in food-conditioned foxes near Colter Bay on Jan. 26. The National Park Service has opened an investigation into the incident. TIFFANY TAXIS / COURTESY PHOTO