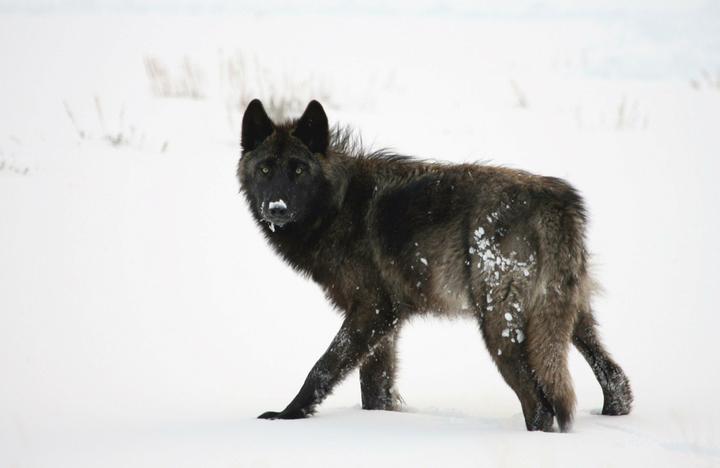 The November killing of a Yellowstone wolf outside the park has generated “hundreds” of emails and phone calls to Montana Fish, Wildlife and Parks officials suggesting that the hunt was not lawful. So far, FWP has found no wrongdoing.

“There’s no indication it was killed illegally,” said Adam Pankrantz, the FWP warden captain based in Bozeman.

But he added that his office will continue to investigate “any possible leads provided to us.”

Montana allows wolf hunting outside Yellowstone but has limited the number of permits in the region after other Yellowstone wolves were killed by hunters. The park wolves often wander in and out of Yellowstone in search of prey, to establish new territories or to avoid other wolf packs.

“We value wolves like any other species,” Pankrantz said. “And hunting is part of their management.”

The latest controversy has swirled around a female wolf known as 926F. She was shot on Nov. 24 just outside the small community of Silver Gate, near Yellowstone’s Northeast Entrance. The wolf had been named Spitfire by some wolf watchers, evidence that throughout its life the wolf spent a lot of time in fairly close contact with a portion of the 4 million people who annually visit the park. Photos and videos of 926F have graced several online eulogies.

926F’s fame came not only from her visibility in the Lamar Valley, but because she was a daughter of 832F, also known as ’06 for the year she was born. 832F was also shot by a hunter outside Yellowstone, near the small Wyoming community of Crandall in 2012, the first year that state held a wolf hunt. She was referred to as “the most famous wolf in the world” by one Los Angeles photographer.

News of 926F’s death has, like her mother, generated stories in a variety of national publications as well as on television and radio. Wildlife advocates have even started an online petition calling for a no-shooting zone on state lands surrounding Yellowstone.

The Care2 petition says the wolf was “cruelly killed” by a “trophy hunter” and adds that the “murder was completely legal.”

The wolf’s death has also raised tension in the small community of Silver Gate – where wildlife watching and park visitation generate income – and the nearby town of Cooke City, where the hunter lives.

Some residents are suggesting that the state be petitioned to create a no-hunting zone around the town to ensure homeowners feel more safe.

Some of the rumors circulating in the communities and online include that the wolf was killed while it was on a road (shooting an animal on the road is illegal) and that a resident called the hunter when the wolf was sighted (two-way communication in a hunt is illegal).

“But we don’t have any indication that happened,” Pankrantz said, despite a warden’s three-day investigation.

Another complaint being lodged with FWP is that the wolf was killed in a residential area, close to homes along Bannock Trail road. There’s no Montana law that limits the distance from a house that a hunter may shoot, Pankrantz said. A hunter could shoot from a deck or a house window if they have permission to hunt on that private property or own the property. It can be confusing, he added, because the state Department of Natural Resources and Conservation has a rule that hunting on its land isn’t allowed within a quarter mile of a nearby home.

“That’s the term in our regulations that’s often misquoted,” he said. “The closest we have in state law is one prohibiting hunting in towns, but the towns have to be incorporated,” and Silver Gate is not.

Since Montana’s first wolf hunting season held in 2009, 37 wolves that spent the majority of their lives in Yellowstone were shot by hunters, according to Doug Smith, Yellowstone’s wolf biologist. Eighty percent of the wolves killed were shot in two hunting districts outside the park’s boundaries in Montana, he added.

The park and Montana eventually negotiated to reduce the harvest limit in those hunting districts, Smith said, reaching a “compromise of values.”

“Separate from that we have the issue of wolves that live with people all the time,” he said. “That’s something we’re talking about working on.”

That could include stricter enforcement of park regulations that require people to remain 100 yards from wolves.

“If people abide by that it reduces the chance that wolves become habituated to people,” Smith said.

Park officials have killed two wolves that lost fear of humans, he added, prompting discussions about whether the park’s staff needs to be more aggressive about hazing wolves so the animals become more wary of humans when they leave the park.

“The downside to that is people like to see wolves in the park,” he said. “There are a lot of people who would be upset if we started hazing more.”

926F’s killing raises a question about how some wildlife watchers or advocates become so attached to a wild animal or species that even legal hunting – an activity where license sales generate the bulk of income for state wildlife management agencies like Montana’s FWP – is questioned or disparaged.

“You have to put it into the context of our relationship with wildlife and nature,” said Jim Posewitz, an 83-year-old Helena hunter who literally wrote the book on hunting ethics. “The wolf is there primarily because conservation has restored its prey base.”

He also noted that Montana has come a long way “since we were the boneyard of the continent” in the 1880s following the large-scale killing of bison for hides, as well as to drive Indian tribes onto reservations by removing one of their main food sources.

Yet wolves, maybe more than any other predator species, seem to be a source of animosity among some Western residents with ranching ties because for generations livestock owners worked to eradicate the species and its brethren, the coyote, to lessen livestock predation. Phrases like “Smoke a pack a day,” or “Shoot, shovel and shut up” also reflect disdain for a “devil dog” that some hunters blame for drastically reducing a once-much-larger Northern Range elk herd in the park.

The reintroduction of wolves to Yellowstone is also seen by some Westerners as a federal government overreach, overriding the concerns of locals. Last year, another well-known female wolf died inside Yellowstone near the community of Gardiner after being shot. No one has been charged in that incident.

“I think we all need to be better at teaching the context of our relationship with wildlife on the continent,” Posewitz said.

This article was first published by The Spokesman Gazette on 20 Dec 2018.

The article mentioned how “926F’s killing raises a question about how some wildlife watchers or advocates become so attached to a wild animal or species that even legal hunting – an activity where license sales generate the bulk of income for state wildlife management agencies like Montana’s FWP – is questioned or disparaged.” Now, do the crowds of people coming to Yellowstone to view the wildlife bring money to the state as well? And isn’t it a greater amount? Oh, it just doesn’t go to the state wildlife management agencies. Perhaps they should modify their operations to reflect what brings… Read more »

Taking the life of another being is the ultimate wrong doing

The Wolf is there because of long hard fight to reintroduce it there. I have to disagree with Mr. Posewitz, the prey has been there. Deer and Elk the hunters wanted. The wolf was not there after being exterminated by hunters,trappers and ranchers. All are wildlife is at the mercy of the wildlife dept that rely mostly on hunters money. So all the wildlife is managed for the hunters really and not for the people that love wildlife. The system is set up that way even though hunting is a dying activity. The state and federal governments need to except… Read more »

As u say, until the money income system supporting state F&W agencies is changed, don’t expect change. Adam Pankrantz salary is paid by sport hunting income & the wolf killing was not ‘illegal.’

Not being illegal does NOT mean there is no wrongdoing! Slaughtering wild predators merely because we believe there to be too many? That is wrongdoing..

The wolf is one of a mere handful of the most vital and necessary species on Earth. The wolf is a vital keystone species, totally the savior of his portions of planet Earth and the evolutionary event that provided life as we know it. The wolf is also the salvation of all wild, native species of flora and fauna, scientifically, biological diversity and bio means, “life”. The wolf also provided human-kind with their pet dogs; all dogs, big and small, are all 99.98 percent pure wolf. Wolves are merely wild dogs, and dogs are merely domesticated wolves. How is it… Read more »