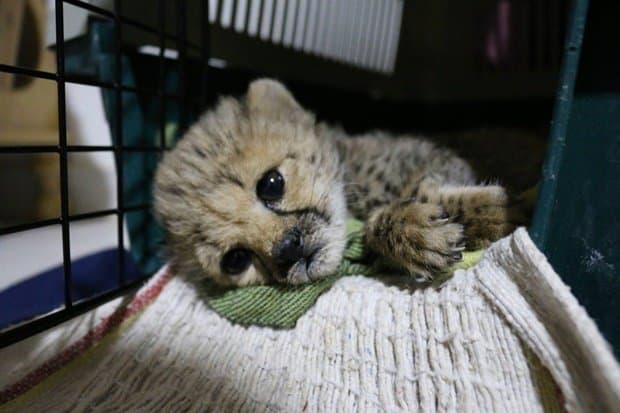 Twenty-nine cheetah cubs, destined to be sold as pets, have been rescued from an illegal smuggling trade in Somaliland.

Four Paws, a global animal welfare organisation and the Cheetah Conservation Fund (CCF) said in a statement, that the orphaned cubs were confiscated in Somaliland, the main transit route for cheetahs trafficked out of East Africa.

CCF estimates that only one in six poached cheetahs survive the journey to becoming a pet.

Cheetahs, along with other wild animals – particularly big cats – are popular in the wildlife pet trade as they are still seen as a status symbol in many countries, particularly those in the Arabian peninsula.

It’s been estimated that less than a century ago, there were over 100 000 cheetahs living in the wild. Today there are less than 7500. The effect of habitat loss and poaching has been devastating to wild populations.

The smuggling of wild animals and their parts is on the rise andDr Laurie Marker, executive director of CCF, warns that cheetah populations won’t survive if this is to continue:

“The illegal trade is threatening the vulnerable cheetah populations in parts of East Africa with extinction. The number of cubs being poached each year from small, already vulnerable, fragmented populations in the Horn of Africa is not sustainable. We need to act now, before it’s too late.”

CCF estimates that 300 cheetahs are poached and smuggled into the Arabian Peninsula every year. However, due to the illegal nature of the trade, it is difficult to get an idea of the exact number of animals being smuggled each year.

The cheetah cubs are suspected to have originated in Ethiopia, Kenya, Somalia and Somaliland.

As Somaliland law states that confiscated cheetahs are to remain in the country, CCF along with Four Paws are working with local and international partners to find adequate shelter for the animals, where they will receive the required veterinary care and nutrition.

The long-term goal is to reintroduce the orphaned cheetahs back into the wild. The age of some of the cubs however, means that this may not be possible for all of them. Many of them are younger than three months old and have had extensive contact with humans. This may pose a problem for their release.

“Keeping a cheetah or any other wild or big cat species as a pet is not only massive animal cruelty, but also dangerous for the owners and others who might come into direct contact with the animals. Moreover, it encourages poachers and wildlife smugglers to continue with their cruel and illegal businesses,”

This article was first published by Wildest on 5 August 2019.