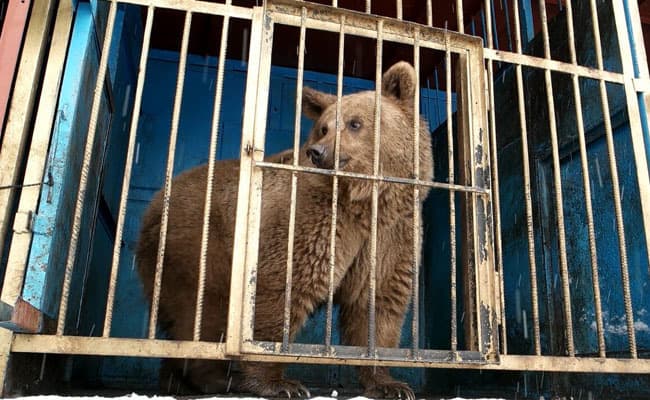 Christmas came early this year for three more lucky bears who were rescued from appalling conditions in Armenia, where they were being used to entertain people.

The rescue effort to save them from cruelty and neglect was carried out as part of the Great Bear Rescue – a larger campaign to free bears who are suffering as living attractions across the country that was launched this past fall.

The effort is being led by International Animal Rescue (IAR) and local group the Federation for the Preservation of Wildlife and Cultural Assets (FPWC), along with support from the government.

“It’s a huge relief to see three more bears rescued from lives of misery and neglect and safely in our care. The support we’ve received from around the world for the Great Bear Rescue campaign has been absolutely heart-warming.

It has enabled us to work with FPWC to end the suffering of these bears behind bars. At long last we can give them the attention and the care they deserve. And with the help of the public we’re determined to rescue the dozens more that are still waiting for an end to their torment,” said Alan Knight OBE, CEO of IAR.

According to IAR, the first was a three-year-old male who was being kept in a dark warehouse. Miraculously, he hadn’t injured himself on the rusted, jagged metal bars that confined him and was safely moved.

The second was a ten-year-old female who had spent her entire life in captivity at a restaurant. Sadly, being confined and fed an inappropriate diet led to her being overweight and her teeth were badly damaged. Fortunately, her owner surrendered her and now she’s getting chopped fruit and vegetables and is being monitored closely by her rescuers.

The third was another female who was also being kept at a restaurant. Despite being stressed when rescuers arrived, she was safely moved and is now also getting the care she needs.

Tragically, many of these brown bears have been poached from the wild and confined to barren enclosures at restaurants and other places just so they can be used to draw tourists and amuse their owners.

IAR plans on saving as many bears as it can, and will be assessing, treating and providing critical care for each individual it rescues. The organization ultimately hopes to rehabilitate and release any who are good candidates, but has vowed to ensure permanent homes in sanctuaries for any bears who are unable to return to the wild. A new sanctuary that will provide a home for bears being rescued is already being built in partnership with the FPWC and rescuers hope to save many more over the coming months.

“There are many other bears in urgent need of our attention. We are keeping focused on the job in hand and trying to reach as many caged bears as possible, as fast as we possibly can. With all these sad cases we have now, I hope people realise that it’s not fun to see a bear kept in a cage in a restaurant or a resort. This is just not the place where they belong,” added Ruben Khachatryan of FPWC.

For more on how to help, check out International Animal Rescue and its Great Bear Rescue campaign.