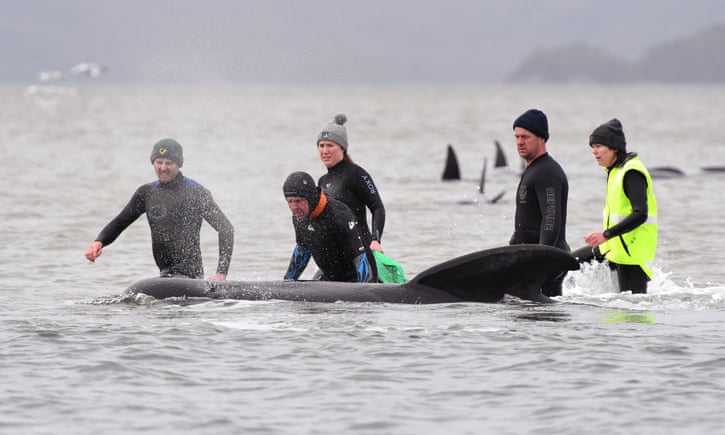 About 380 pilot whales were confirmed dead in Tasmania’s west on Wednesday afternoon with rescuers fighting to save the remaining 30 that are still alive.

More than 450 long-finned pilot whales were caught on sandbanks and beaches inside Macquarie Harbour, with a rescue effort starting on Tuesday morning.

Some 50 whales have been rescued and coaxed back to the open ocean.

Rescuers were focused on 270 whales stranded near the town of Strahan, but on Wednesday morning a further 200 whales about 10km away in the same harbour were discovered from a helicopter. Officials later confirmed all had died.

The stranding is likely one of the largest on record globally and is the worst in Australia’s history.

Nic Deka, the coordinator of the rescue from Tasmania Parks and Wildlife Service, said they were fighting to save the remaining 30 whales but focus was now turning to retrieval and disposal of the dead whales.

“We will try and rescue as many of the remaining live animals as we can.”

Dr Kris Carlyon, a marine conservation program wildlife biologist, said on Wednesday that the addition of 200 whales made this current stranding the largest in Tasmania’s history. 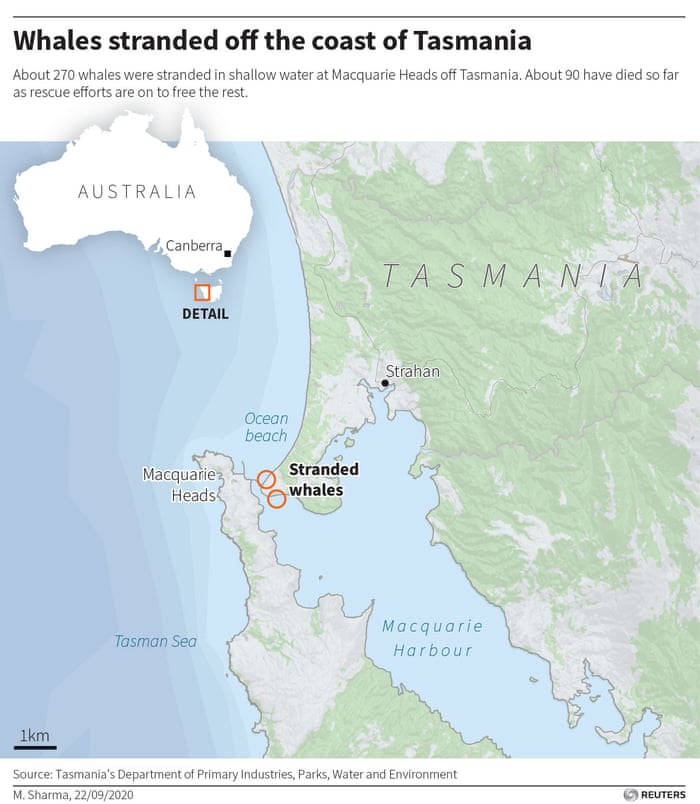 A map supplied by Reuters showing the location where 270 whales were stranded. A further 200 whales were found on Wednesday morning about 10km west. Photograph: Manas Sharma/Reuters

About 60 rescuers led by the Tasmanian government’s Marine Conservation Program entered the second day of the rescue on Wednesday focused on an area called Fraser Flats.

About 25 whales were lifted off sandbanks and pulled by boat to open waters on Tuesday, but two had returned to the main stranded pod. A further 25 were rescued on Wednesday.

Deka said the new group of 200 dead whales were in two bays between 7km to 10km south of the main rescue site.

They appear to have gone undetected and likely entered the harbour about the same time as the others. The harbour is about 35km long and about 8km wide.

Deka said: “From the air, most appear to be dead.”

Asked why they hadn’t been seen before, he said: “The water is a very dark tanin colour and maybe they stranded and then washed back in to the bay. From the air they did not look to be in any condition for rescue.”

He said even if those 200 whales had been seen late Monday when the group to the north was discovered, it was unlikely that it would have changed their strategy.

When the first 270 whales were discovered, about 90 were estimated to be already dead. “We would still have focused our efforts on Fraser Flats because they are the ones with the best chance of survival.”

On Tuesday, Deka told Guardian Australia that two methods were being considered. Burying the whales in a landfill was one, or towing them out into open water and using ocean currents to keep them offshore was another.

“We do know we can’t leave them in the harbour because they will present a range of issues. We are committed to retrieving and disposing.”

About 40 government staff and 20 volunteers, mostly from the harbour’s fish farming industry, are in chest-deep in water and manoeuvring large webbing under the whales and lifting them off the sand.

About 17 surf lifesavers with six inflatables and a jet rescue boat joined the efforts throughout Tuesday.

Tags are attached to the rescued whales to monitor them. Pilot whales are very social and need to be taken far enough away from the main group that they don’t turn around and go back.

Deka said it was disappointing that two whales saved on Tuesday had returned to the stranding site, “but the majority of the whales [we saved] are still out in deep water and are still swimming. We have been more successful than not.”

Carlyon said: “There’s nothing to indicate that this [stranding] is human caused. This is a natural event and we know strandings have occurred before and we know that from the fossil record.

“As far as being able to prevent this occurring, there’s little we can do.”

Even though Carlyon said the event was natural, there was a public expectation that the survivors should be helped.

Euthanising some animals was an option, he said, but it was not a simple practice and at this stage it was not being considered.

“We think we have a chance with the animals that are still alive.”

Dr Karen Stockin, an associate professor at Massey University in New Zealand, is an expert on whale and dolphin strandings globally and is on an International Whaling Commission expert panel on the issue.

She said the Macquarie Harbour stranding was likely Australia’s largest ever.

“It’s fair to say this will probably rank third or fourth globally [in terms of the numbers of stranded animals].”

Long-finned pilot whales, which can live for up to 40 years, were notorious for large strandings, Stockin said, because of the way they stick together in tight social structures.

“Some will remain within their pods their entire lifetime,” she said.

In a statement sent to the Guardian, Australia’s environment minister, Sussan Ley, said: “It is heartbreaking to see these stranded whales in Tassie. I want to thank the hard working rescuers and all the amazing volunteers on the ground.”

She said the Tasmanian government was leading the rescue, but the federal government had also offered support.

This article was first published by The Guardian on 23 September 2020. Members of a rescue crew stand with a whale on a sand bar near Strahan. Photograph: Brodie Weeding/AP.