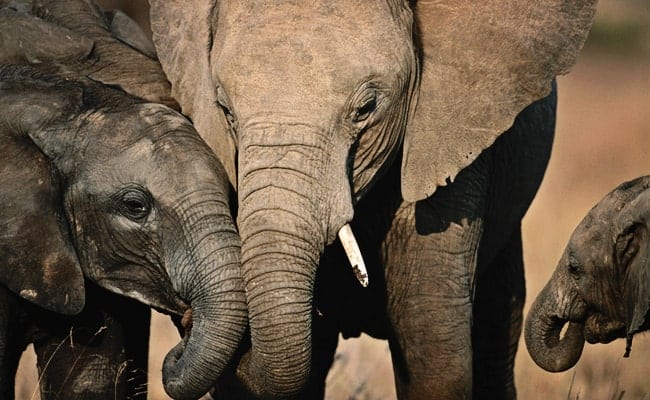 Conservationists have been warning the public about the crisis-level decline of African elephants, and now researchers have added to those concerns: an estimated 730,000 elephants are missing from areas where they should be able to survive, according to a recent study.

For a study just published in the journal PLOS ONE, researchers set out to establish how many elephants there should be in areas that are supposed to be protected, supporting natural biodiversity.

Unfortunately, after modeling using factors including elephant census data and the availability of food and water, in addition to poaching, they came to a startling conclusion – 73 protected areas spanning 21 African countries are missing 75 percent of their elephants, or 730,000 individuals, while one-third of protected areas are missing 95 percent of their elephants.

These elephants haven’t vanished, per se, but our actions, particularly poaching, have driven their numbers down far beyond what their environments can support, and this study has provided the first model of where they would be without human activities that have threatened their survival.

“Elephants thrive in a huge variety of conditions – from deserts to lush forests, so elephant density varies according to local resources. There is no single ideal elephant density. Ecologists have known this for a long time, but it’s never been quantified until now. Improved remote sensing, decades of count data, and a huge effort from my research team have enabled us to estimate benchmarks for elephant populations. The current study is the culmination of a decade of work,” said Rudi van Aarde, supervisor of the project and Chair of the Conservation Ecology Research Unit at the University of Pretoria.

Dwindling populations of elephants isn’t just bad news for them, it’s bad news for entire ecosystems. As the study notes, elephants widely affect their environments and their absence will have a cascading impact on them. They disperse seeds and fertilize the land with their dung, provide water, open up grazing areas, create habitats and homes for other species and generally support greater biodiversity.

More concerning is that the study only covered protected areas that for about 30 percent of elephants’ total range across Africa, and should be a stronghold supporting them. While the news is sobering, researchers behind the study see it as a tool that can be used to identify priority areas for conservation efforts and spur action.

“In the past, we’ve had relatively good estimates of how many elephants there are and how many are poached. But now, we’ve determined how many elephants there should be in the first place. While the magnitude of loss due to poaching is devastating—730 000 elephants are missing across the 73 protected areas assessed—I don’t see our work as more doom and gloom. On the contrary, we provide ecologically meaningful goals for elephant conservationists to work toward. It’s a positive step for elephants,” said Ashley Robson, lead author of the study.

This article doesn’t tell you that elephant numbers over 30 years ago was about 650 000 in Africa. This is not some new problem that has all of a sudden come along. Information needs to be given to the public properly, with all relevant information, without scaremongering.

How on earth could this be? Why can’t poachers be shot on site or sight. Lex talionis, an eye for an eye, and a tooth for a tooth. A life for a life. The elephant is more important than the damned poachers

Wealth will drive these numbers of elepahts evern further down iunless meaninful transparent effective non influenctial strategies are implemented and enforced to stop poaching for ivory!

I think we should put GOPO’S on them and get a picture of who the poachers are!

We should kill the poachers on sight.

Anti hunters provide nothing HUSA provides their key personnel with millions in their pocket and lifestyle of the rich and infamous.

“I don’t see our work as more doom and gloom. On the contrary, we provide ecologically meaningful goals for elephant conservationists to work toward. It’s a positive step for elephants,” said Ashley Robson, lead author of the study.” Oh joy, elephants smart, perhaps we can find a way to communicate to them, ‘Dont worry, be happy,’ your whole kind may not be doomed afterall, it’s just become a lot easier for ‘conservationists to work towards that,’ that’s all this means.

It’s difficult to think of conservation efforts around the planet as being much worse. Please go to my website, doom and destruction in every aspect where ‘conservation’ plays a part. http://cates1980.wixsite.com/cateswebsite