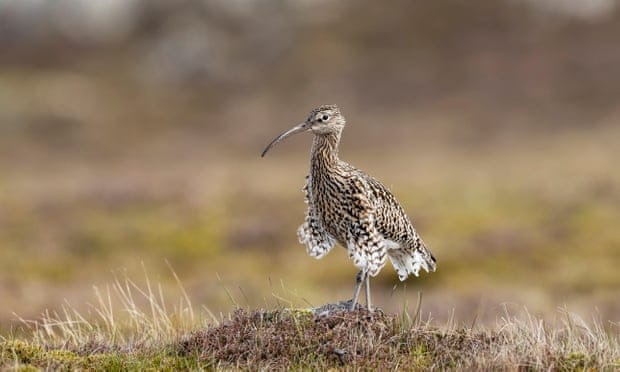 We all love trees. We think of woods and forests as green lungs, peaceful spaces, brimming with wildlife. So when Europe’s least forested country, Ireland, sets a target to increase tree cover from 11% to 18% by 2046, we should all applaud, shouldn’t we?

Unfortunately the new woodland rising across Ireland is an ecological dead zone. Sitka spruce plantations, hectare upon hectare of them, now cover what was once nature-rich farmland.

Dense blocks of these non-native coniferous trees smother the landscape, driving out wonderful and endangered wildlife such as hen harriers and curlews, birds that could be extinct in Ireland within the decade.

The home of these birds is in farmland officially designated “marginal”, exactly what is considered most suitable for swaths of sterile, densely packed conifers. Ireland’s green image, a place for nature, is a mockery.

For politicians and financiers, marginal means land that is borderline for modern agriculture. It is “rank”, “boggy”, ‘“acid” or “poor”, all words that have unpleasant undertones. Marginal land doesn’t make money compared to the large, industrial farming units, which are usually in more lowland and fertile areas. It can’t, by its very nature, support high densities of livestock or crops. It does, however, produce flowers, insects and ground-nesting birds in abundance, but none of these are money spinners in a traditional sense. The solutions supported by the government are devastating.

The first is to transform the fields into intensively managed farmland that can support cattle and produce a crop of silage at least three times a year. This is done by draining, fertilising and planting fast-growing monocultures such as rye grass. Already much of Ireland has a bright, emerald green sheen that does little for wildlife. If that isn’t possible, then the government offers generous grants to plant fast-growing trees such as Sitka spruce. Sitka plantations guarantee a return within a few decades and they also attract absent investors, often from overseas. Many farmers sell their family farms to these private companies and move out of the area. As the trees move in, silence falls across the land. No birds sing, no bees buzz, no flowers bloom. Those who have hen harriers or curlews nesting on their land can apply for grants to manage the landscape for the birds, but usually only for a few years, making this the least financially attractive choice.

For politicians in Dublin, making money from the land is a priority and they are happy to legislate to secure this. The dairy industry’s growth is one of the highest in the EU, 9.4% between January and November 2017 alone. Similarly, the forest sector has boomed mainly to offset carbon emissions from cows. Ireland is failing abysmally to meet its targets set by the EU. It ought to have cut emissions of greenhouse gases to 20% below 2005 levels by 2020, but at current rates, it will have reduced them by less than 1%. The dual pressures to grow the economy through dairy and reduce carbon emissions to meet climate change targets means Sitka spruce is marching across the land.

But do plantations of conifers really act as a cure-all for Ireland’s carbon woes? Not necessarily. A lot of carbon is stored in the soils of peatland and marginal grassland. If they are disturbed, however, by ploughing, draining, tree planting and felling, they can release more carbon into the atmosphere than will be sequestered by the trees. So simply planting trees does not equate to a net lowering of carbon in the atmosphere. In addition, agriculture remains the single largest contributor to gas emissions in Ireland, and the figure will rise under the current policy. As forestry accounts for less than 4 million tonnes of carbon sequestration it cannot make up the difference. It would surely be far better to reduce the emissions from the dairy industry than plant Sitka spruce on unsuitable soils.

Yet the planting goes on unabated, with dire consequences for protected wildlife. More than half of the six sites designated as special protection areas (SPAs) for hen harriers are now planted in Sitka. Money has trumped wildlife.

There are only around 150 pairs of breeding hen harriers left and they require a mosaic of habitats to survive, ranging from grassland, moorland and bog to open forest. But now their home is hemmed in on all sides by Sitka plantations, which form impenetrable boundaries. To stand in one of the few remaining nesting sites is to feel like a character in a Hollywood movie where someone is trapped in a room as the walls slowly move inwards. No light penetrates to the floor and no flowers grow.

As farms disappear beneath these barren forests, villages empty and there is no one left to speak out for the birds, which are forced out too. If their breeding grounds haven’t been covered in trees, the predators that are sheltered by the forests, namely foxes, crows and pine martens, make it nigh impossible for them to raise any young. Ireland’s rich, natural heritage, as treasured as any traditional music or literature, is being swept aside because it is not considered as valuable as fast-buck plantations.

The breathtaking sky dance of the male hen harrier in spring and the heart-healing bubbling of the curlew are all but gone, as these birds can’t survive without the insects that feed on wildflowers. Curlews could be extinct as a breeding bird in Ireland in less than 10 years. Kealin Ireland, a farmer from County Leitrim (a county that already has 18% Sitka coverage), is deeply worried. “We had a wonderful year with curlews flying and calling above our flower farm right throughout spring and early summer. But we’re so concerned about future years with vast tracts of lands around us being afforested with Sitka spruce. Where will the curlews nest, and how will they get to their feeding grounds at the lake?” How, indeed?

If the Irish government paid farmers on marginal land to protect the natural heritage in perpetuity, instead of planting foreign trees, then it would act as a beacon to the rest of Europe. It could use public money for the public good of planting native, broad-leaved forest in some areas yet managing other lands for endangered birds. Protecting peatland and marginal grassland would also keep carbon locked in the soil.

As pressure on governments to act on climate change increases, Ireland could be leading the way in Europe and showing that wildlife is valued and integral to a country’s natural heritage. Instead, its policy on forests and its failure on a massive scale to protect biodiversity is a disgrace.

This article was first published by The Guardian on 10 Oct 2018.

I’m wondering when will people stop using the pretext of resources in order to abuse the natural world..Is such a shame that we will do anything to grab the cash and the benefits but never look behind at what we’ve done!

in the name of “progress: we self destruct at an alarming rate.

such is the pretzelogic that runs our species.