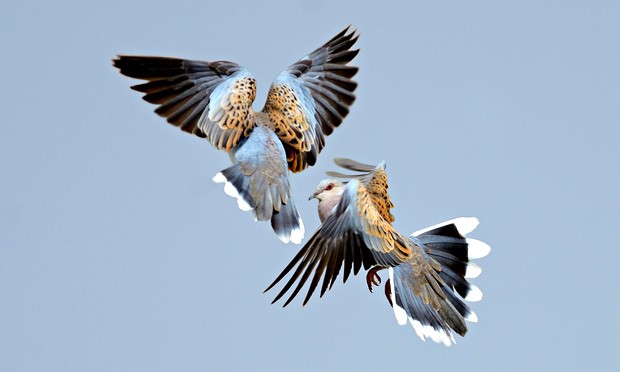 One in three European birds is endangered, according to a leaked version of the most comprehensive study of Europe’s wildlife and natural habitats ever produced.

The EU State of Nature report, seen by the Guardian, paints a picture of dramatic decline among once common avian species such as the skylark and turtle dove mainly as a result of agricultural pressures, and also warns that ecosystems are struggling to cope with the impact of human activity.

The report will embolden campaigners opposed to plans by the European Commission to review two key pieces of environmental legislation – the birds and habitats directives.

They act as a brake on development where it threatens the natural world, but the report adds weight to the case that the laws should not be watered down.

The State of Nature report found that turtle dove populations have plunged by 90% or more since 1980 and could soon be placed on the International Union for the Conservation of Nature’s (IUCN) ‘red list’ of threatened species. Numbers of skylark and ortolan bunting, a songbird illegally hunted and eaten whole in France, have fallen by around half.

Of 804 natural habitats assessed by the European Environment Agency for the report, 77% were deemed to be in a poor condition, with almost a third having deteriorated since a study in 2006. Just 4% were found to be improving.

The wide-ranging technical survey made use of data compiled by 27 EU countries between 2007-2012, and will be released by the European Commission later this year.

“The report clearly shows that Europe’s wildlife and natural habitats are in crisis,” said Andreas Baumueller, the head of WWF Europe’s natural resources unit. “Our habitats are slowly dying and our natural capital – reflected by species such as birds and butterflies – is being put under enormous pressure from unsustainable agriculture and land use policies.”

The study finds that intensive farming and changes to natural terrain pose the greatest threat to Europe’s flora and fauna, even though biodiversity loss costs the EU an estimated €450bn (£325bn) per year, or 3% of GDP.

Agriculture accounts for two-thirds of EU land use. The destruction or conversion of grasslands, heathlands and scrub to grow more crops – often using pesticides – has decimated many bird populations. Monoculture farming, changes in grazing regimes, and the removal of natural vegetation and landscape have added to the pressure.

The report also lists changes to waterways, fragmentation of habitats and human activities such as hunting, trapping, poisoning and poaching as specific threats to birdlife.

One bright spot has been the recovery of many threatened wild bird populations, such as bearded vultures, great bustards and the common crane, due to projects linked to the EU’s birds directive.

“We don’t just welcome the report,” a commission official said. “We organised this. It clearly shows the effectiveness of the birds and habitats directives and also illustrates that there is still a lot of work to do.”

The commission is currently in the throes of a review of the two directives, which will deal with enforcement as well as concerns about cost-effectiveness and potential administrative burdens.

WWF Europe is one of 100 NGOs supporting an EU-wide campaign against the review, and argues that the new report highlights how the directives have been able to shelter many bird populations, as well as large mammals such as brown bears and wolves.

Baumueller said: “The first reason for these successes is enforcement of the directive and implementation of governmental commitments. Protecting biodiversity requires thought about the needs of specific species and changes to agriculture and land use policies.”

The Alps region is identified as a relatively well-conserved area in the 182-page draft report. But the ‘Boreal’ (Norway, Finland and the Baltics) and ‘Atlantic’ (UK, Western France, Denmark and Benelux countries) emerge as danger spots for biodiversity.

In the Atlantic, Boreal and Steppic (southern Moldova, Ukraine, Russia and western Kazakhstan in Europe), no forest ecosystems were found to be well-tended, although 80% of such habitats across Europe were also judged unfavourably.

Some of the targets have already been met according to the report’s snapshot picture. Half of all Europe’s bird populations are considered to be secure, and a quarter of animals have a positive conservation status.

But the same can only be said for a fifth of habitats – compared to the 2020 target of 34% – while 86% of agricultural ecosystems received an inadequate rating.

This article was first published by The Guardian on 14 May 2015.