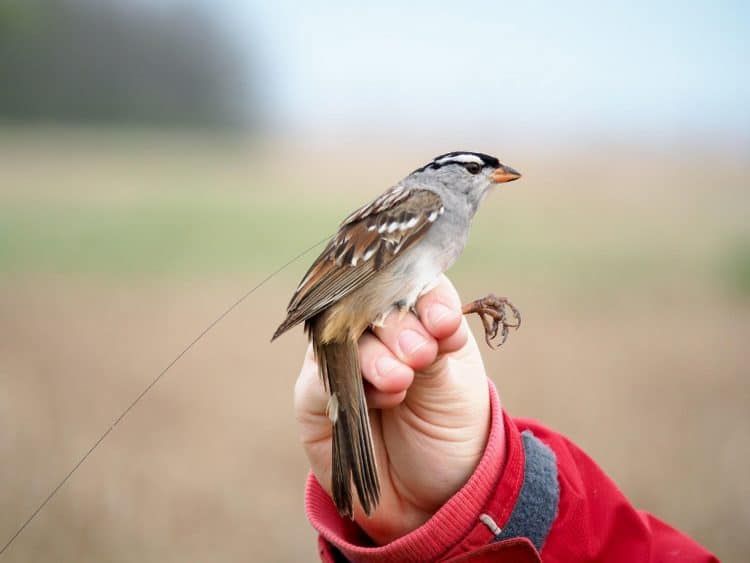 With winter approaching, White-crowned Sparrows are migrating south from North America’s boreal forest to central and southern United States and Mexico, sometimes flying hundreds of miles in one night.

The weeks-long trek is already a major endeavor for the one-ounce songbirds, and pesticides may be making the journey even more perilous, a new study shows.

When these birds make pit stops on farmland to rest and refuel, they risk exposure to pesticides, including widely-used neonicotinoids (or “neonics”)—insecticides that have been shown to negatively impact bees in the wild as well as birds studied in labs. Migrating birds are exposed to these chemicals when they eat neonics-coated seeds.

A new study published online today in Science provides the first evidence that neonics harm songbird populations in the wild. University of Saskatchewan researchers found that White-crowned Sparrows that consumed small doses of a neonic called imidacloprid suffered rapid weight loss and delayed migration, both of which can hinder birds’ survival and ability to reproduce.

“We’ve known for a while now that neonics affect individual birds in their physiology and reproduction,” says Nicole Michel, an Audubon senior quantitative ecologist who was not involved in the new research. “This study is critical because it provides a mechanistic explanation for how neonics are affecting birds at the population level.”

Poor health and reduced migration success can lead farmland-reliant bird populations to decline rapidly, a phenomenon that is already occurring, says co-author Christy Morrissey, an ecotoxicologist at the University of Saskatchewan.

Over the past decade, researchers at the university, led by postdoctoral fellow Margaret Eng, has been investigating the effects of neonics on birds. They started in the lab. In a 2017 study conducted with captive birds, they found that even low exposure to imidacloprid was toxic, causing rapid weight loss and disorientation when birds tried to take off for migration.

Birds given the higher dose of pesticide—which was still at a level reasonable to what they would encounter in the wild, the researchers say—lost a quarter of their weight within three days.

Now, for the first time researchers have tracked how neonics exposure affects free-flying birds. They captured 33 White-crowned Sparrows at a northern stopover in Ontario, Canada, and held the birds for six hours, during which they exposed some of them to imidacloprid.

They divided the birds into control, low-dose, and high-dose groups (the latter two were dosed with sub-lethal levels of the chemical, 3 to 10 percent, respectively, of the predicted median lethal dose). The researchers monitored the birds’ feeding behavior and body weight before and after pesticide exposure, affixed lightweight radio transmitters, and released them.

Compared to the control group, birds that were exposed to the insecticide delayed their migrations by 2.5 days for low-dose birds and 3.5 days for high-dose birds.

Leaving a few days later might not sound like much, but it can have serious—even deadly—consequences. “Migration is the most dangerous time period for birds because they are exposed to predators at high density,” Michel says. “So if they’re stuck for 3.5 days, there’s a much higher risk of mortality.”

Delays in spring migration, when birds are race to their nesting grounds, can also lead to reductions in breeding. “The later they get to their destination, the lower quality habitat and mate they will find,” Michel says.

Stopover sites, like the one where theresearchers captured the sparrows, are essential for birds to refuel, and they sometimes double their body weight in just a few days, Morrissey says. “The fat is the gas in their tank; if they don’t have that fat, they often will not leave or will be forced to make more stops along the way.” The lack of nourishment in dosed birds caused them to seek more recovery time, she says, and therefore led to delays to their migration.

“We’ve completely underestimated the chemical’s risk of harm to birds, especially small migratory birds,” Morrissey says. “There is a major systematic population decline in farmland birds, and these commonly-used pesticides are an identifying mechanism.”

Grassland birds are among the most imperiled groups of U.S. birds, with total populations declining more than 40 percent since the 1960s. Because 60 percent of historical grasslands in North America and Mexico have already been destroyed and converted to cropland (or in some cases for other uses such as energy development), many of these species now inhabit or migrate through farmland.

This decline is not restricted to North America: In Europe, the number of farmland birds has decreased by more than half since 1980, and agricultural expansion and intensification impact 74 percent of the 1,469 globally threatened birds, according to BirdLife International’s State of the World’s Birds Report.

Considered cheap insurance for seeds from corn to canola, neonics are one of the most widely-used pesticides in the world, and birds commonly come in contact with these chemicals during migration. In the United States, neonic-treated corn, soy, and cotton cover 150 million acres, about a twelfth of the area of the lower 48; in Canada, neonics are used on 44 percent of cropland.

Audubon contacted imidacloprid manufacturer Bayer Crop Science for comment on the study: “White-crowned Sparrows were force-fed doses of imidacloprid that they would not likely get when feeding naturally,” a representative wrote in an email. The manufacturer says that its chemical is used widely only as seed treatment for soybeans, which small songbirds do not eat, and wheat seeds, which are consumed after they are cracked open and the seed coat is discarded. “This is important because the chemical treatment is applied to the seed coat, the part that is discarded,” Bayer Crop Science comments, “so exposure levels are not likely to be as high as what the authors assume.”

A ban on neonics is not necessarily the best way to help birds, Michel says, because manufacturers and farmers will likely respond by switching to other pesticides that may be even more harmful. “Instead, what would reduce the problem is only treating [insect pest] outbreaks when they happen,” she says. “Right now, it’s almost impossible for farmers to buy seeds of certain crops that are untreated, so they don’t have options.”

Morrissey agrees, and says that neonics have become disassociated with pest problems, and instead act as a built-in protection for seeds, just in case there is a pest.

But we also need to think beyond seeds, says Morrissey. “We have a highly simplified landscape with a single monoculture crop that requires chemicals to maintain. The big thing for me is re-thinking the way our agricultural system exists,” she says. “We need to think about ways to farm biodiversity so that the system can improve in health and resilience against pests, and become less reliant on chemical quick-fixes.”

This would doubly benefit grassland birds and migrants passing through cropland. By intentionally cultivating a biodiverse ecosystem, such as by planting strips of wildflowers on farmland, White-crowned Sparrows would not only be safe from harmful chemicals but also benefit from a fruitful habitat of native plants, insects, and other migratory songbirds—some of which make fine pest-control without chemical help.

This article was first published by Audubon on 12 September 2019.