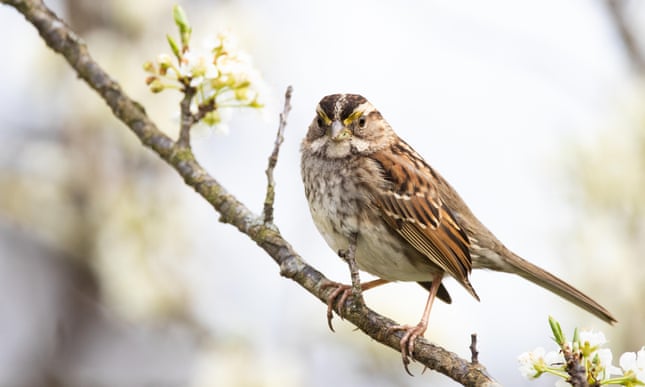 Popular pesticides are causing bird species to decline at an alarming rate in the US, adding fuel to a 50-year downward trend in bird biodiversity, a new report has found.

In addition to spray-on pesticides, farmers are widely using chemicals that coat seeds. These pesticides, called neonicotinoids or neonics, deter insects as the seeds sprout and as they grow into plants.

According to a study published in Nature Sustainability, the increased use of neonicotinoids is putting bird species at risk across the US as the chemicals manifest in the stalk, nectar and pollen of plants.

Madhu Khanna, a study co-author and associate director of research at the Institute of Sustainability, Energy and Environment at the University of Illinois at Urbana-Champaign, said a 100kg increase in the use of this seed-coating pesticide in one US county was linked with a 2.2% decrease in grassland birds.

Non-neonicotinoid pesticides were linked with only a 0.05% decrease.

When birds eat the pesticide-coated seeds or insects that have pollinated neonicotinoid-treated plants, the chemicals can harm bird development. Over time, they decrease birds’ abilities to reproduce. The chemicals can have an effect for years after birds consume them.

Neonicotinoids have increased in popularity among farmers because they do not have to be reapplied once plants are growing. However, past studies have also linked the pesticides to decreases in important pollinators, like bees and butterflies, which prompted the European Union to ban nearly all neonicotinoids.

The Trump administration has rolled back restrictions on neonicotinoids and approved a new one for use last summer.

The US and Canada have lost 29% of its birds since 1970, due to cropland expansions and pesticides use. Khanna said she expects bird populations to continue to decrease as climate change worsens and changes available habitats.

From 2008 to 2014, the researchers estimate that the populations of grassland birds – including sparrows and owls – declined 4% annually, and insect-eating birds fell 3% annually because of neonicotinoids.

More than half of the US counties studied lost more than 10% of their grassland birds due to neonicotinoid use over that time period.

Khanna said those losses can be damaging to the broader environment.

“Anything that can have an impact beyond what the target species are is concerning,” Khanna said. “Given the integrated nature of our ecosystem, the loss of any one part adversely affects the whole.”

The researchers found that bird species in the midwest and Great Plains, where farmers have been expanding cropland and increasingly using pesticide-coated seeds, were hit the hardest. Bird populations expanded in some areas of the US that have shifted away from agriculture, including Arizona, Nevada and Maine.

This article was first published by The Guardian on 10 August 2020. Lead Image: A white-throated sparrow in North Carolina. More than half of the US counties studied lost more than 10% of their grassland birds due to neonicotinoid use between 2008 and 2014. Photograph: Matthew Cuda/Alamy.