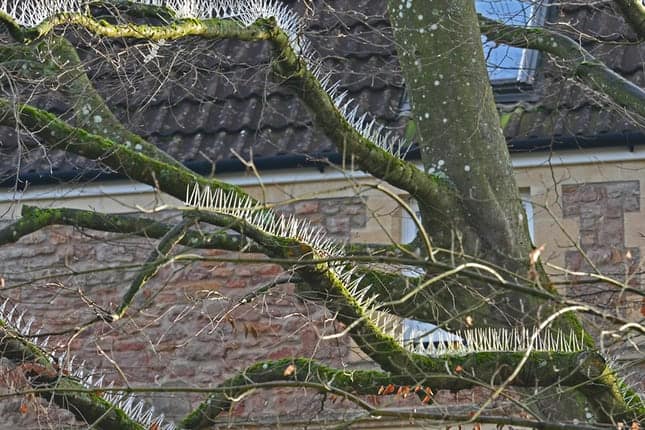 There’s a world where fearsome beasts roar through every village, town and city, every hour of the day. These creatures kill hundreds of children and adults every year. They belch toxic gases that hasten death in many thousands. And yet we genuflect to their shiny bodies – so much so that we ban birds from trees to stop their droppings defacing the skins of the beasts resting below.

If the car were an animal, we would have hunted it to extinction shortly after the first Model T Ford rolled off the production line in 1908. But we are the idiots of the Anthropocene: we tolerate all manner of human depredations but exterminate every animal guilty of the slightest inconvenience to our cosseted lives.

This week’s Twitter storm over some plastic spikes hammered on to tree branches above private parking for flats in Bristol might appear hysterical. It’s one tree. There are plenty of others. Pigeons are not endangered. Bird poo can damage car paintwork and is a pain to chisel off (I know from tedious experience, although it’s nothing that some hot water can’t sort out.) The spikes are preferable to killing the birds, or the tree (which also happens.) Anyway, the spikes were erected in 2014 and, hooray, they keep people in employment. They’re made in Britain. Another industry to celebrate.

We claim to be nature-lovers, but barely 6% of our land is protected, far lower than in most western nations

Hearteningly, however, this trivial story has gone global because thousands of people have recognised its significance as a symbol of our disastrously dysfunctional relationship with the living planet upon which we ultimately depend.

These spikes cut open modern Britain in a myriad of unflattering ways. They are not shocking or unusual, but utterly typical of a society that poisons the air we breathe, has extinguished the stars with artificial light, and builds parking lots on paradise every day of the week. They demonstrate how deaf we are to beauty: that we will sacrifice birdsong (proven to enhance our emotional wellbeing) rather than have to wipe down the Audi once a week. They reveal how intolerant we are of urban nature. We rail against “dirty” urban foxes, rats, gulls and pigeons, when it is our filth that enables them to survive so successfully alongside us in cities.

Most of all, they emphasise the extent of Britain’s estrangement from the natural world. We pioneered the Anthropocene before the baton was taken up by larger, more powerful nations. We have led the way in finding novel ways to destroy fellow species. We have purged 97% of our wildflower meadows, up to 90% of marshland, and thousands of miles of hedgerow and ancient woodland. We claim to be a nation of great nature-lovers, but barely 6% of our land is protected as nature reserves, far lower than in most western nations.

Most fatally, we barely perceive the great wealth of wildlife we have lost, or its profound benefits for us, to say nothing of its moral right to endure despite us. Instead we focus on nature’s costs. While we do this, British society continues to be built to recognise all the benefits and none of the costs of the car. We’re still spending billions on new roads that rip up hedgerows and ancient woodland, on car parks that cover meadows, and on those spikes (a bargain £4.58 per metre).

Hopes that we will liberate ourselves from this monster of our making with the coming era of driverless vehicles and the end of oil look like wishful thinking. I’ve recently read stories lamenting the loss of children’s freedom because of the car, and urging government to change transport policy to help pedestrians and cyclists. They date from 1974.

In the decades since, the vast majority of Britain’s new houses and shops have been built around the car. Road traffic continues to rise. We are more dependent upon cars than ever – no wonder they have become physically so much bigger and loom larger than ever as status symbols for many people.

Some spikes on a branch in Bristol are one small outrage, but they scream at us – whatever we are doing to our world, we really should stop.

This article was first published by The Guardian on 20 Dec 2017.