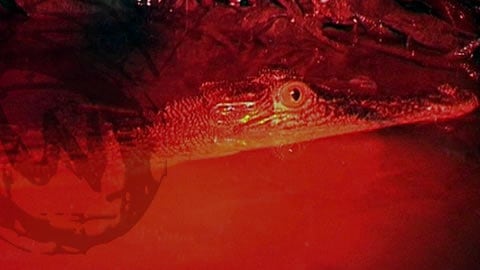 The City of Cairns, in N. Queensland is Australia’s most recognisable and liveable tropical playground. But amidst this peaceful mixed playground, an armoured and dangerous predator is spreading.

Armoured and Dangerous, the Australian saltwater crocodile, is one of the planets most efficient killers, and while two decades ago, it was an animal rarely seen or even talked about by the local residents, now the Cairns resident population needs to give way and live with them.
Bu so it seems …

With crocodile sightings now more frequent, the increasing unrest amongst the local residents is rising, placing this animal in a direct collision path with local people, environmentalists and the local authorities.

Cairns city population growth is of more than 2,000 new residents per year and with over 2 million visitors annually, pushing housing and tourism needs to new highs.

Building and tourism developments are now fast encroaching into reclaimed coastal mangroves and native crocodile habitats, unnoticeably improving and increasing these predators opportunistic territory. This growth continues to expand without any crocodile habitat guidelines, and these natural predators see this expansion as a larger and easily accessible hunting grounds.

Any crocodile encounter is not by accident, crocodiles do view humans as prey and usually hide at the first sign of human presence, whilst intruders into their domain are considered an immediate threat, ready to be destroyed.

Overtime within these new expanded geographic places a false sense of security enables residents to become less vigilant, as the increasing joyful disregard for personal safety and indifference for erected “warning signs”, is taken lightly.

In the media world, a crocodile sighting or a closer encounter inflicts the desired selling panic, firing up the sleeping controversial public opinion.

Many of those crocodile pseudo manifestations are just tell-tales exaggerations by an individual that in pursuit of media glory are “snack grabbed” by local media as nothing more than a fill-in news for their lack of newsworthy material.

Where others under the influence of alcohol, or swimming at times and in places that most sensible people would avoid, place themselves in a direct confrontation with a crocodile attack.

So, are really Cairns residents amidst a surging crocodile menace, or is it that our understanding of crocodiles only sees them as a the ultimate threat in our living and leisure arrangements?

While millions of dollars are spent on feasibility studies and endless “Memorandums of Understanding” between Local Council’s and Sate Government, one could ask the government why they finally culled the most successful ranger unit the “Crocodile Management Unit” that for over 15 year of operation these minority group of professional rangers performed the arduous task of trapping and relocating rogue crocodiles while we all comfortably slept.

Now with the intended deregulation for crocodile hunting in Queensland being supported by many of our newer politicians we will possibly witness the insurgence of the “Swamp People” … why not, Australians seem to never get enough of reality shows.

The simple statistics show that only one person in average per year in Australia is killed by a crocodile attack. In comparison three people a year die from bee stings, and thousands more from smoking and or transport related accidents and then finally, there is “fishing” – Yes fishing, one the most dangerous sports in the world – and one just has to look at hospital admissions statistics!

Crocodile attacks in Cairns are few, and the increasing sightings have the local community up in arms against the animal and within themselves. Will our heads in government ever accept the reasoning “if it ain’t broke, don’t fix it”, and bring back the “Croc Squad”,