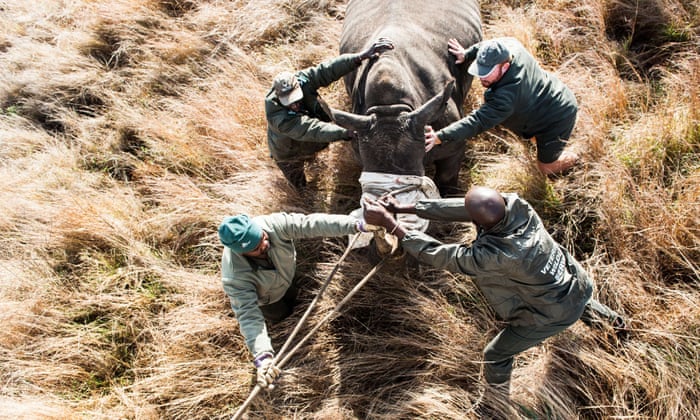 Flying a thousand white rhinos from South Africa to south Texas sounds like something out of a bad Disney movie. But the proposal to transport 6% of the country’s white rhinos to the Lone Star State, announced last week by Group Elephant and the Exotic Wildlife Alliance, underlines just how serious the illegal wildlife trade has become.

Home to 80% of the planet’s rhino population, South Africa is currently experiencing a poaching epidemic. Last week, South Africa’s environment minister revealed that a record 393 animals were killed in the country’s Kruger National Park between January and April of this year.

The animals’ horns fetch a high price – $65,000 for just over 2lb – in markets such as China and Vietnam, where rhino horn is an ingredient in traditional medicines. Illegal rhino killings increased 20% in 2014, with 1,215 rhinos dead.

Conservation groups, representatives of the South African government and individual supporters – such as ranchers – in both regions are just beginning to consider the Texas relocation plan. Private ranchers own roughly 5,000 of South Africa’s estimated 20,000 white and black rhinos, and these ranchers have good reason to cooperate with a scheme that might preserve the population.

Ranchers have long been a part of South Africa’s conservation plans. In 1900, hunting had reduced the white rhino population in the country to a mere 20 head, and the South African government decided to relocate them to zoos and private game ranches. The rhinos formed new breeding groups and the resulting offspring outnumbered the rhinos killed for trophies. Eventually the government allowed the ranchers to privately own the rhinos, further incentivizing their protection. For a time, it worked.

The proposed relocation scheme would move rhinos to individual ranches in Texas, and the relocation plan would provide South African ranchers with partial ownership of the transported rhinos’ offspring.

If the plan goes forward, the rhinos will roam free on ranch land and there will be a prohibition on hunting them or their progeny in perpetuity, said Jonathan Tager of Group Elephant.

But the plan must overcome several challenges before it can move forward: it must get approval from the US Department of Agriculture to import the animals; it must find enough ranchers in Texas who want to take the rhinos; and it must raise the funds to move the creatures, at an estimated cost of at least $50,000 per rhinoceros.

Rhinos can die in the transportation process, typically due to an overdose of tranquilizers or overheating, or a combination of the two. And the average plane can only move five rhinos at a time – moving a thousand would be a very slow process.

Those obstacles, while daunting, hardly seem worse than those rhino conservationists already face.

In the past, safe havens for the threatened species have included special protection areas within Kruger National Park – now a poaching hot spot – as well as wildlife parks and independent ranches in neighboring Botswana.

In February 2014, wildlife filmmaker and conservationist Derek Joubert and his wife Beverly, launched a campaign to move 100 rhinos out of the country.

At the time, South Africa’s environmental affairs minister, Edna Molewa, kept mum on where the critters would be moved “for security reasons”. In March this year, the rhinos were airlifted from South Africa to Botswana, which is less populated and has not experienced as many issues with poaching.

The Jouberts’ campaign, Rhinos Without Borders – now operated by their Great Plains Conservation travel business and the safari company Andbeyond – is the largest and most expensive rhino relocation to date. The team has said it hopes to collect another 25 rhinos from South Africa by year’s end and move 65 more next year.

In addition to more space, Botswana has a harsh “shoot to kill” policy against poachers. It’s also extremely controversial, but some wildlife conservationists believe it’s the only way to stem poaching.

Last year, in a discussion about elephants killed for their ivory tusks, Suwanna Gauntlett, CEO of conservation group Wildlife Alliance told the Guardian she believes strict law enforcement is the only long-term solution to poaching. Gauntlett says the international community often focuses on the problem of demand, but that it needs to give at least as much attention to protecting animals on the ground.

Still, taking on the exotic animal trade is no easy task. “Wildlife trade truly is a well organized criminal network,” Gauntlett said. “All the echelons of the food chain are held to top secrecy. It’s like a mafia. Threats on peoples’ lives are very common and they have methods to keep people in line.”

The approach of immediate, on-the-ground interventions with armed law enforcement has been effective for other species: it helped reduce poaching of Siberian tigers by 80% from 1984 to 2001, and elephant poaching in Cambodia by 98%. Wildlife Alliance pays park rangers a supplement to reduce the chances that they will be lured by bribes from poachers.

EWA and Group Elephant say they have had an enthusiastic response from South Africans to the US relocation plan, adding that the groups are beginning to line up supporters in Texas as well.

If the plan gets approval and funding, it could take years to transport all 1,000 animals – and perhaps years more to restore the surviving population to South Africa.

“In the fullness of time – when the rhino horn madness has hopefully subsided in South Africa – we would plan on repatriating some of the rhinos and their offspring to Africa,” Group Elephant’s Tager said. “In the meantime, we will continue to explore local alternatives to providing safe haven for rhinos.”

This article was first published by The Guardian on 11 May 2015.