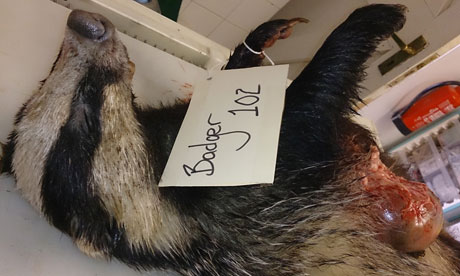 The first photographs have emerged of what appears to be a badger killed in the controversial culls taking place in England. A single high velocity bullet killed the animal, passing right through it, the vet who examined the carcass told the Guardian. Most badgers she had seen shot before the cull had been peppered with gunshot, Dr Elizabeth Mullineaux said.

Secret World Wildlife Rescue, the Somerset-based animal charity that released the photographs of the badger, said it had been delivered to them by people on an overnight ‘badger patrol’ who reported seeing marksmen searching for the badger’s body in the early hours of Saturday morning.

“It had been shot in the way that Defra [the Department for the Environment, Food and Rural Affairs] recommends,” said Pauline Kidner, the charity’s founder. “This is the third badger we’ve had in from the cull zone. The other two were road traffic accidents, but this one had obviously been shot.”

Mullineaux, who is a consultant to the charity and has been a clinical vet for 17 years, said: “A single shot has entered left-hand side of the chest, slightly behind the Defra target area. Rather than going through perpendicular therefore to the heart and lungs, it went diagonally and out the side.”

X-rays of the animal showed fragments of the bullet, and what appeared to be “one track” between one entry and one exit point. She was of the opinion just one bullet had been used, leaving the stomach and liver lobe coming out of the “sizeable” exit hole.

She said it was hard to say how long the animal was alive for after being shot, apart from the fact it had time to take flight. One of the key tests of the humaneness of the pilot culls, which are designed to see if badgers can be killed in a way that is safe, humane and effective to combat the spread of bovine TB to cattle, is ‘time to death’, Freedom of Information requests have revealed.

Kidner said she would have the badger’s body post-mortemed and then DNA-checked to see if it matched DNA records of badgers within the zone, which were taken by Defra before the cull began. She said she was taking the steps as she was certain it had been killed as part of the cull.

This article was written by Adam Vaughan for the Guardian UK.

We invite you to vote FOR or AGAINST the trial cull of badgers. Even if you’re not from the UK, please vote and also leave your comments at the bottom of this page.

There is another side to this issue, which became blatantly apparent during the national cull of Ruddy Ducks several years ago (I believe that campaign opened the floodgates). It gives a licence to kill to despicably cruel elements in society who can't believe what a wonderful opportunity is being provided for them to exercise their bloodthirsty behaviour. And it's all legal, sanctioned by Government! This will have a knock-on effect in society.