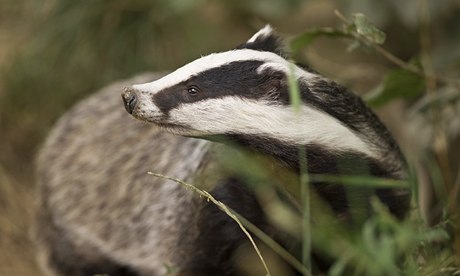 The controversial badger cull in England has been branded a “farce” by opponents after ministers confirmed the marksmen have been forced to seek extensions in order to kill the minimum number required. Despite the government slashing by two-thirds in 12 months its estimate of the number of badgers in the Somerset cull zone, marksmen still failed to reach their target.

“The whole situation is a farce,” said Gavin Grant, RSPCA chief executive. “They keep moving the goalposts on how many badgers exist and how many need to be killed but, whatever the figures, it is clear the system has failed.”

The environment secretary, Owen Paterson, who argues the cull is an essential part of stemming the rise of tuberculosis in cattle, said: “I am not moving anything – the badgers are moving the goalposts. You are dealing with a wild animal, subject to the vagaries of weather, disease and breeding patterns.”

However, Prof Rosie Woodroffe, the UK’s leading badger expert, told the Guardian such a drastic change in the badger population would be “very, very unusual”.

In a written statement to parliament, Paterson said: “Current indications suggest the pilot [cull] has been safe, humane and effective in delivering a reduction in the badger population of just under 60%. We set ourselves a challenging target of aiming to ensure that 70% of the badger population was removed during the pilot.”

“I think we have achieved a phenomenal amount,” said Peter Kendall, president of the National Farmers Union, which supports the cull. “Badger behaviour has changed from people being in the area and removing the badgers, so we’ve had to change the way we’ve delivered the cull.”

The number of badgers killed is critical to ensuring that culling reduces TB in cattle, as a decade-long, landmark trial of culling showed fleeing badgers can actually increase infections, a phenomenon called perturbation.

“The licence did not task farmers with killing ‘about 70%’ – it was ‘at least 70%’,” said Woodroffe, who worked the earlier £50m randomised badger culling trial (RBCT). “We know from the RBCT that when we killed about 30% of the badgers TB got worse and when we killed about 70% we saw a modest improvement. We know there is a tipping point in between but we don’t know where it is.”

Licences were awarded by Natural England for culling “over a period of not more than six consecutive weeks” due to evidence from the RBCT that drawn out culling increases perturbation. The six-week period in Somerset ended on Monday and will end this week in Gloucestershire. Natural England is expected to rule this week on the Somerset application to extend the night-time shoots for another two or three weeks.

“Extending the cull is an inevitable last clutch at the straw by the government and NFU, and highlights yet more flaws in a hopeless policy,” said Dominic Dyer, at Care for the Wild International: “What happened? Did all the badgers hear about the cull and take off on holiday?”

Dyer said: “We estimate the cull so far has cost around £2m, including police costs. If they kill around 2,000 badgers that works out at about £1,000 each – this must be the most expensive cull in history. Vaccinating badgers would be much cheaper.”

Previous work by Prof Woodroffe indicated a vaccination programme, for which the Welsh government opted, would be cheaper than the current cull.

This article was written by Damian Carrington for the Guardian.