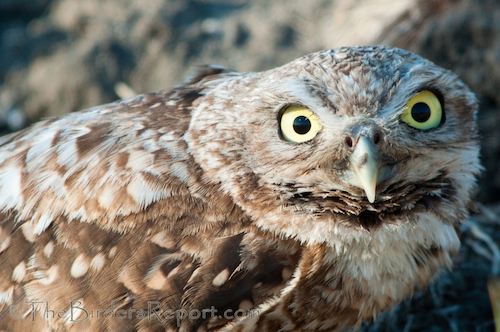 Burrowing Owls(Athene cunicularia) are active both day and night but they nest in underground burrows making them sometimes difficult to spot. If you are out looking for thesecharismatic little owls you may expect to see something like this, just a head sticking above the rim of the burrow entrance(click on photos for full sized images).

This is what it looks like when you are looking out over the grass in the early hours of the dawn with that morning glow lighting up this sleepy raptor. Burrowing Owls tend to spend time sleeping following crepuscular foraging activities in the first few hours after sunrise and in the middle of the night1.

Luckily for me, whenever I need a Burrowing Owlfix, I can drive about 2 1/2 hours south to Wildhorse Golf Club where there is a resident population of these very special owls.

The city of Davis’ 26 acre greenbelt around Wildhorse Golf Club has one of the densest populations of Burrowing Owls in the state2. They began building artificial burrows in 2003 using the turfgrass and soil plugs created during their fairway aerification process to create the owl’s above ground burrows. Now the owls have expanded their colony around the perimeter of the golf course and into the interior of the course proper, wherever there are California Ground Squirrels digging burrows that the owls can use for nesting.

Burrowing Owls most often use burrows dug by animals such as ground squirrels, badgers, prairie dogs, marmots, skunks, armadillos, kangaroo rats, and tortoises1. In California, it’s primarily the ground squirrel that does the digging for our owls. The squirrels also act as an early warning system, warning the owls when there are predators in the area.

This is a video I shot of the owl shown at the top of the post that was within a few yards of the gravel running path. He flew up to within a few yards of the golf cart path and remained perched as a golf cart drove by and, at the same time on the running path, a kid with a dog on a leash ran by on the other side. You can hear their distinctive alarm chatter call twice in the video.

Back at the artificial habitat site, one of the adults was roosting on a post, sleeping off and on.

You can see from the lack of some of their facial feathers in some of the photos that theseadultsare going through a molt following a successful breeding season.

Their offspring on the other hand have gone through their preformative molt and their juvenile plumage is barely distinguishable from the adults.

Watching this juvenile infrontof one of the burrows giving me their famous, ever so cute, head tilt maneuvers…

and showing off theirplayfulnessand constant curiosity…

sets them apart from the more sedate adults.

You can also see from the video and following photos of the juvenile preening that they still have lighter colored and un-spotted feathers on their heads.

This little one accidentally picked up a piece of straw while preening, keeping it entertained for quite awhile.

Here he or she is, all fluffed up…

The adult female is seen in the lower right corner of the following video and you will see squirrels pop their heads up as they forage near the owls.

If you are ever in Northern California and want to see Burrowing Owls, stop by Wildhorse Golf Club. You won’t be disappointed!

If you are going to be in the area and want more information on the status of the Western Burrowing Owl, the California Burrowing Owl Consortium is holding a meeting, open to the public, onThursday, September 20, 2012 from 10am to 2pm at45211 County Road 32B, Davis, CA 95618. It’s just a stones throw from Wildhorse Golf Club. Feel free to email me if you are interested!

Hi Larry, great post. I will be in California in late June / early July and plan to go up to Wildhorse Golf Club to photography the owls. I presume they are still doing well. Regards Mark Walker – http://www.markwalkernaturephotography.com

Larry, it’s great to hear that these birds are still doing well out there in Davis. We were introduced to this location during a class we took as part of the UC Davis Duck Days a few years back. Since then, we have stopped by twice to photograph them. They are really fun to watch. Thanks for posting this.