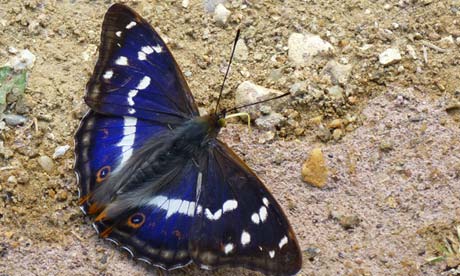 “It’s like a living stained-glass window,” enthused the broadcaster Nick Baker, as a group of naturalists bowed down before a purple emperor swooping through the oak trees. Two teams of butterfly obsessives on Friday took to battered Land Rovers in a hair-raising race to woods, meadows, chalk downland and an industrial park to find as many species as possible in the middle of a heatwave.

Marking the start of Butterfly Conservation’s Big Butterfly Count, in which everyone is encouraged to spend 15 minutes spotting butterflies in their gardens or local parks, the competition was Wacky Races – complete with near-accidents and vehicle breakdowns – meets the rather more sedate world of entomology.

“When it’s barbecue weather, it’s butterfly weather,” said Baker, leading Team Sussex on a high-speed chase, pitted against a group from Hampshire. Spotting purple emperors was a real highlight because the treetop-dwelling butterfly is one of the most elusive of our insects and has made a spectacular recovery in the recent fine weather. More than 100 individual emperors – a once-in-a-lifetime occurrence – were seen on consecutive days in a woodland in Northamptonshire by the National Trust’s Matthew Oates this week, but he warned that there was still a long way to go before butterflies returned to levels once enjoyed.

Experts say this is the best summer for almost a decade, but numbers are still at a historic low after continuing habitat destruction and the rain of 2012, the worst summer on record for butterflies.

“Hopefully we’ve turned the corner and butterflies are on their way back,” said Oates. “The nation’s wildlife – and its people – definitely need a good second half of the summer, and fingers crossed we may be getting that.”

The race harks back to the era when butterfly collectors descended upon nature reserves in their droves and swiped their nets at rare butterflies. These insects are too rare to be collected these days, but each sighting was greeted with whoops and cheers before it was tweeted and photographed.

“This competition gets very heated but the whole point of this is to draw attention to the plight of these fantastic insects,” said Baker. “We’re haemorrhaging our biodiversity, and not just our butterflies. If our countryside was healthy these vagaries of weather would be much easier to cope with.”

Both teams found nearly half of Britain’s 59 native species – an impressive tally in a single day and a welcome sign that many insects are thriving in the heatwave.

This article was written by Patrick Barkham for the Guarduan UK.