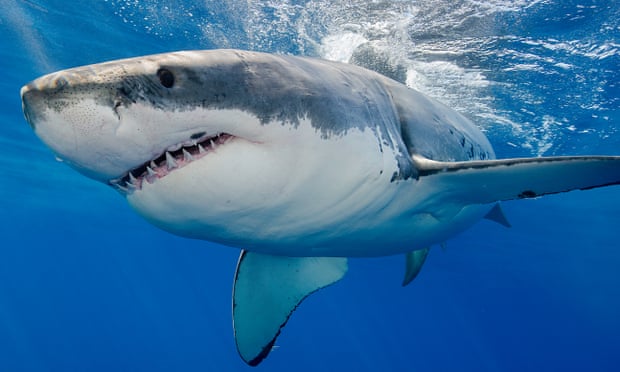 A surfer was severely injured in an attack by a great white shark off California on Saturday, one month after researchers found that numbers of the predator were growing in the region.

The 35-year-old man was able to swim to shore at Gray Whale Cove beach close to San Francisco, where rescuers applied a tourniquet to his right leg.

The man was released on Sunday. The shark that attacked him was estimated at between 6ft and 8ft, the San Mateo county sheriff’s office said, indicating it was probably a juvenile.

“It was only one bite and there were about 10 lacerations to the back of the right thigh,” Brian Ham, battalion chief of the San Mateo fire department told Bay Area’s CBS5.

“Usually [the sharks are] within the surf zone, so they’re within 100ft to 200ft of the actual beach. It’s shallow but a shark can attack very close to the beach.”

Last month, marine ecologists at Montana State University found that great white numbers were up in northern California’s so-called “red triangle”, which runs north from Monterey Bay to Bodega Bay and about 20 miles offshore to the Farallon Islands. Gray Whale Cove is at the center of the coastal stretch.

The seven-year study, funded by Stanford and the Monterey Bay Aquarium and supported by Oregon State University, concluded there were 266 adult and sub-adult great whites in the triangle, a “modest” increase on a decade earlier.

But the researchers said it was a “clear indication” that ocean conditions were improving, with associated benefits to marine life.

“We are cautiously optimistic that this is a good news story for the ocean ecosystem off California,” Paul Kanive, lead author and a veteran member of the California white shark tagging team, told Newsweek.

“The findings are a good indicator of the overall health [of the system]. As an apex predator, white sharks need a healthy structure of other animals in the lower levels in the food chain. The preferred prey of the white shark, coastal seals and sea lions, have rebounded to very high numbers, thereby providing sustainable and plentiful food sources for the sharks.”

The biologists tagged sharks between 2011 and 2018, taking more than 1,500 photographs and using distinctive, jagged dorsal fins for identification.

Similar research published in 2011 suggested the presence of 219 adult and sub-adult great whites in the same region. The headline figure in both studies was the average of a possible range in numbers.

Preservation measures including California’s 1994 ban on the killing of great whites in state waters to three miles are credited with the species’ resurgence.

Despite their reputation as the most dangerous shark species to humans, the likelihood of a white shark killing or injuring a surfer is one in 17m, according to research published in 2015 – a 91% drop from 1950 to 2013 as the number of attacks remained constant while the human population increased.

This article by Richard Luscombe was first published by The Guardian on 28 June 2021. Lead Image: A great white shark swimming just under the surface. Photograph: By Wildestanimal/Getty Images.