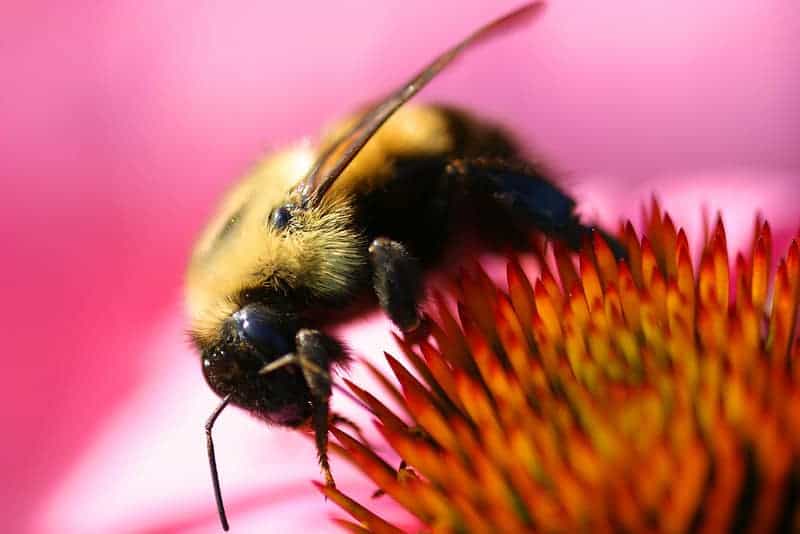 It may surprise you that I believe Canon’s 180mm macro lens to be the best macro lens for nature photography.

It’s smaller, lighter, cheaper, auto-focuses faster, has a wider maximum aperture, and it even sports a new hybrid form of image stabilization.

And, whatever differences there may be in image quality, they are probably imperceptible in real life situations.

So why would I recommend the the 180mm f/3.5L over the 100mm f/2.8L? Well, I should concede that the 100mm f/2.8L is probably the better lens for some people. Those needing IS will likely benefit from it; those who would also use this lens for portraits and other uses may also have good reason to opt for this lens over the 180mm f/3.5L. But I’m concerned here with using this lens as a macro lens for nature and wildlife photography–flowers, insects, spiders and other small things in nature. There are two advantages to the 180mm maco that still cause me to favor it over the other possibilities.

Working Distance. Both lenses allow you to focus at 1:1, meaning that the image is recorded on the sensor at the same size as it is in real life. But because of the longer focal length, the 180mm lens allows you to focus to 1:1 at a greater distance from your subject than the 100mm lens allows. That greater distance allows you to stay farther away from insects, spiders and other creepy, crawly wonders in nature. And the farther away you can be, the less likely you are to scare your subject into leaving.

Background. The longer focal length of the 180mm macro also means that the background behind your subject will be larger in the frame compared to the 100mm macro. This to me is a huge advantage. For one thing, it allows you to isolate a smaller area behind the subject so that it will be more uniform–that is, it’s easier to get a clean, uniform background using a longer focal-length lens. For another, it’s easier to make the background will look blurrier.

Let me be clear about this though. Set up your camera with a 180mm macro, and photograph a subject at 1:1 at f/8; then set up the same camera with a 100mm lens, move closer to your subject, and photograph the same subject at 1:1 at f/8. The depth of field will be the same in both photos However, the out of focus background in the photograph with the 180mm lens will be larger compared to the photo taken with the 100mm lens. And because the out of focus background is larger, it’s blurriness will be more apparent to the viewer. If blurry backgrounds are something you desire, you want a longer focal length macro lens.

Now there are definite advantages to the 100mm f/2.8L, but for my uses and preferences, they do not trump the advantages of the 180mm f/3.5L. Let’s look at each of these advantages to see what I mean.

Both lenses are great lenses, and if you buy the 100mm f/2.8L lens, I doubt very much that you would be disappointed with your choice. It’s a great macro lens, and in many ways it’s more versatile for portaits and other uses. But purely for macro photography of flowers and small animals, I much prefer the 180mm f/3.5L.

Hi Scot, Great article. I also started with the 180mm as my first macrolens, but I think there should be a little warning here for starting macrophotographers. Although you mentioned al the pro’s and con’s as far as I can see, I would recommend the 100mm or even the 60 mm EF-S lens above the 180 to start with. Most starters would like to start at once and would not carry a tripod with this kind of pictures. As long as the small creatures of this world are not moving you can use a tripod, but as soon as they… Read more »