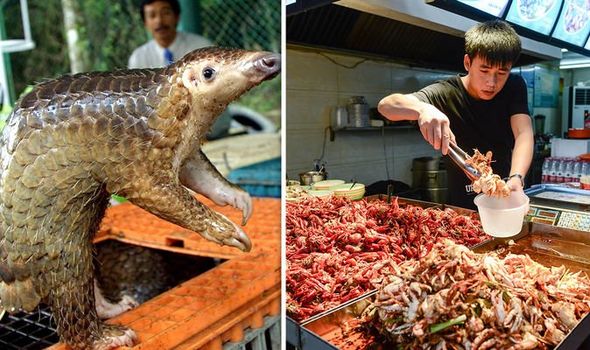 Pangolins, which are often mistaken as reptiles, are actually the only wholly-scaled mammals in the world, with four known species found in Asia and two living in Sub-Saharan Africa.

These small, soft animals have been under threat for decades from poachers, as their scales are used in Chinese traditional medicines, leading to some species in Asia becoming “critically endangered,” according to the International Union for Conservation of Nature (IUCN).

Though illegal to poach and trade, pangolin meat is prized as a delicacy in parts of China, which has led to the underground black market force-feeding the animals to increase their weight and price, and, in some cases turning to the African colony to solve the problem.

Sir David Attenborough – with the help of conservationist Maria Diekmann – exposed the rogue tricks used during his BBC series ‘Natural World’, when cameras visited a wildlife rescue centre in Vietnam.

The 93-year-old said in 2018: “This is a Sunda pangolin and this adult female has been at the centre for five weeks and is being prepared for release. “Unlike the Cape pangolins that Maria knows, the Sunda spends much of its life in the trees.

“It’s the most widely distributed species in Asia, but, as a result of illegal trade, it’s now critically endangered. “Sophisticated criminal networks smuggle pangolins from the forests of Southeast Asia and across the borders.”

Sir David went on to reveal how conservationists from Save Vietnam’s Wildlife have seen an influx in confiscated pangolins. He added: “Roughly 10 percent are intercepted by authorities, but the vast majority slip through the net.

“The trade is worth hundreds of millions of pounds.“Save Vietnam’s Wildlife is a lifeline for pangolins rescued from the black market, they’ve received over 400 this year alone and more are arriving all the time.

“15 Sunda pangolins were confiscated near the Vietnamese border with China, the team assess the surviving animals for any sign of injury.”

But, Sir David went on to detail a heartbreaking tactic that has been more recently exposed. He added: “They’ve all been vomiting a yellow substance.

“These pangolins were destined for the dinner table and force-fed to increase their weight and price.”

She said: “The yellow indicates that they were force-fed. “Every single one of these pangolins went through the same thing. “They were handled by a bunch of loud, noisy people, pumping rice into their stomachs.

“The amount of animals coming in is almost overwhelming, if the demand continues to increase in Asia, then Africa is heading for the same situation.”

But China’s relationship with pangolins may soon be forced to change after scientists at the South China Agricultural University in Guangzhou linked pangolins with the recent coronavirus outbreak.

At a press conference on February 7, researchers Yongyi Shen and Lihua Xiao, compared coronaviruses from pangolins and humans infected in the outbreak, claiming the genetic sequences were 99 percent similar.

However, there was a twist in the story.

On February 20, the scientists posted a preliminary version of the study on the preprint site bioRxi, where they clarified that while the pangolin virus was “genetically related” to the one infecting humans, it was “unlikely to be directly linked to the outbreak because of the substantial sequence differences”.

On February 24, China announced an immediate ban on trading and eating many wild animals, including pangolins.

Officials began shutting down wild animal markets across the country, giving pangolins a glimpse of hope for the future.

But, there are still fears among international conservationists that this will only cause the black market to thrive, hiking up the price of the prized delicacy.

This article was first published by The Express on 23 April 2020.

They just about eat anything

They are missing a human trait……..they’ve sold that to be this.

China needs to be buried. All countries have cruelty but I don’t think there is anyplace worse than China, Korea and Vietnam

Every country has flaws especially to some big nations with agricultural contexts, there is no point to attack Chinese or being racists just for so called wild life peace! As we humanitarians believe in, this is the time when all other nations should gather up and work for wild protections but not blaming this and that.

There is every reason to attack the Chinese for their attitude towards animals, wild or domestic. They are people without empathy or sympathy towards animals of any kind – they see animals only as a commodity – food or pseudo medicines that have been debunked by the scientists around the world.

Travis Taylor they ser not Black or White

Travis Taylor what would You Call them

I’m still waiting for a Meteor to annihilate China, except for the good people who save Animals rather than kill them.

STILL, they are doing what caused the coronavirus to begin with!!!! What is wrong with these idiots!!!!

Canada and World Governments stop trading or dealing with EVERY country who are ABUSING ANIMALS, until they STOP THIS INSANITY!!!!!!

Bul Bul Ghosh why don’t u put notice on their legislations of banning dog meat festival and all form of wild life trade? Every country has flaws especially to some countries with agricultural history! Or lemme ask you how many years have western countries been eliminating racism?

I really do not understand the title of this article: China Rage. The pangolins were caught in Africa and Southeast Asia, they were force-fed in southeast Asia, and they were intercepted in Vietnam. Why “China Rage?” It has nothign to do with China. By the way the yellow stuff used in forced-feeding is corn meal, not rice. Mainly due to the forced-feeding, Almostall the pangolins would die in a short period of time after they are seizued or traded, so the end users hate that practice as well.

The “China Rage” is because WHEREVER these animals are poached, trapped, caught, transported, force-fed and killed, it is specifically because of the irrational demand for bogus “traditional Chinese medicine.” That may be directed by a specific segment of China’s population (i.e., wealthy, corrupt and manipulative) but it is giving ALL of China a black eye.
The yellow color of the scales in the forced, rice-fed pangolins does not necessarily indicate corn meal – it is a molecular effect on the exterior scales indicating ANY excessive, forced food.

China is a barbaric country!

These savages should be isolated from the rest of the world.

We are trying , let’s hope after this disgusting virus we can descend on China and bury this aberration for once and for all!

Well, here we are again – the Chinese and their penchant for “delicacies”. Anyone with half a brain wold know that pangolin scales, rhino horn, goat horn, pickled tiger and all the other stuff they claim has traditional medical properties is about as useful in medicine as a house brick. When are they going to drag themselves into the 21st Century regarding medicine and stop pushing these defenceless animals to extinction. We’re now seeing what happens when you illegally trade these endangered wild animals – spillover of disease from animals to humans (zoonosis). Let’s be honest – we almost deserve… Read more »

There’s no “almost” about it – we DO deserve it.