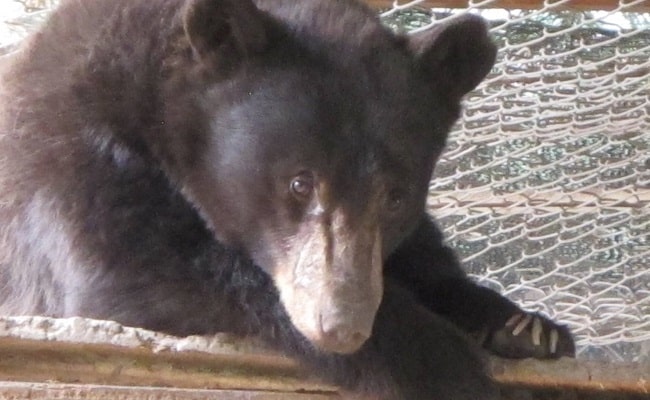 One evening in July 2014, as the worst wildfire in the history of Washington State burned nearby, a little bear cub with third-degree burns on each of her paws crawled up a driveway into Steve Love’s backyard.

Love gave the emaciated cub fruit and water through the night until an officer with the Washington Department of Fish and Wildlife (WDFW) could arrive the next morning. As the cub held her paws in the air and whimpered in pain, Love kept assuring her she was going to be okay.

The officer took the cub, now named Cinder, to Rich Beausoleil, the WDFW cougar and bear specialist. Beausoleil treated Cinder’s burned paws as well as burns on her ears, muzzle and chest.

He arranged for Cinder to be transferred to Lake Tahoe Wildlife Care (LTWC), a treatment and rehabilitation center in Northern California.

Cinder was flownthere in a two-seater plane, by Bill Inman, a Seattle pilot who volunteers for the nonprofit animal transportation organization Pilots N Paws.

After healing at LTWC for about three months, Cinder was moved to Idaho Black Bear Rehabilitation (IBBR) near Boise to help prepare her to return to the wild. She befriended a younger male cub named Kaulana who wouldn’t leave her side.

CBS Newscalled Cinder’s case a “storybook rescue”.Proceeds from Cinder the Bear, a children’s e-book about her “Rescue, Recovery Rehabilitation and Return,” were donated to LTWC and IBBR. Cinder became an inspiration for those impacted by the Washington wildfire and warmed hearts around the world as, thanks to her caregivers, she made remarkable progress.

“Each bear has its own personality,” Sally Maughan, the founder and president of IBBR, told Methow Valley News. “She was a mellow, calm bear.”

In June 2015, when Cinder was two years old, she and Kaulana were released together in an area of the Cascade Mountains that had easy access to food and water. To help instill a fear of humans in the bears, wildlife officials fired guns in the air as dogs briefly chased Cinder and Kaulana toward the forest.

Kaulana didn’t get to enjoy his life in the wild with Cinder for long. Later that year, a hunter shot and killed him during bear hunting season.

Biologists last observed Cinder alive and well in February 2017, when they checked on her and replaced her GPS collar. Later that year, Beausoleil set up cameras around Cinder’s den, hoping to capture images of the bear and, possibly, any cubs she might be having.

Cinder’s GPS collar had stopped transmitting a signal in October 2017, but Beausoleil was optimistic it was only because she was inside her den for the winter.

He was wrong. There will be no “…and she lived happily ever after” ending to Cinder’s storybook rescue.

“Unfortunately, instead of finding a den, we found Cinder’s skeletal remains,” Beausoleil told Methow Valley News. She had been shot and killed just a short distance from where she’d been released in 2015. The hunter had cut off her GPS collar.

The hunter broke no laws by killing a collared bear during hunting season. However, in Washington state, hunters that kill these bears are required to report the bear’s sex and the location where they killed them. “All my contact information is on the collar, but the hunter chose not to call. I don’t know why,” Beausoleil told Methow Valley News. He said he took solace in the fact that the bear’s meat and hide were apparently taken, so “she provided food for someone’s family.” (Or, perhaps, a bear skin rug for a trophy hunter’s home…?)

Would Cinder have been better off spending her life in a sanctuary? IBBR’s Maughan, who has cared for more than 200 bears over the past 30 years, doesn’t think so. She said she’s never observed a bear happy in that situation. “We see that in their behavior and restlessness. They will take freedom every time,” she told Methow Valley News.

Cinder “went through so much to get her freedom,” Maughan said. “Whether she had it for a day, or one year or five years, that’s what we work for. With Cinder or any other bear, once we release there’s no guarantee.”