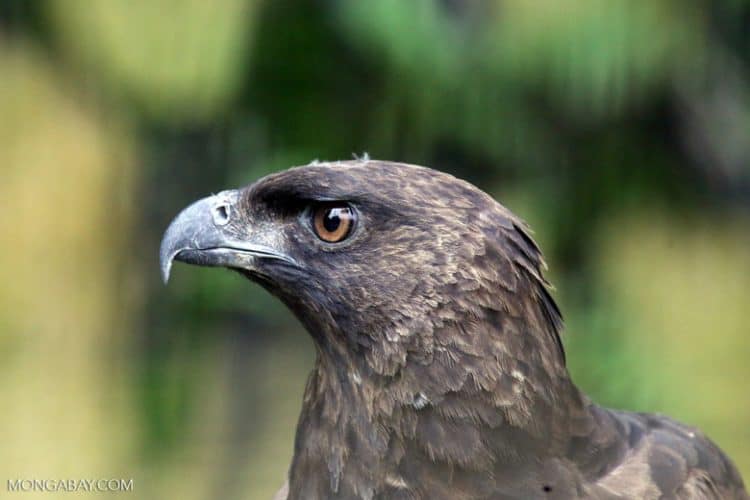 MAKASSAR, Indonesia — “Hi, This is Kamaruddin calling in, just parking my car.”

“Great, go ahead and share your experience with this broadcast’s theme with the Natural Resources Conservation Agency.”

“Thanks. So, I have a cockatoo and a hawk-eagle and I’m just learning they’re protected species. I bought them online and now if I want to give them up, how do I do that?”

Thomas Nifinluri, the head of the conservation agency’s branch in Indonesia’s South Sulawesi province, recalls the radio program from early December with an uneasy laugh. This new weekly radio hour hosted by the agency, known as the BKSDA, has shown him just how difficult it is to maintain any control over the wildlife trade, especially in protected birds.

Thomas already has his hands full. Makassar, the provincial capital, is home to both the largest wildlife market and largest port in eastern Indonesia, and it’s where officers fromthe BKSDA say almost all smuggled bird shipments from the islands of Sulawesi, Maluku and Papua pass through.

On top of that, hunters, trappers and forest clearance further inland threaten the province’s dozens of endemic and protected species.

“Makassar is like the portal from the east to the west of Indonesia, especially for birds,” says Andi Faisal Alwi of Burung Indonesia, the local affiliate of BirdLife International, which helps the BKSDA rehabilitate and release birds confiscated from traffickers. In November, the agency confiscated 74 birds on a ship from Maluku at Makassar’s port and returned the 63 remaining alive to their habitat.

But Thomas, a Makassar native, remembers this particular radio broadcast of the nine conducted so far because it highlighted the two biggest problems facing his team: low public awareness of the law, and the city’s thriving online marketplace.

In Makassar, caged birds are as common as fried-rice stalls, and some bird markets are as raucous as zoos, locals say. Just behind popular animal market Aneka Hobby’s walls of caged parrots, cockatoos and birds-of-paradise, vendors negotiate prices for bred pigeons to try their luck in the city’s bird races, or wild songbirds to shoot for contest prizes worth millions of rupiah (hundreds of dollars). Many also want a pet at home to show off at their front door.

Buyers and tourists once flocked to Toddopuli Market, an entire street lined with foul-smelling bird shops. “From Borneo,” a vendor says of a common hill myna (Gracula religiosa), yellow-eared and struggling against its cage bars more aggressively than other birds a third of its size. A bright-orange Sunda minivet (Pericrocotus miniatus) is one stall’s showcase piece, set out along a dirt walkway.

“That’s the one that was added then removed from the protected list,” Alwi of Burung Indonesia says of a white-rumped shama (Kittacincla malabarica). The species was one of five included on an updated government list of protected species this year, before being dropped after hobbyists and traders complained about the new restrictions.

Behind the market’s walls lies a platform ready for use in monthly competitions where judges, who include government officials and academics, assess birds’ songs for prizes of a few million rupiah. While opening a songbird contest in Makassar recently, Mayor Danny Pomanto said he intended to find space to open a park where birds could sing constantly. Thomas thinks it’s a good idea, if it’s carried out with appropriate care and research.

Most birds here are supplied by breeders now, but the best songbirds must be caught in the wild, Alwi says. The problem is, the networks that traffic in them are increasingly moving online.

As a result, patrolling ports, educating villagers and checking animal markets haven’t been enough to stem the illegal trade. As traders face stronger enforcement, Makassar’s bustling bird bazaars have shifted into elusive online groups. There, dealers can more easily disguise themselves behind social media accounts while they offer rare birds up for sale. Pictures of new birds to sell are posted several an hour to groups with thousands of members. It’s just like the street markets, minus the chirping, stench and, critically, identities of sellers.

So agency officers counter with their own disguises. Muhamad Rosul is part of the five-person team that checks every ship that stops in Makassar, 24 hours a day, seven days a week. But he has also been tasked with infiltrating online networks of traders. For a while he and his team were successful. They posed as buyers, spoke with dealers by phone, and rescued several birds from the trade.

“Through Facebook we found one alleyway lined with people selling all kinds of birds,” he says. “But when we got there, all the vendors had run away.

“That was still at the beginning, last year,” he adds. “We haven’t been able to find any sellers from Facebook since then.”

Officers believe buyers use a code they can’t decipher, because addresses sellers send them lead nowhere, if they even get as far as receiving an address. And when they’ve used a phone number to contact a vendor online, the number no longer disguises the officer behind it. Rosul says that as the year’s thin budget has dried up, the officers haven’t been able to get the new SIM cards required for undercover work.

Subriyanto, the technical services chief at the local BKSDA branch, says he’s toying with the idea of working with the police’s cybercrimes unit to trace phone numbers.

“They only show the image and then wait for someone to express interest,” he says. “They get the animals ready, receive the money, then send the animals without showing their faces. They use GO-JEK [a ride-hailing app] and we can’t monitor that.”

Facing low public understanding of the harmful impacts of the wild bird trade, the BKSDA has tried to meet Makassar’s residents on their terms. The weekly radio program has been helpful, Thomas says, but more efforts are needed.

Last May, the agency developed a phone application to help keep an eye on the trade. OME, short for orang melapor or “the people report,” is meant to help build a database of known locations of the animal and plant trade. Having been released only to officers so far, most of the reports have been of bird transactions and locations. Orchids are the second-largest group; the exotic flowers are also protected by law and heavily trafficked. When the application is released to the general public in January for the Android platform, Thomas says, it will also have the capacity to process animal captivity permit requests.

“This is an innovation that can be used for reporting as well as consultations if [users] want to learn, too,” says Mallombasi Mattawang, OME’s developer.

In that way, the app will also help with Thomas’s other big obstacle in Makassar.

“Awareness is a huge problem, because [the people] don’t know that certain birds are illegal,” Thomas said. “Then they don’t know about animal welfare and how to care for them, so they think putting them in cages is saving them.”

Thomas, a longtime BKSDA officer who has led the agency’s Makassar office for nearly a year, began hosting a booth at the city’s car-free day gatherings on Sunday mornings, when thousands of residents enjoy strolling down streets free of vehicles. That, in addition to busy Facebook and Instagram feeds, is new for the agency, but necessary to spread the word, he says.

The agency and its partners require huge funds to rehabilitate birds, which are sometimes confiscated thousands of kilometers from their habitats, Subriyanto says. Sometimes birds remain for weeks or months in small cages, surrounded by dozens of other raucous birds as well as monkeys, before they are taken to a rehabilitation center. That’s why Thomas has been looking into other ways to rescue birds and address the trade in wild birds.

“They can breed the animals that are legal, like the Bali myna,” he says, referring to some cases of a once protected bird that was permitted to be bred in select areas. He says he thinks the practice can work with other species too, such as Sulawesi’s endemic hawks. “Here maybe it will take some time, but we have to try. We can gather up the ones that are already taken from nature, find a spot for breeding, and make that the source for people who want birds.”

Since 2016, the BKSDA hasn’t had the authority to enforce the law, only to report cases to law enforcement agencies. Nanda Nababan, a lawyer with the Wildlife Crimes Unit, a nonprofit that works with law enforcement to catch illegal animal traders, says he’s had to change the way he works because the BKSDA can’t move fast enough in recent cases.

“We need speed,” he says. “So sometimes we have work directly with the police.”

“With the system now, we have to communicate intensely with other groups. That’s the challenge,” Thomas says. “Before, the agency could quickly handle and close an investigation. The investigators used to be able to immediately take care of a case when it arises in the field.”

But Thomas says he will keep trying.

“Caging them is the same as stripping birds of their natural rights,” he says. “It makes the birds unhappy. They need to be able to fly and eat and mate.”

This article by Ian Morse was first published by Mongabay.com on 20 Dec 2018.

Birds are god’s angels on earth and should be cherished and protected from lowlife poachers and those who partake of their evil deeds,