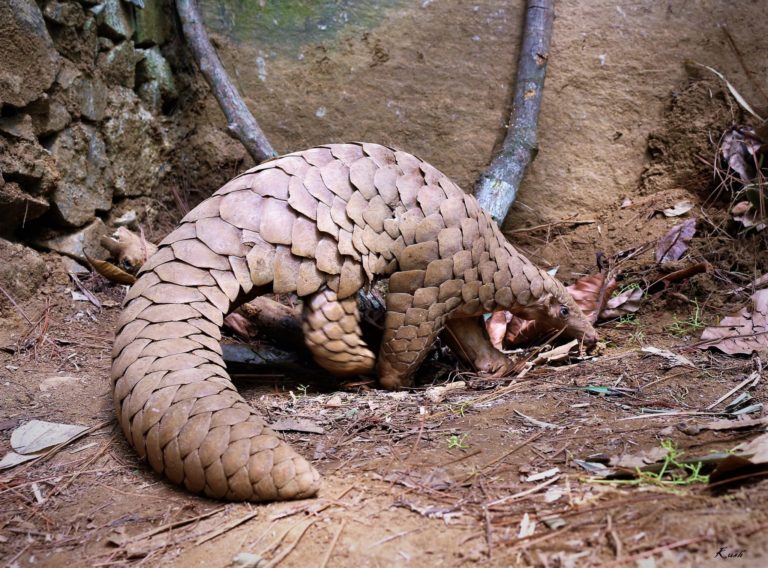 The World Health Organization has categorized the novel coronavirus disease (COVID-19) as a pandemicin light of its spread around the world. Ever since the first cases emerged in the Chinese city of Wuhan last December, there’s been much speculation — and misinformation— about the origins of the virus. And while scientists suspect it may have come from a market in Wuhan when a diseased animal was consumed or butchered, spilling over into the human population from there, the issue is far from settled.

WCS is also providing regular updates on wildlife-related issues surrounding COVID-19, and has taken to Twitter to address some of the most common rumors about the disease. These range from the demonstrably false — that the virus was manufactured in a lab — to the unfounded (for instance, that we know with full certainty which animal host passed the disease to humans).

“It is most likely that the evolutionary or ancestral host was a bat,” Chris Walzer, executive director of heal that WCS, told Mongabay. “What we don’t know is how the virus got into humans and which possible intermediary host it passed through.”

Corona viruses are a group of viruses with exceptionally high mutation rates that are known to exist in bats, rodents, camels and cats, making them prime for jumping from animal hosts to humans. The viruses that caused the outbreaks of Middle East Respiratory Syndrome (MERS) in 2012 and Severe Acute Respiratory Syndrome (SARS) from 2002-2004 are categorized as corona viruses.

Viruses naturally mutate and are able to recombine, sharing different components to create new viruses. So wildlife trading and meat markets, where multiple live species are kept together and butchered on the same surfaces, prove a perfect breeding ground for novel pathogens.

“The animals are captured in the wild (or alternatively raised on a so-called wildlife farm) and transported to a market, where they interact with other species from other locations,” Walzer said. “Here, the animals are confined under stressful conditions, exchanging excrements and thus viruses before being slaughtered on-site. This allows for blood and organs to be exposed and increases the interface to humans.” 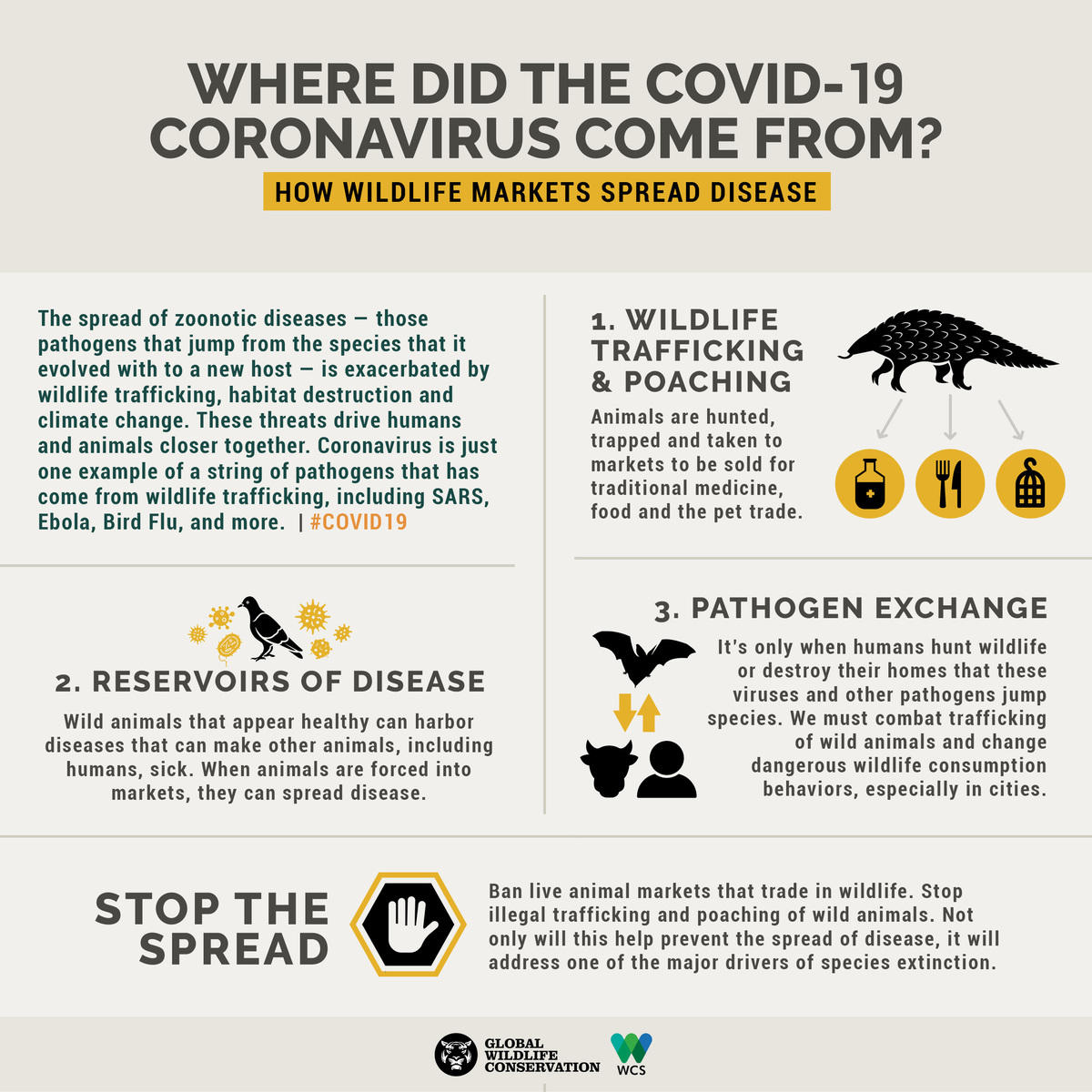 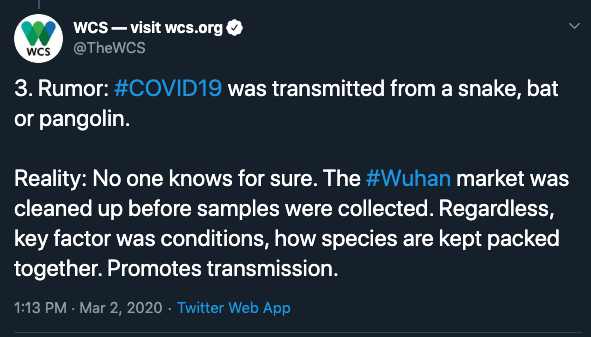 “It’s just a numbers game,” Walzer said. “If you just put enough species together and allow them to share viruses and then put a lot of people in contact with the animals and their parts, then you just invariably will have a virus that can enter a human cell and replicate and, in rarer occasions, transmit from human to human.”

Given the clear risks both to biodiversity as well as to human health, scientists at WCS and GWC are calling for a permanent ban on wildlife trafficking and live animal markets. 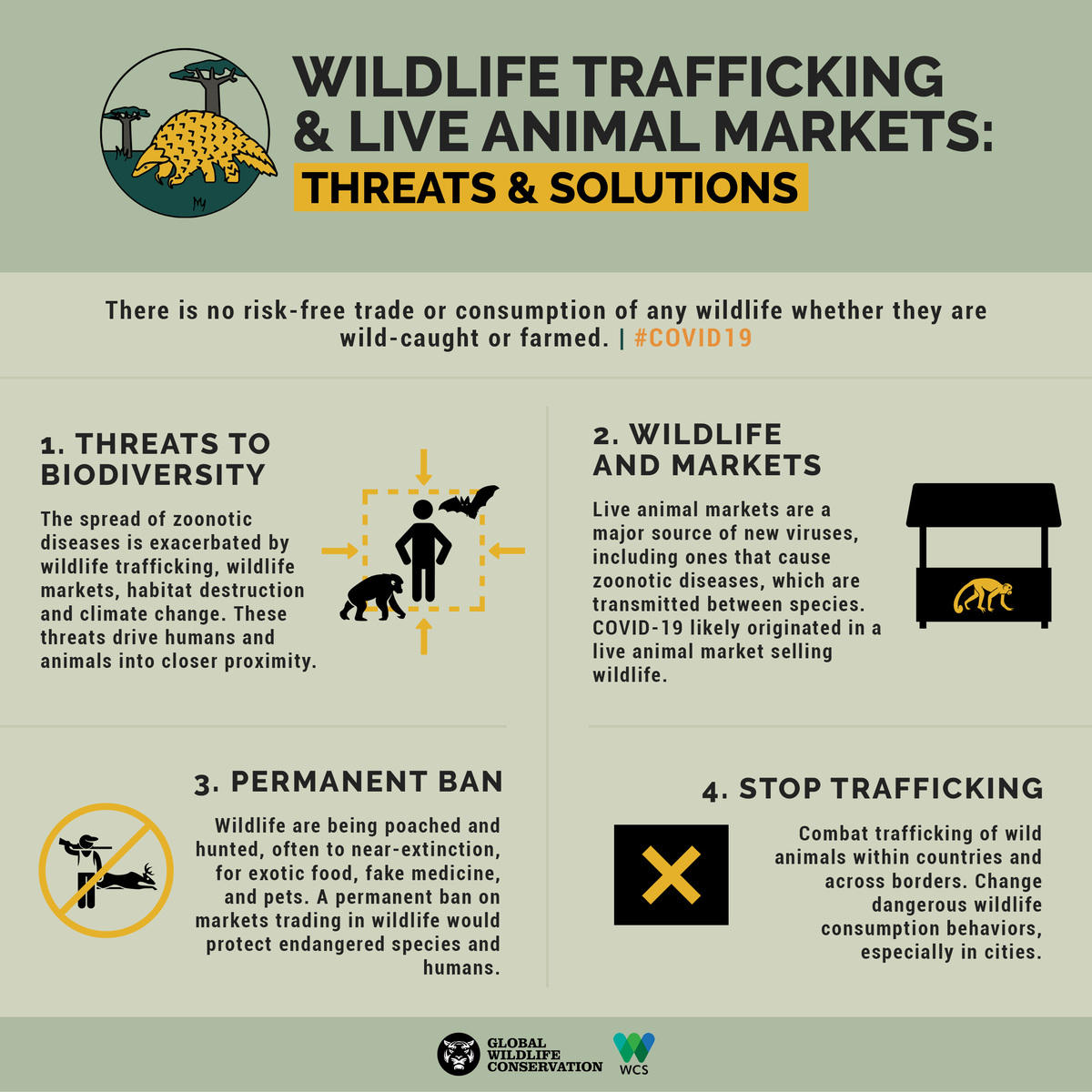 “Taking China’s lead, I think there will be a domino effect in the region, as all of these neighboring countries are highly interdependent and their markets are connected,” Walzer said. “These countries have legislation for livestock in place. Now, they are asking how to best regulate wildlife. What laws, expertise and monitoring are needed to really implement this legislation in a meaningful way?”

“Public attention can fade quickly. But once legislation is in place, it is there to stay.”

Cambodia, Laos and Indonesia have not made a formal statement yet on bans, but Walzer says these countries have indicated they are looking into regulating the wildlife trade and investigating what needs to be done.

“The world needs country after country stepping up to prevent future viral outbreaks by banning the trade and consumption of wildlife.” Hoang Bich Thuy, country director of WCS Vietnam, said in a statement. “If just one country continues to allow the trade in wildlife, communities across the world will continue to suffer and pay the price.”

This article by Liz Kimbrough was first published on Mongabay.com on 13 March 2020. Liz Kimbrough is a staff writer for Mongabay. Find her on [email protected]_