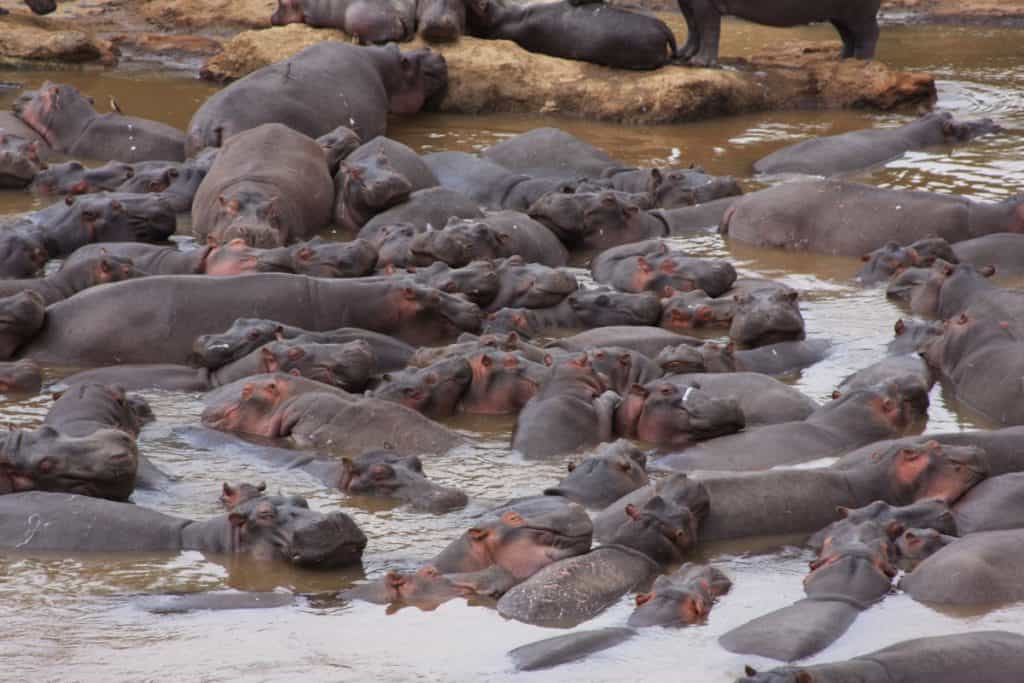 In the Mara River in Kenya, fish die in the thousands every now and then. And the hippopotamus is to blame, a new study has found.

Hippos (Hippopotamus amphibius) spend a considerable amount of time in rivers to cool off their bodies. They also spend a lot of time defecating in the water, their tails swishing like propellers as they violently spray their dung around.

In the Kenyan portion of the Mara that flows through theMaasai Mara National Reserve, there aremore than 4,000 hippos. And they poop a lot, flushing about 8,500 kilograms (18,740 pounds) of feces into the river every single day.

When it rains, this abundant excrement gets flushed downstream, sometimescausing low-oxygen conditions that end up killing large numbers of fish, researchers report in the study published in the journal Nature Communications.

It was in 2010 that Christopher Dutton, an aquatic ecologist at Yale University, U.S., and his colleagues first realized that something strange was going on in the Mara River. They had installed a water-quality probe in the river, one that could measure dissolved oxygen, and what they saw surprised them.

“We noticed that there were some extreme drops in dissolved oxygen during a few flood events and that sometimes, there would be a massive fish kill event,” Dutton told Mongabay. “We were very surprised at the frequency of the crashes in dissolved oxygen.”

Dutton added that this phenomenon in the Mara had previously gone undocumented because “it is very hard to keep a dissolved oxygen sensor working in a river with Nile crocodiles, hippos and other large wildlife.”

The researchers thought of a few possible explanations, but soon began wondering if the Mara’s resident hippos had something to do with the fish deaths. A series of experiments later revealed that the hippos were indeed responsible.

Overall, the researchers found that during the dry season, water flow in the Mara declines, and oxygen-poor water accumulates in hippo pools. Dutton’s team deployed a remote-controlled boat armed with a sensor to determine the water chemistry of hippo pools, the areas where hippos tend to congregate. They found that the pools were not just oxygen-depleted because microbes were using much of the dissolved oxygen to digest hippo feces. They were also full ofammonium, hydrogen sulfide, methane and carbon dioxide — by-products of microbial metabolism.Ammonium and sulfide arepotentially toxic and could be contributing to the fish deaths, the researchers say.

When it rains heavily, the feces-laden, oxygen-poor water gets flushed downstream, resulting in fish deaths, the team found. Over three years, the researchers recorded 55 flushing flows — instances when intense rain increases the river flow to twice its normal rate — and found that dissolved oxygen levels fell during 49 of those events. In 13 of these events, oxygen levels went extremely low and lasted for hours — a condition that’s stressful for fish, the researchers say. As for mass fish kills, the team recorded nine of those.

“In the Mara River system, flushing flows are important for cleaning hippo waste out of pools, but the accumulated toxic chemicals and deoxygenated water have severe impacts on aquatic life downstream,” co-author David Post, an ecologist at Yale University, said in a statement.

What this shows, Dutton said, is that “in a natural river with a large population of resident hippos, they can load enough organic matter to cause frequent crashes in dissolved oxygen during floods and that the aquatic species present have likely evolved in response to this frequent disturbance.”

These fish-kill events also become a great source of food for the scavenger community in the Mara-Serengeti ecosystem.“Once a fish kill happens, the fish are typically all consumed or washed downstream within a day or two. The scavengers are really able to capitalize very quickly on a fish kill event,” Dutton said.

It’s not just the hippos that shape the Mara River’s ecosystem in surprising ways. Last year,Dutton and his Yale colleague Amanda Subalusky published a study showing that the drowning of thousands of wildebeest in the Mara during their annual mass migration provides a pulse of food and nutrients to the river ecosystem.

“Our research shows that inputs from both hippos and wildebeest have large impacts on the river food web and ecosystem, and they interact in complex ways that we are still working on untangling,” Dutton said.

This article was written by Shreya Dasgupta and published by Mongabay.com on 31 May 2018.