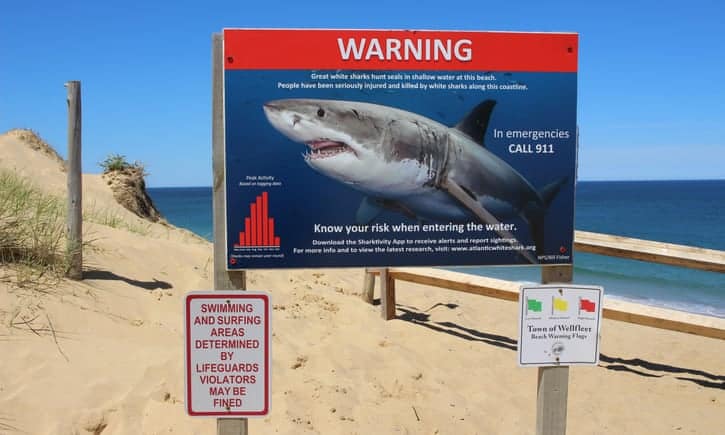 When beachgoers arrive at Cahoon Hollow Beach in Wellfleet on Massachusetts’ Cape Cod peninsula, the first thing they see is a large sign displaying a photo of a great white shark.

It reads: “WARNING. Great white sharks hunt seals in the shallow water at this beach. People have been seriously injured or killed by sharks along this coastline.”

It is a little less than two miles north of here at Wellfleet’s Newcomb Hollow Beach that 26-year-old Arthur Medici was attacked and killed by a great white while boogie boarding last September.

His death represented the only fatal shark attack in the United States last year and the first such death in Massachusetts since 1936.

Cape Cod embraced the notoriety, making the animal something of a mascot: the great white appears on T-shirts and shop signs and regular screenings of Jaws are held during the summer. In Massachusetts, you can even get the apex predator on your license plate.

But now, like the fictional town of Amity in Jaws, Cape Cod worries about what the arrival of deadly attacks will mean for its tourist economy.

Greg Skomal, a senior scientist with the state’s department of fish and game and Massachusetts’ leading shark expert, says an increasing number of great whites have traveled to Cape Cod in recent summers, drawn by a rebounding seal population.

Hunted relentlessly since European settlers first arrived in New England, the seal population has been recovering since the implementation of the 1972 Marine Mammal Protection Act, which prohibited the hunting, killing, capturing or harassment of marine mammals like seals and dolphins. Meanwhile, the great white shark received limited protections from the federal government in 1997 that are believed to have increased its population.

“For every animal there’s a predator. And in the case of the seals, that predator is the white shark,” said Skomal.

Massachusetts has always been within the range of great whites, but now they are migrating here from the south in greater numbers every summer.

There have already been three shark attacks on people further south, off the coast of North Carolina, this month.

Skomal says there are probably more great whites along the rest of New England’s coast, but that Cape Cod’s topography – like a giant sandbar sticking out in the ocean – means humans run into the sharks’ hunting paths more often and that sharks get drawn into shallow water more easily.

The attack on Medici in September came just one month after a New York neurologist was attacked while swimming in Truro, just north of Wellfleet. Meanwhile, in the era of drones and phone cameras, images of sharks feasting on seals just off of Cape Cod’s shores have become almost routine in the summer.

Steps are being taken to try to keep surfers and swimmers safe. Signs like the ones in Wellfleet have been up for several years now while at beaches that lie within the National Park Service-administered Cape Cod national seashore, there are purple flags bearing the outline of a great white.

“[The flags] fly all the time because the sharks are always out there,” said Brian Carlstrom, the national seashore’s superintendent.

After last year’s attacks, bleed control kits are being placed on beaches and members of the general public are being encouraged to take “stop the bleed” classes. Towns are investing in all-terrain vehicles so that injured persons do not have to be carried off the beach by hand. Towns are planning on keeping lifeguards on the beaches longer, past Labor Day. And with spotty cellphone coverage on some beaches, emergency call boxes are being installed to ensure that 911 can be reached.

A myriad of shark detection and prevention devices – from shark nets to buoys that detect sharks – have been proposed, but none have been implemented.

“No single old or new technology is a silver bullet,” said Skomal. “And just because some technology might work some of the time in some part of the world doesn’t mean it’s applicable to Cape Cod, which is a much different environment.”

Some have encouraged the more drastic measure of culling seal or great white populations, but that approach faces significant legal hurdles as well as environmentalist backlash.

Carlstrom said it is important for swimmers to be aware of the risks before entering the water and stressed that those who do go in should avoid areas where seals are present, stick close to shore and if surfing, do so in a group.

Although the increase in great whites could give vacationers pause, their presence could be a draw for some.

“It’s one of the few places in the world where you can see or have the opportunity to see white sharks from shore,” said Carlstrom.

At Wellfleet’s beaches, the shark signs appeared to be somewhat of a tourist attraction of their own recently, with visitors posing for photos and selfies in front of the warnings.

Those who live on Cape Cod are not writing off the beach entirely.

“If I see a seal, I’m not swimming,” said Karen O’Quinn of the Cape Cod town of Dennis Port. Although she did not rule out swimming on Cape Cod’s beaches this summer, she added: “If you swim here, you take your life in your own hands.”

Veronika Alarie, 20, works at the Nauset Surf Shop in the town of Orleans. After the attacks last year, she says she’s seen a drop-off in surfboard sales and rentals.

But Alarie, who has a shark made up of flowers tattooed on her right forearm, said sharks will not deter her or others from the Cape.

“I grew up here. I’m going to be in the water no matter what,” she said.

This article was first published by The Guardian on 18 June 2019.