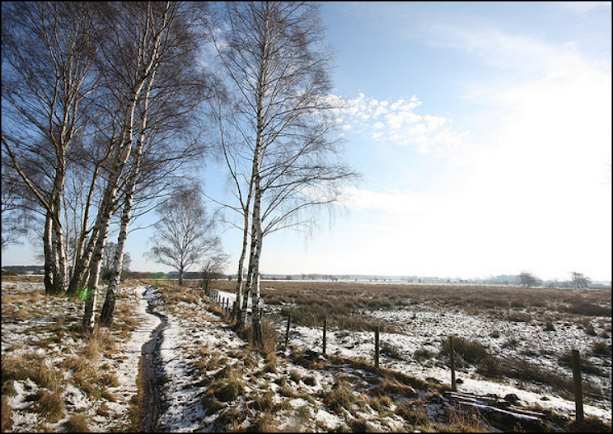 Thanks to joining a local birding network I’ve become aware of several sites in the York area that have somehow escaped my notice over the years … fantastic and thrilling yes but also a little humbling to realise that I’ve been birding man and boy in these parts for close on 30 years with blinkers on as far as some places of local interest are concerned!

So I keep getting email alerts of good local birds like Green Sandpiper, Jack Snipe and the occasional Marsh Harrier from a site called Tilmire – its a designated SSSI (site of special scientific interest) nr the village of Heslington and close by York University. I haven’t researched enough but I guess you would call it an extensive area of rough grazing land intersected by several dykes and containing marshy fringes .. yep I reckon that covers it!

I popped down there one afternoon earlier this week and spent a very pleasant few hours sloshing around in the snow. No ‘pipers or harriers but I did have a couple of Common Snipes, a couple of Buzzards and at least 5 Kestrels (always a good sign of available food sources), along with plenty of finch flocks – Linnets, Greenfinch, Goldfinch, Chaffinch and Yellowhammers, 3 Bullfinch and 12 Skylarks.

I also got my best Fieldfare shots of the year so far – there were many about (c200) along with smaller numbers of Redwing. Here’s the a couple of the good Fieldfare shots plus one ‘snow’ shot at distance that came out ok with some cropping!

Looking very incongruous in the snow there were also a few Peacocks pecking around on icy tracks … I’ve never quite got why people keep these birds or if indeed, strolling around as they do, anyone can claim ownership but they invariably present themselves as reasonable photo opportunities, so here you go!

Amateur photographer and birder. UK based and semi retired, I work part time for the Yorkshire Wildlife Trust. The rest of the time I take photographs of the wildlife I see on my travels in the UK and abroad recording what I see on my blog Timbobaggins Abroad .