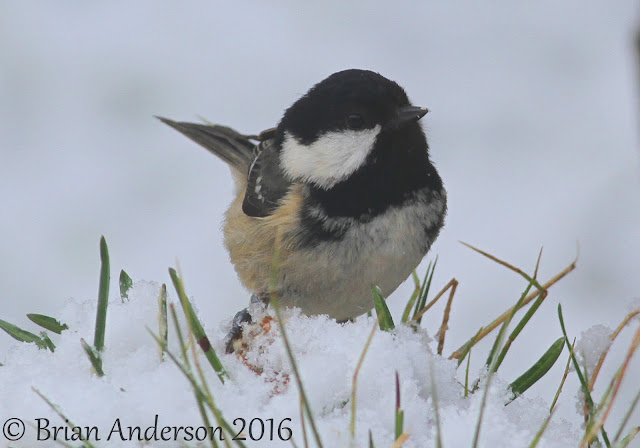 This morning I returned to Loch Garten for the Caperwatch arriving at 5.30am to find the volunteers already had a Caper in the scope much to my delight having not seen one last year at all but another guy had spend five days on the spin getting up at silly oclock to get his first ever so he was doubly delighted. By 5.45am the snow started falling heavily again and any view of the bird was quickly lost which disappointed the late comers.

I left satisfied with the year tick and sat in the car park for a while to enjoy the birds at the feeders which included Crested Tit, Treecreeper, Great spotted Woodpecker, Coal Tit and Siskin.

Crossbill were in the car park but I couldn’t tell if they were Scottish or not. One guys logic was that if they’re in Scotland they must be Scottish until I reminded him we were in Scotland but it didn’t make us Scottish!

Following my early success I moved north to Burghead where I scanned the coast for the reported White-billed Diver to no avail. I later found out I was looking in the wrong place.

With Portsoy now only twenty miles away I headed across passing through Elgin and then Cullen which is the nicest town I’ve encountered here so I’ll be returning for a better look in the future.

At Portsoy conditions were really bad with big waves and a strong wind coming straight in off the sea so I used the car as some kind of shelter at the top of Marine Terrace to give a higher point of view to scan.

There were lot’s of Gannet, Fulmar and Auks about along with a few Shags. I found a couple of Great northern Divers and then after nearly an hour of scanning I had a White billed Diver in the scope.

I returned to the harbour were a few Eider posed for the camera and then set off for home via Lochindord which ended my annual Scotland trip.

In summary I collected 15 year ticks picking up most of the Scottish specialities and a lifer with the Black Duck.