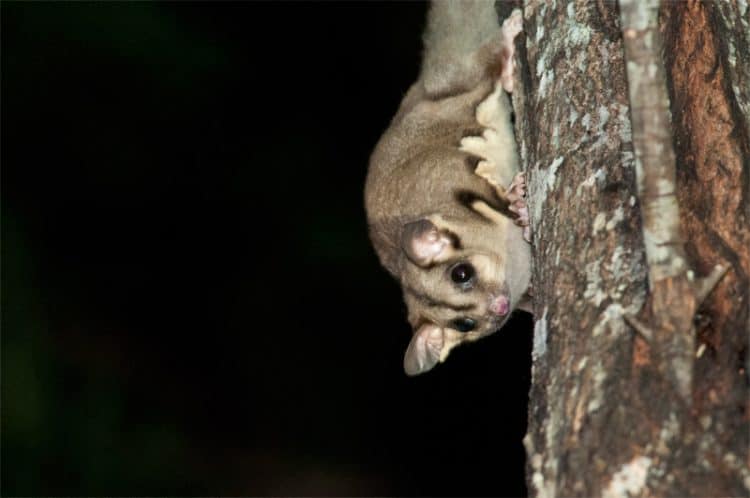 When most of us think about wildlife watching, cities are not the environments that usually come to mind. Typically urban development is associated with habitat destruction and local extinctions. However, not all wildlife species are equally affected by human activities and some have adapted and become quite successful in human-dominated landscapes. Sydney – Australia’s largest city also managed to retain a fraction of the area’s former biodiversity throughout centuries of development.

Botanical Gardens are also a good place to see Grey-headed flying foxes – another of Sydney’s common mammals. In fact, the flying foxes congregate in Botanical Gardens in such huge numbers that they decimate the trees on which they roost, presenting a serious problem to the park’s management.

Late afternoons at Botanical Gardens can also be good for Bush rat  – which is a native Australian rodent, that can be distinguished from a feral Black rat by having a much shorter tail. Generally, the Bush rat’s tail is smaller or equal to its body length, while the Black rat’s tail is always longer than its body.

Most of the other terrestrial mammals in Sydney are considerably harder to spot. There are Long-nosed bandicoots on the North Head, in Sydney HarborNational Park.

Swamp wallabies and even Eastern grey kangaroo can sometimes be found at golf courses, particularly on the North Shore. But the best place to see the kangaroos is the Euroka Clearing in the Blue Mountains. An occasional Short-beaked echidna can be spotted in suburbia though Royal National Park is a much better place to look for this species.

Like the rest of Australia, Sydney has its fair share of feral mammals. There are feral cats, foxes, rabbits and of course, black rats.

One of the best places to look for mammals around Sydney is the Royal National Park. The possible sightings include Short-beached echidna, Eastern pygmy possum, Sugar glides, Feathertail glides and Greater glides.

Another good spot is Watagans National Park near Morisset, about 1 hr drive north of Sydney. I assisted first-year biology students on a field trip at Watagans and we caught some Brown antechinus and Dusky antechinus in Elliot traps. Spotlighting at night I have seen Pademelons, Red-necked wallabies,  and Greater gliders. There is also a population of Brush-tailed rock wallaby living on the steep cliffs in Watagans.

Lucky for Sydneysiders, our city sits on one of the world’s most beautiful harbours and that introduces an entirely new dimension to mammal watching in Sydney – the marine mammals.