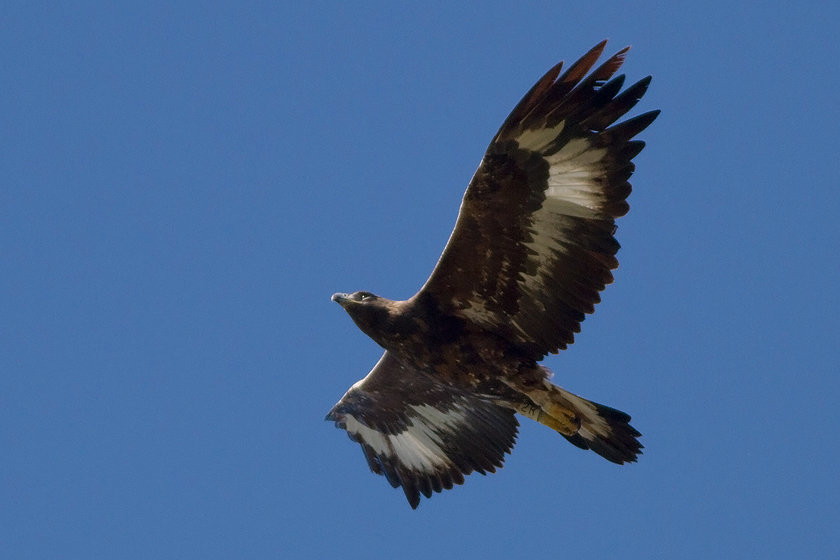 We had a very confiding Golden Eagle yesterday afternoon close to Tahivilla. The bird circled over our heads when we stopped the car and watched it, obviously curious at what we were doing. After a few circles it headed towards the Sierra de La Plata and The Strait.

The moult on the eagle was fairly extensive and a good few new feathers are visible. My friend Javi Elorriaga estimates that this is a fourth calendar year bird (3rd plumage) and that it is unusual to see such moult on this species in winter. The pvc color ring looks yellow in colour but it is more likely to be a very faded white color that has the alphanumeric code ‘2R’.

I looked on the database for ringed/tagged Golden Eagles and I’ve asked colleagues and friends if anyone knows the bird’s origin but as yet I’ve had no positive identification. I had confirmation that it isn’t a French bird. More emails have been sent and I’m awaiting replies.

Last year at the Algorrobo watchpoint near Tarifa a similar bird with a white pvc ring was seen but it’s identity is still a mystery.Large eagles on migration often roost around Torre de La Peña or above Facinas on the track to La Semilla. Both sites have large Eucalyptus which attracts them as a secure roosting site.Thanks to all who have been helping with the search.Stephen